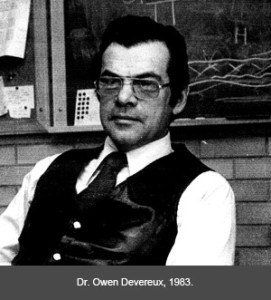 A new scholarship fund has been established in memory of the late, beloved Owen F. Devereux, who led the Metallurgy Department at UConn from 1983-98 and served as a distinguished faculty member for over three decades.  The Owen Devereux Scholarship in Materials Science & Engineering will be awarded to two exceptional undergraduate students each year. To contribute toward the scholarship fund, please contact Rachel Marshall at rmarshall@foundation.uconn.edu or (860) 486-2983.

The Materials Science & Engineering Department, which ranks among the top 25 public programs nationally, enjoys undergraduate enrollments of 130 students and graduates approximately 35-40 each year.  The department continues a very strong graduate and research program, which currently enrolls more than 75 M.S. and PhD candidates.

Dr. Devereux, who died in June of 2012, joined UConn as an associate professor in 1968 with expertise in corrosion and surface science.  He was among the first faculty members recruited to UConn’s newly established Department of Metallurgy (now Materials Science & Engineering) and the Institute of Materials Science. (View additional photos here.) 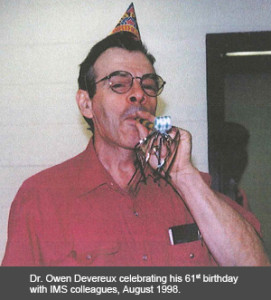 strong partnerships with industry that remain a hallmark of the School of Engineering today.  He is credited with the establishment of two important hubs of UConn-industry collaboration, the former Grinding Research & Development Center (1988) and the Precision Manufacturing Center (1991), and although neither center survives, both laid a sound foundation for many of the School of Engineering’s collaborations today.  Dr. Devereux also championed and established the baccalaureate degree program in materials science and engineering.

As a graduate student at the Massachusetts Institute of Technology, Dr. Devereux contributed as a co-author on Interaction of Plane-Parallel Double Layers, published by MIT Press in 1963, a year after he received his Ph.D. His scholarly record also included more than 50 technical publications. At UConn, he also founded the joint TMS/ASM student chapter and formed the department’s first Industrial Advisory Committee. According to Dr. Brody, before retiring in 1999 Dr. Devereux also initiated and led a strategic planning exercise that helped guide the department into the third millennium.

Dr. Brody recalls: “In the 1990’s, Owen recognized a plan was needed to rejuvenate the department as several of the strong faculty members neared retirement age. He led the department in writing a strategic plan that included a focus on recruiting strong young faculty members and raising the department’s international visibility. Two strategies were to broaden the faculty expertise to include materials science and engineering (MSE) and to offer a full undergraduate major in that area. The current rejuvenated department is now populated with internationally recognized scholars with expertise covering the broad MSE discipline and offers a popular MSE major with graduates in high demand among regional industries. Owen envisioned the department rising to a top 10 nationally recognized program, and I believe his efforts put the department on a trajectory likely to fulfill that vision.”

Before beginning his academic career, Dr. Devereux worked for six years in industry as a research chemist with Chevron Research Co., Corning Glass Works and Chevron Oil Field Research Co. This experience informed his keen interest in applied engineering and his commitment to academic/industry partnerships.

Though Dr. Devereux retired from UConn in 1999, his legacy remains vibrantly alive among the colleagues and former students who were fortunate enough to interact with him. Some of their recollections appear below.  (Read more and share your own on his Memorial Guestbook.)

Dr. Wilson, a Research Staff member in the Corrosion Science & Technology Group at Oak Ridge National Laboratory, recalls that when he arrived at UConn, each of Dr. Devereux’s graduate students was pursuing a different focus area. “He was extremely wide ranging in his knowledge, very good at subjects in the oxidation and corrosion area, and an excellent writer/editor,” notes Dr. Wilson, who adds that Dr. Devereux was a very good advisor and a significant influence on his career. Dr. Wilson recalls that Dr. Devereux and his wife, Livi, had a nearby farm with horses, dogs and cats and “during the summer, students would sometimes help with the task of moving hay from a truck into the hayloft of the farm’s barn.”

“Besides his many accomplishments as a faculty member and Department head, Owen was also well known for his faithful and somewhat forlorn-looking dog (which accompanied him in spite of all the rules) and his cowboy boots. He was a fine person and nobody’s fool,” recalls professor emeritus Montgomery Shaw.

Ping Luo (Ph.D. ’95) says, “Even though he was not my thesis advisor, Dr. Devereux took the time to mentor and advise me throughout my graduate program. He really cared about every student and worked hard to help each of us succeed. It was my experience with him that enabled me to become a successful business owner as the co-founder of Berkeley Advanced Biomaterials, Inc., an orthopedic implant company in Silicon Valley. He was the most helpful and compassionate professor I ever encountered.”

Ockert Van Der Schijff (Ph.D. ’90), a Senior Manager of Materials & Corrosion Engineering at Exponent, remembers his mentor fondly. As a disenchanted first-year graduate student at another university, Dr. Van Der Schijff visited a cousin during the holidays who was a post-doc at UConn. As he strolled around campus, he walked into the IMS building (where a prominent sign on the door stated “No Animals Allowed”) and happened upon Dr. Devereux at work, with his very real dog gracing the office. A pleasant conversation ensued, and the next fall, Dr. Van Der Schijff transferred to UConn accompanied by his wife Elsabé.

Dr. Van Der Schijff recalls, “The thing that has stayed with me is Owen’s demeanor; he was always calm, with an even-keeled personality – a man of utmost integrity. He was always willing to give guidance and serve as a sounding board. I was an older student who had taken a sabbatical from South Africa to earn my Ph.D., so my time in the U.S. was constrained by having to complete my degree within a shortened time frame. He helped us settle in and find housing; he and Livi even hosted us for dinner (after saying hello to the animals in the barn, which included a donkey and a turkey named Fred). Owen represented a balance of accomplishment and contentment. He had proven himself and was a leader in the field, so he was not single minded about papers and proposals: he was supportive of his graduate students and trained us not only in our academics but also for life and the workplace. He was a real friend.”

When he entered UConn as an M.S. student, Ross Boland (B.S. Mech. Eng./Metallurgy ’77; M.S., Ph.D ’79, ’01), a forensic scientist employed in a family business, was among Dr. Devereux’s first graduate students.  “He was a brilliant thermodynamicist but also something of a cowboy,” he recalls, who wore jeans and cowboy boots, drove a truck and kept a farm. “Dr. Devereux’s office was located across the hall from the research lab, he recalls, and “he would work in his office without the lights, choosing the natural light streaming through the window instead.” Dr. Boland recalls that his mentor had customized his office to feature an unusual furnishing – a strung glass bead divider separating two sections. Another fond memory was formed one late fall day when, gazing out the window following an early freeze, as soft rain fell outdoors, Dr. Devereux and his advisee (Dr. Boland) left the office and worked side-by-side driving fence posts into the softening soil at the farm. “His unique personality was a rarely-found combination of being well grounded in life while also engaged in high-tech endeavors.”

Professor Theo Kattamis, a former colleague who remains active on the MSE faculty, says, “I found Owen to be knowledgeable, kind-hearted, very altruistic and always ready to offer sound advice on technical as well as personal issues.” Another former colleague who knew Dr. Devereux well is professor Harris Marcus (former director of IMS from 1994-2013), who remarks, “Owen’s good nature, leadership in the Metallurgy Department and his endless support of IMS will always be fondly remembered.  He was truly a gentlemen and a friend.” Professor emeritus John Morral, who succeeded Dr. Devereux as Department Head, recalls that upon stepping down, Dr. Devereux bequeathed a book of inspirational quotes. His favorite was “There go the people. I must follow them, for I am their leader” (attributed to 19th century French politician Alexandre Auguste Ledru-Rollin). Dr. Morral adds that when he left UConn to become Department Chair at The Ohio State University’s Materials Science & Engineering Department, “I tried to model myself after Owen, who believed the role of Chair was to serve the faculty.”

Across the years and countless experiences, Livi accompanied him on his journey. They shared a deeply romantic relationship that included daily love notes. In her husband’s memory, Livi Devereux recently penned an affectionate poem, which reflects the special bond they shared. Read it here.