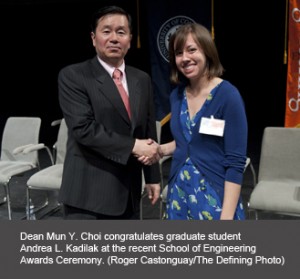 On the evening of March 22nd, the School of Engineering celebrated the academic achievements of outstanding undergraduate and graduate students during the annual Awards Reception and Ceremony held at the Jorgensen Center for the Performing Arts.  View the video here and photos here.

The evening began with a gala reception in the Jorgensen Gallery, whose walls were graced by a selection of exquisite wood block prints by Connecticut artist Lynita Shimizu. As proud parents, scholarship donors and students connected prior to the awards ceremony, visitors had the opportunity to view posters summarizing student research projects underway in faculty laboratories across the School of Engineering.

During the awards ceremony, Dean of Engineering Mun Y. Choi thanked and acknowledged the many corporate, faculty and alumni donors in the audience who have chosen to invest in outstanding engineering students.  He said that the support provided to engineering students by generous donors carries inestimable value, noting “Behind each donor, there is a story. In many cases, it’s a story about perseverance, hard work and also success.”  To underscore this point, he described the lives of four alumni donors whose tenacity, dedication and commitment to giving back exemplify the qualities that all members of the UConn engineering community admire and aspire to.

He began with the late Jack Stephens (’47), who taught civil engineering at UConn for nearly 40 years.  “As a child growing up during the Great Depression, he faced many hurdles, many hardships. As a young man during World War II, he served this nation with great distinction. He marched with General Patton’s Third Army across Europe and liberated many parts of Europe. For his bravery, he was awarded two Bronze Stars. After receiving his graduate degree from Purdue, he applied this passion toward teaching and mentoring. Through his talents, he trained over 4,000 students.”

Moving on to alumnus John Longobardi (’51), he noted, “As a child growing up in Connecticut, with his father serving as a shoemaker, he kept a lot of jobs throughout school. Eventually, he was drafted in the Army and served in Africa during World War II. After the war, he earned his degree and led a distinguished career with Sikorsky for 36 years, working on advanced manufacturing technologies in rotorcraft design.” Crediting the nurturing environment provided by his parents as important to his success, in their honor he established the Pasquale & Maria Longobardi Scholarship.

In the case of brothers Sam (‘50) and Stephen Altschuler (’54), Dean Choi said,“Their father was head of the electrical department at Norwich 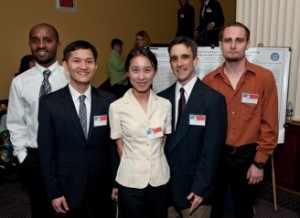 Tech, their mom a teacher in New York City. The family valued education and also giving back to the community. After earning their degrees, both pursued MBAs and independently established businesses that are still going very strong today: Altron and Altek.”  The Altschulers have supported the Altschuler Family Scholarship since 1993.

Dean Choi urged the scholarship recipients to take the time to learn more about the donors, each of whom has a story and to “continue their virtuous cycle by giving back to the next generation.”

For the recipients, these scholarships make a world of difference.

Sean Morrisroe, a Mechanical Engineering (ME) junior, received a W. Donald Johnston Memorial Award and an Engineering Undergraduate Merit Scholarship.  Thanks to these scholarships, he said, “Instead of picking up another part-time job, I can focus on my studies.” As a Presidential Scholar at UConn, Sean’s tuition is covered, but he works as a paid Resident Assistant in one of UConn’s dormitories to reduce expenses associated with room and board, fees, books and other costs.  His scholarships “Have made a huge difference for me as an undergraduate.  Scholarships have allowed me to excel academically because I haven’t had to worry so much about money,” he said.  Sean plans to attend graduate school after earning his bachelor’s degree.

Fellow ME junior Matthew Roberts, who received the Winthrop E. Hilding Undergraduate Scholarship in Engineering and Winthrop & Dolores Hilding Scholarship, concurred, noting that a family member recently underwent an intensive joint surgery.  Besides the pride he felt in bringing a smile to his parents’ faces, he said that not having to worry about college expenses gives the family greater financial security.  Matthew, 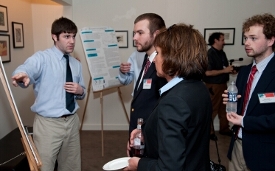 currently a paid student researcher in the laboratory of Dr. Robert Gao, will trade pay for course credit next fall to complete needed credits for his enrollment in the accelerated ME master’s program at UConn.

Environmental Engineering junior Claudia Szerakowski, who received the Jack E. Stephens Scholarship this year, and the Paul Krenicki Endowed Scholarship in Sustainable Energy in 2011, said “Receiving these scholarships puts less financial stress on me and my family so that I do not have to struggle to balance studying and working to pay off bills at the same time. It also leaves me more time to join extracurricular activities and participate in community outreach. I can also stretch out my college savings in order to pursue a higher degree after receiving my bachelor’s degree.”

During the evening, outstanding graduate students were awarded more than 180 competitive federal, foundation, international and society fellowships; and 237 high achieving undergraduates were awarded scholarships totaling over $520,000. View the full list of 2012 scholarship and fellowship awardees here.