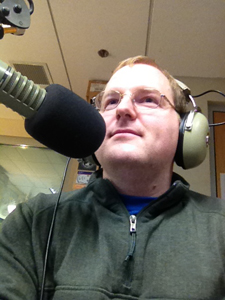 Dr. Jeffrey McCutcheon, an assistant professor in the Chemical & Biomolecular Engineering Department, is intent on bringing science, engineering and technology to a broader audience where preconceptions can be discussed openly and overturned. To that end, in April he launched a weekly, two-hour talk radio program on UConn’s noncommercial college and community radio station, WHUS (91.7 FM; www.whus.org/listen-live), called Science Friction.

He chose an edgy name to underline the show’s focus, which squarely targets scientific controversies. The program currently airs Mondays from 1-3 p.m. and reaches a listening audience well beyond the boundaries of the UConn campus.  According to Ryan Caron King, the station’s general manager, “The geographic broadcast area of WHUS’s 4,400 watt signal reaches slightly past Hartford, into western Rhode Island and into southern Massachusetts.”

In explaining his decision to launch the radio show, Dr. McCutcheon says, “A gap exists between scientists and the general public, and some view science and technology as the doom of humanity.  For example, there are debates about certain scientific issues such as climate change, nuclear power, alternative energy and water resources.  I believe that by giving scientists a platform to discuss these controversies, we can allay some of the public’s fears surrounding technology and science.”

“I look at this as a platform much like NPR’s ‘Science Friday.’  Each week I present a different topic or series of topics covering all subjects STEM [science, technology, engineering, mathematics]. I interview students, professors, entrepreneurs, people from the business arena – and not just strictly from UConn but from around the country. It’s important to get a broad spectrum of individuals to talk about the challenges they face and see in certain areas, and to allay fears that nonscientists may have about these technologies.”

His shows have generated eager calls from listeners on either side of the topical debate, and he notes that most callers have been complimentary and respectful.

To date, Dr. McCutcheon, who directs the Sustainable Water and Energy Learning Laboratory (SWELL), has interviewed engineering professors Daniel Burkey, Mei Wei, and Allison MacKay; plus student leaders Kelsey Boch (’13), Breanne Muratori (’13) and Andrew Silva (’14).  He has lined up six more programs for the summer, including interviews with professor Ranjan Srivastava, local businessman Kevin Bouley, Interim Engineering Dean Kazem Kazerounian and students participating in his NSF-sponsored Research Experiences for Undergraduates (REU), who will be carrying out novel research at UConn that has a business focus.

Radio is a life-long interest of Dr. McCutcheon’s, whose father, a professional guitarist, has hosted a classical guitar radio show for 20 years on public radio in Dayton, Ohio.  “But what really got me into radio was listening to baseball games. I’m a big Cincinnati Reds fan and grew up listening to Marty Brennaman and Joe Nuxhall.  When I was older, I began listening to news-talk radio. Radio is a great way to convey news, because radio broadcasts have to be clearer, in a way, than television broadcasts. Not to mention you can listen to radio anywhere, any time without it interfering with whatever you’re doing.”

Science Friction will play a central role in a proposal he is submitting to the National Science Foundation’s Early Career Development program. In his proposal, Dr. McCutcheon will articulate his intention to use this platform as a vehicle for broadening societal awareness of his research as well as that of other scientists, engineers and technologists.

Dr. McCutcheon is planning to make the show’s podcasts available via RSS feed to broaden listenership. He is eager to engage local teachers as well so that the program can reach students as they are beginning to examine scientific concepts and can learn from a spirited discussion involving alternate views.