Senior Design: Building The “Heart and Soul” of an Electric Car (Part 1) 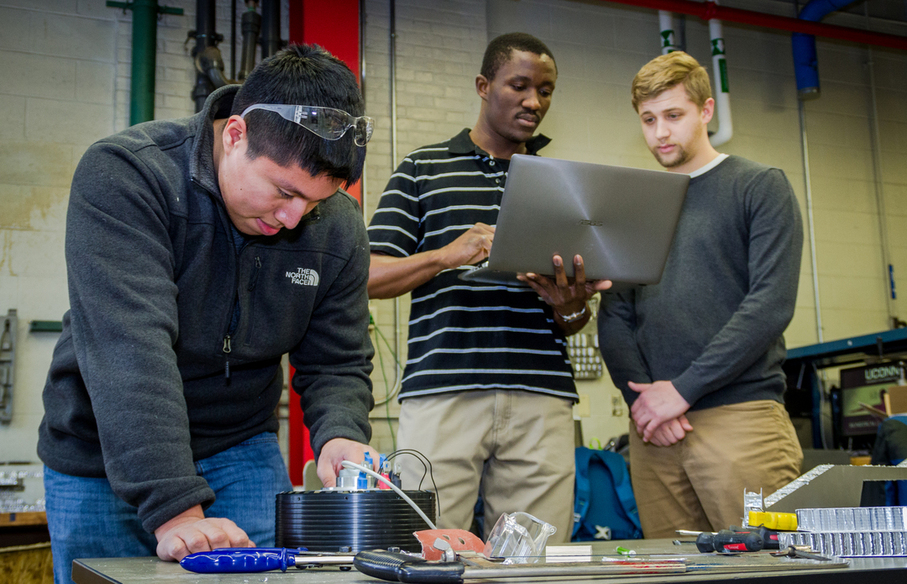 Twenty years ago, if you stood on a sidewalk and watched cars go by, chances are high that you would see little-to-no electric cars driving down the street. In 2017, electric car sales were higher than ever, with nearly 200,000 all-electric cars sold in the U.S. With the popularity of models from Tesla, BMW, and Chevy, consumers are starting to warm to the idea of charging their car, rather than filling it with gasoline. Because of that popularity, four Senior Design teams, including an electrical and computer engineering team featuring seniors Daryl Biron; Ernesto Ortega-Hernandez; and Alain Tshipamba, are working to complete an all-electric car for a national competition in June.

The portion of the car that Biron, Ortega-Hernandez, and Tshipamba are working on is the “heart and soul” of the vehicle—the powertrain. The sponsor of the project, the UConn Electric Motorsports, was originally formed in the spring of 2017, with the intention of getting like-minded students together to build a car that could compete in Formula North, a collegiate competition taking place during in the summer of 2018. The advisor of the team is Professor Ali Bazzi.

Biron said he originally got involved after having interest in the club in the spring 2017 semester:

“I got involved with the club personally, in the spring semester last year, and at that time there were only two electrical engineers involved, and with an electric car, you need a lot more than just two,” Biron said. “So, I was pretty much thrown onto the powertrain team, which is essentially everything that the motor controls, and I didn’t really know much, so I had to do a lot of research on my own, which became easier when Ernesto and Alain came onboard.” 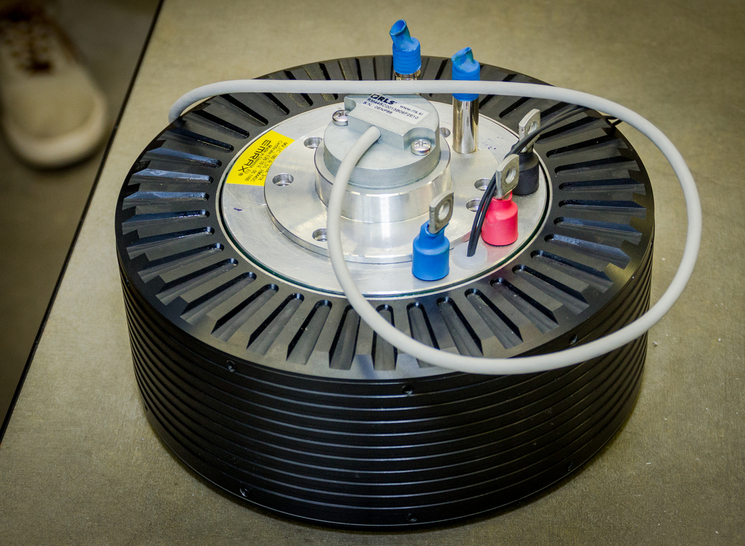 The car itself will have a chassis made of inch-thick aluminum honeycomb sheets, which will make it one of the lightest and most torsionally rigid chassis seen in completion, according to the UCEM website. The car will also use pieces and materials that will make the car extremely flexible and ergonomic, with components like adjustable pedals and a removable seat.

The permanent magnet motor, which the group only received recently, after a wait of a few months, was designed by EMRAX, and provides 80 kilowatts of power, equivalent to 107 horsepower. Ortega-Hernandez said they had to jump through a lot of hoops before the motor arrived at its destination:

“Initially we had some funding problems, which were later solved, but when we went to order the motor, we ran into issues, because it was coming from Europe, EMRAX required a wire transfer for payment, and they weren’t an approved UConn vendor. So, luckily, EnviroPower, the company where Daryl interns, offered to become a vendor, and then ordered the motor through their channels—but when all was said and done, the entire purchasing process took three months.”

The rest of the powertrain consists of an emDrive300H Controller from Emsiso, and several other components, which will connect to a battery apparatus being constructed by another ECE team.

Tshipamba also said that getting all the calculations fined-tuned was one of their biggest early challenges:

“Luckily, when we went to our advisor, he really helped us find out what we were doing wrong. Originally, we had issues with the simulation models, which were due to using parts from different libraries that didn’t communicate well, and were also not adjusted to our parameters regardless of tuning, so we realized that we had to create our own parts based on the mathematical model.”

But Biron said that a lot of these impediments eventually turned into worthwhile accomplishments:

“Actually, getting the motor and fixing our mathematical models was a huge breakthrough for us,” Biron said. “At one point, we were talking about ordering the motor the beginning of November, but obviously things got in the way.”

Now that they have the motor, all their components, and all of the modeling squared away, the group is looking forward to getting to work, and putting their focus towards putting all the pieces together for April and beyond.

To learn more about the UConn Electric Motorsports, and their all-electric car, please visit https://www.uconnelectricmotorsports.com.

This article is part of a multi-part series on engineering students, and their journey through senior design. Part two of this team’s journey will come out in early April 2018.