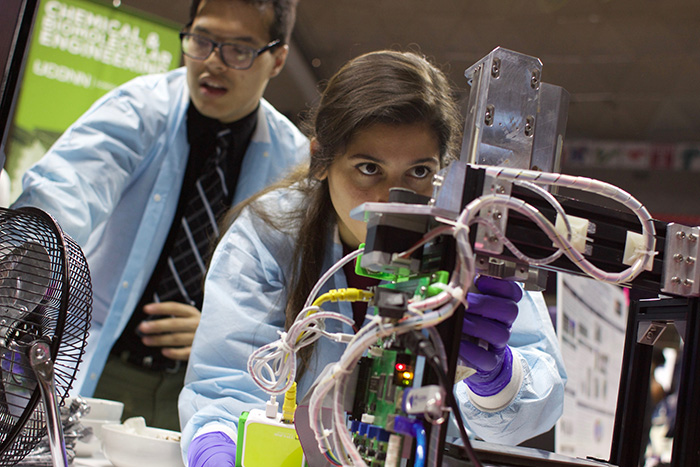 Nur Hamideh uses a 3D chocolate printer  that her team made.

Every year, engineering seniors spend the spring and fall semester at UConn designing senior projects, often working with industry partners. That year long process culminates in the Senior Design Demonstration Day. This year, over 180 teams filled Gampel Pavilion to demonstrate the work they’d dedicated a school year to producing, with projects ranging from automated firefighting bots to a 3D Printer for chocolate.

These capstone projects bring together all aspects of their undergraduate education into a cohesive experience, allowing students the opportunity to work on real-world industry problems. This grounds their learning in a project that requires not just the technical know-how they’ve spent years gaining, but also requires collaboration with teammates, making a schedule, and presenting information in a coherent manner. Below is an example of one Senior Design Project, as well as award winners from each department. 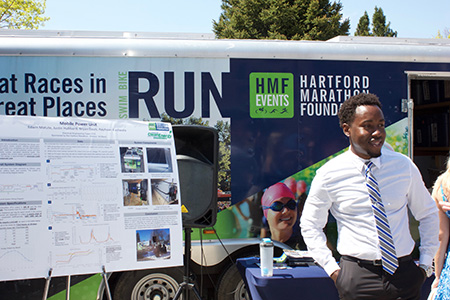 This project was tasked with converting the electrical equipment that the Hartford Marathon Foundation (HMF) uses during races to entirely green technology. Previously, the HMF used gas generators to power items such as a laptop, an arch inflator and a sound system.

“Sustainability has been an important part of our flagship event, the Eversource Hartford Marathon. We’re looking to spread that environmentally friendly focus to our 30 other events throughout the year,” Anderson said.

The team, made up of Electrical Engineering majors Bryan Davis, Justin Hubbard, Rayhaan Kasliwala and Edwin Matute, designed and installed a solar panel array for the roof of a trailer, while inside the trailer they placed batteries, a charge controller and other necessary electrical equipment. When they created this design, the team took a number of variables into account, from weather to electrical and vehicle codes.

“The variability of the weather is something we had to account for. We designed our system to basically operate under every possible worst case scenario. … If there’s very little sun out, we’re relying solely on our batteries, which will have to be charged up during the week prior to the event. There’s a lot of variabilities, so we had to make our system very strong,” Davis said. 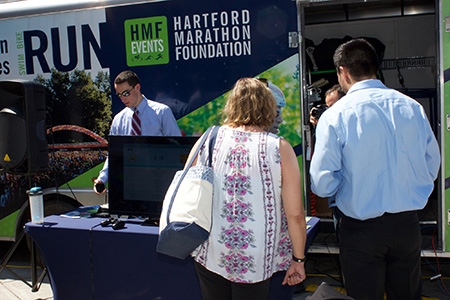 Bryan Davis shows electronics running on the solar setup his team made for the Hartford Marathon Foundation. (Christopher LaRosa/UConn Photo)

One of the variables they addressed was incorporating DOT regulations that involve a trailer.

“Our main issue with the DOT didn’t have to do with the electrical, it just had to do with fitting solar panels on top of a moving trailer. Their main concern was keeping the trailer under a certain height, because when you go under a bridge it could be scrapped off,” said Hubbard.

Hubbard also said that keeping the space in the trailer available for storage was something they balanced with the needs of their system.

The team’s system has effectively been used during marathons. Their battery backup is designed to last for six hours using all of the Marathon’s system- with a little bit extra for charging the spare cell phone. Anderson said he was pleased with how the project turned out.

“It’s been a great collaboration. They’ve been responsive and understanding. They’ve really done their homework into what we do and how this can benefit us,” Anderson said. 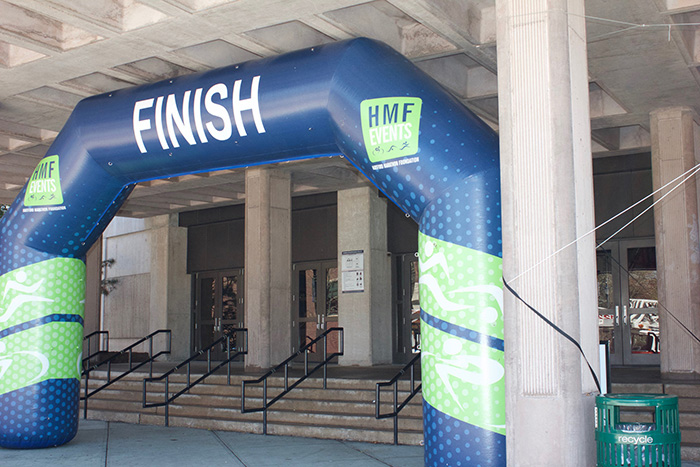 The entry to Gampel Pavilion, with the arch used by the Hartford Marathon Foundation in place. (Christopher LaRosa/UConn Photo) 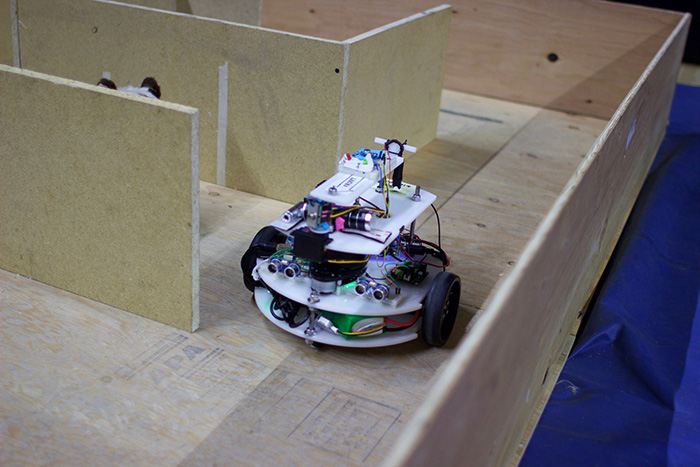 A firefighting drone in a maze that can find and extinguish a candle. (Christopher LaRosa/UConn Photo) 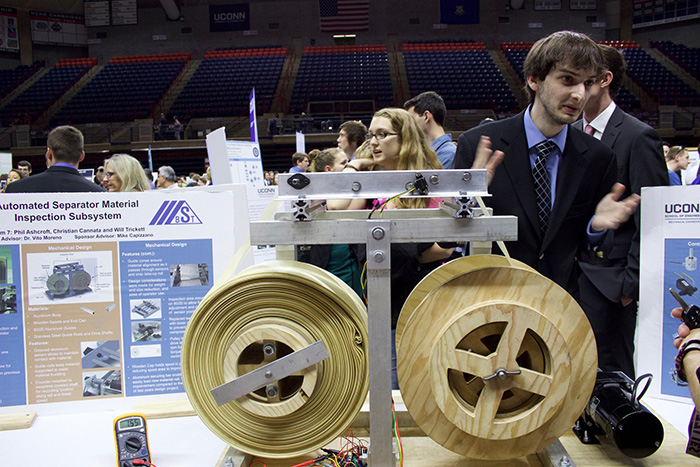 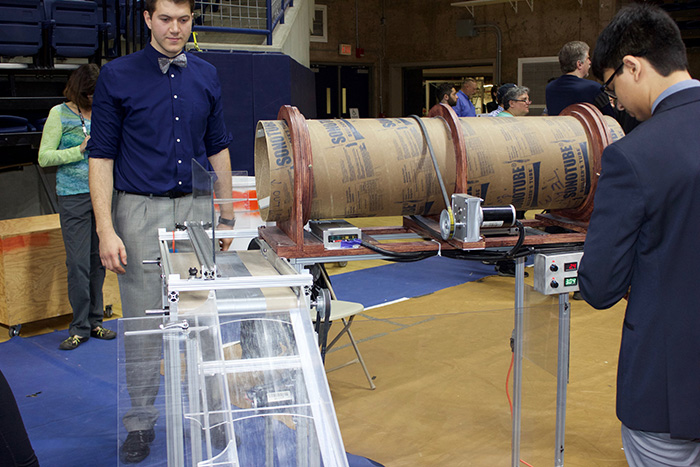 Xhoni Agolli (right) and Prayush Singh operate their Transmission Spring Sorting and Stacking Device, which uses a tumbler to separate springs, then a slide sorts the springs according to the direction they bend. (Christopher LaRosa/UConn Photo)

For a gallery of pictures from Senior Design, click here.

Every department selects the best Senior Design teams from within their discipline. Below are the winners. For teams with students from multiple departments, only the students within the awarding department are listed.

Management and Engineering for Manufacturing