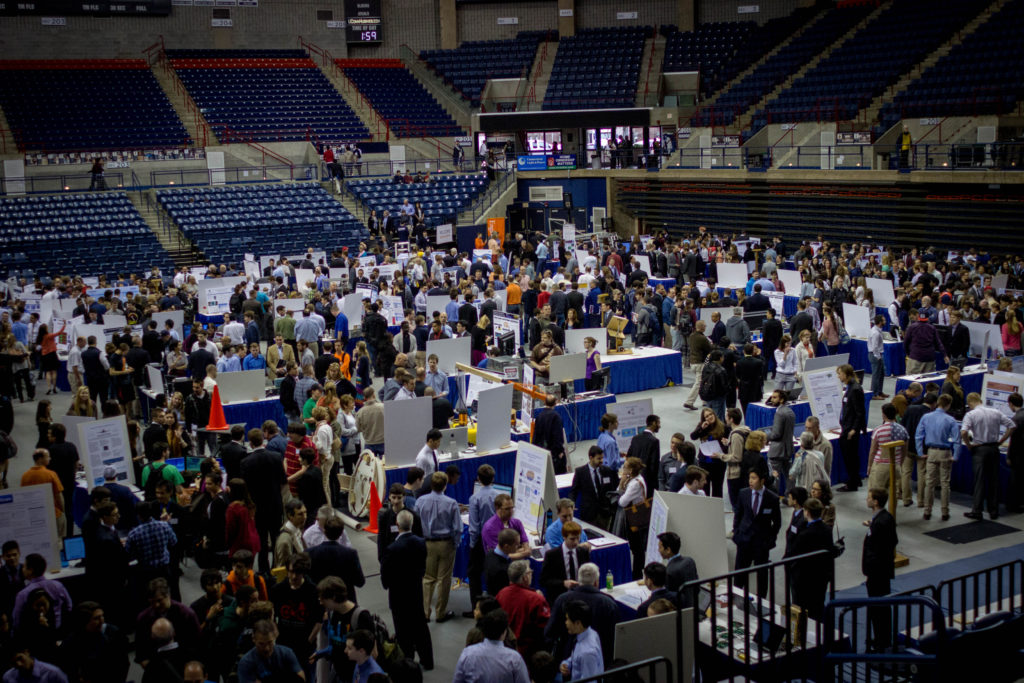 Every year, engineering seniors spend the spring and fall semester at UConn designing senior projects, often working with industry partners. A partner will provide an engineering problem for a group of students with a particular interest to work on. Over 170 teams of seniors will present their work on April 29 at Gampel Pavilion starting at 1 p.m.- visitors are welcome to attend!

These capstone projects bring together all aspects of their undergraduate education into a cohesive experience, allowing students the opportunity to work on real-world industry problems. This grounds their learning in a project that requires not just the technical know-how they’ve spent years gaining, but also requires collaboration with teammates, making a schedule, and presenting information in a coherent manner.

Industry partners are able to work with students and get first-hand impressions about these young engineers who are poised to enter the job market.

UConn Engineering spoke with two teams of seniors and private sector collaborators about the experience. 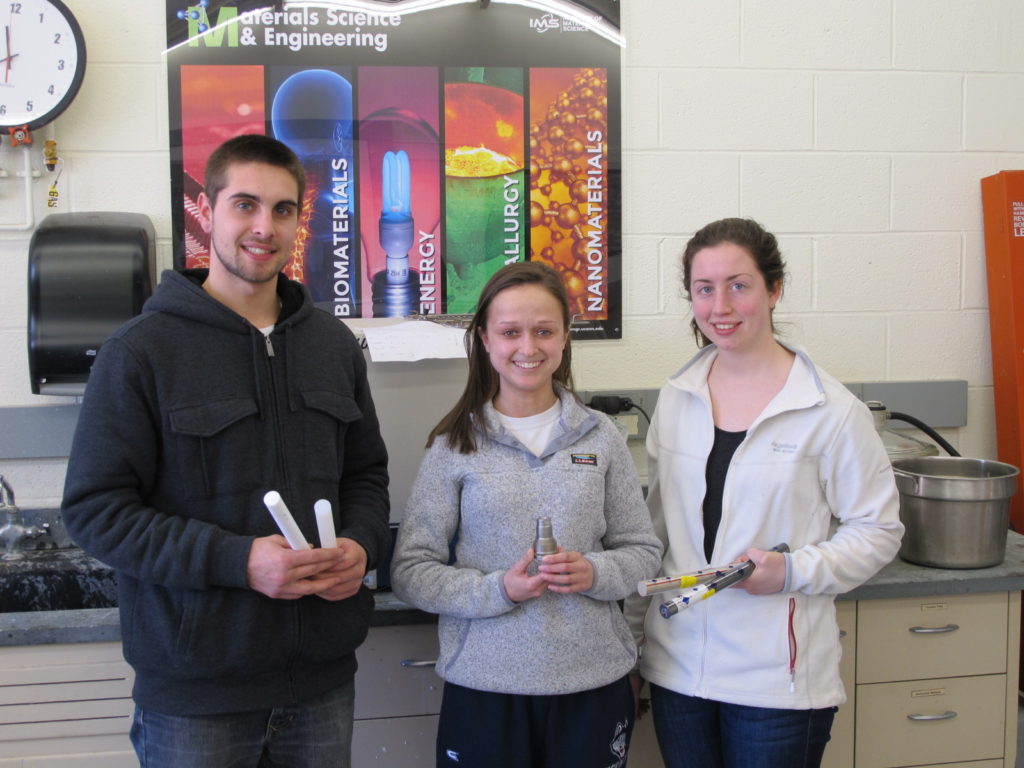 Zachary Quinn, Tori Radovic, Kathleen Coleman hold the materials they have been testing.

This team was tasked with picking a new material to use for a portion of a diesel engine- a transfer pump end cap. Quinn said that the end cap is a necessary part, where the fuel flows into the pump.  The part in question has caused difficulty in machining and production.

“So the material rusts. Currently, it’s steel. They also have problems machining it. There’s such tight tolerances in the fuel pump that you have to be very careful, it’ll affect the assembly and function of the pump,” Coleman said.

The team tested a number of different materials as a replacement, eventually settling on four different polymers to test. After narrowing the field to two, they made an official recommendation to Stanadyne.

Keith Simpson is an industry advisor with Stanadyne who has been working with the senior team for the past year. He highlighted why his company is altering the material.

“The benefits of a non-metallic material would greatly enhance our pump by reducing distortion -of a thin cross section- through heat treat and eliminate some issues relative to machining.  One of the largest issues we have with our current material is rust, which is always a challenge, particularly from our outsourced supplier in India,” he said.

By improving those production issues, Stanadyne could reduce the failure rate of the end cap. Simpson also mentioned that if this project goes well, Stanadyne would possibly introduce alternate material components or product lines.

The process of interacting with their industry partner was another learning experience for the team.

“In the beginning, we didn’t have a lot of information to work with. That made us learn how to ask the right questions. I think that was more beneficial than them handing us everything. I think we learned a lot more that way,” Radovic said. 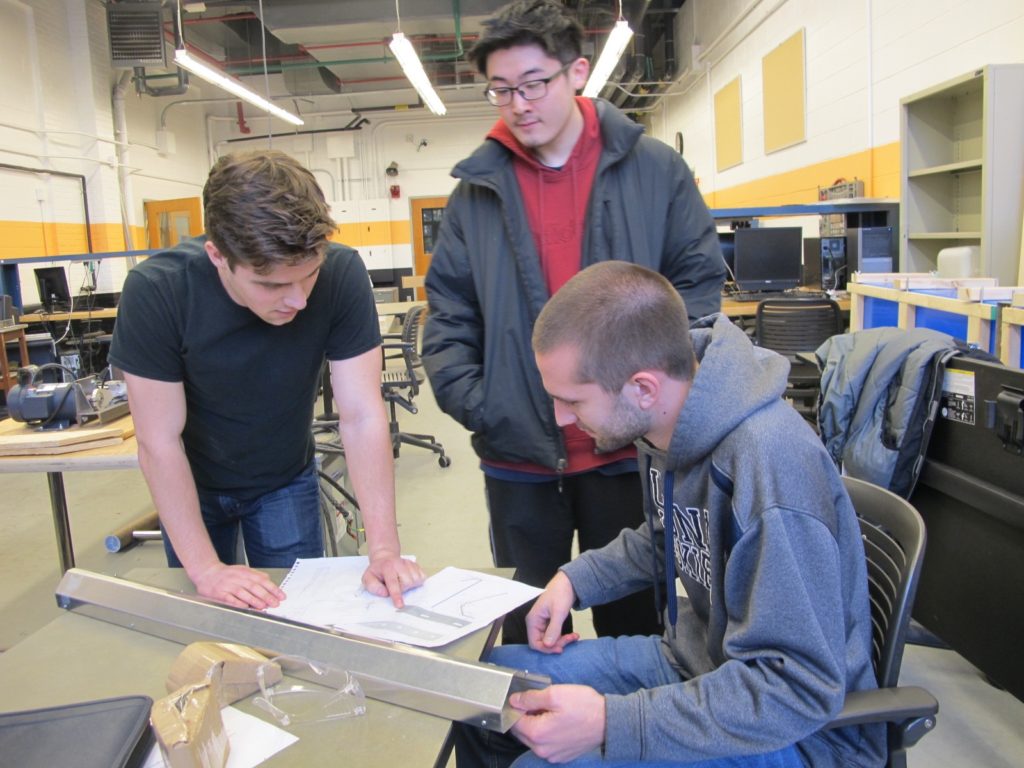 TRUMPF, one of the largest manufacturers of fabricating equipment and industrial lasers in North America, gave the team of Alex Dumschott, Clement Lee and Alex Trotman a project to improve the performance within an existing device. They were tasked with optimizing a vacuum system within a high capacity sheet metal laser cutting machine. The laser beam creates metal dust as it cuts. That metal dust must be effectively removed to ensure a safe working environment for the machine operator, a stable cutting process and a long lifetime for the equipment. The current vacuum system design has shortcomings, which results in more suction on one end of the machine than the other.

“These machines have already been built and sold and are currently in use. A part of our constraints are that everything needs to fit within the current model- there’s not a lot to work with in terms of space,” Trotman said.

Dumschott, Lee and Trotman said that much of their time has been spent on the preparatory portion of the project.

“Most of the work has been identifying where the problem areas are. If we had 5 years, there’s a lot we could do with the project but we have from September to April 29 to get this all done,” Dumschott said.

“A big chunk of that is just learning the (Finite Element Analysis) software itself,” Lee said, referring to the program they used to test their models and the airflow they allowed, which they weren’t initially familiar with. Finite Element Analysis is a computerized method for predicting how a product reacts to real-world forces.

Benedikt Buschle, a Mechanical Design Engineer with TRUMPF who worked with the team said that it’s interesting watching the team adapt to a more grounded project.

“It’s interesting to get to see them adapt. To see them go from the purely scientific world to the real world, the industry world,” Buschle said.

A part of that adaptation process was encouraging the students to do more hands on attempts, to make a prototype using TRUMPF’s machining resources. The team made a scaled-down model to test their theories out, and were eventually able to meet the company’s requirements for the project by identifying the area that caused the steepest pressure drops and redesigning with a more favorable internal geometry.

Walter Kampitsch, a Product Development manager with TRUMPF, said that students go through a familiar process when they go from the education world to the industry world.

“I see the pattern over and over, with the first experience manufacturing things and dealing with lead time. If the students come with a reasonable time frame, they’re able to get things done.  Otherwise it’s not going to happen. It’s a part of the reality check they go through,” Kampitsch said.

Adapting to the realities of business interactions is one of the strengths of the senior design program, Trotman said.

“It’s a good experience. I’ve had internships before and it’s pretty obvious that school and work are two different entities,” Trotman said. “In class, it’s often very clear what we’re looking for, but this requires more out of the box thinking. It’s the most application based thing we’ve learned.  We’ve had to pull skills from all of our classes.”