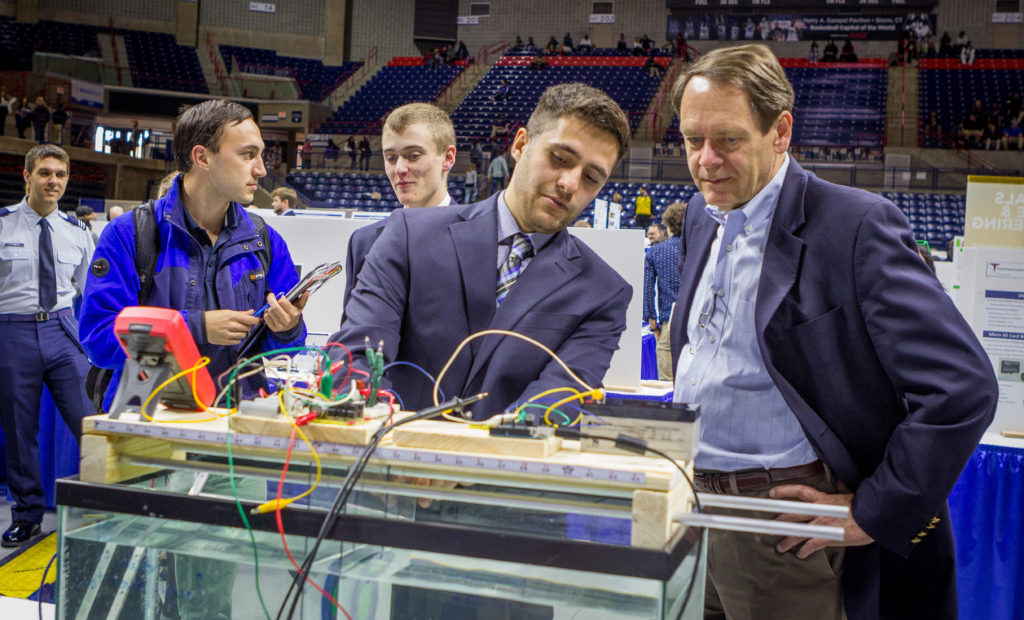 Every year, engineering seniors spend the spring and fall semester at UConn designing senior projects, often working with industry partners. That year long process culminates in the Senior Design Demonstration Day. This year, over 160 teams filled Gampel Pavilion on April 29 to demonstrate the work they’d dedicated a school year to producing, with projects ranging from a self-cleaning toilet to a device that brings a person with a movement disorder to an efficient cook stove for third world countries. 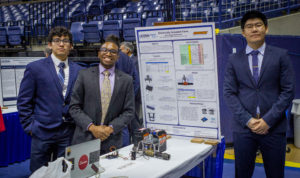 These capstone projects bring together all aspects of their undergraduate education into a cohesive experience, allowing students the opportunity to work on real-world industry problems. This grounds their learning in a project that requires not just the technical know-how they’ve spent years gaining, but also requires collaboration with teammates, making a schedule, and presenting information in a coherent manner. Two of the projects at Design Day are featured below. 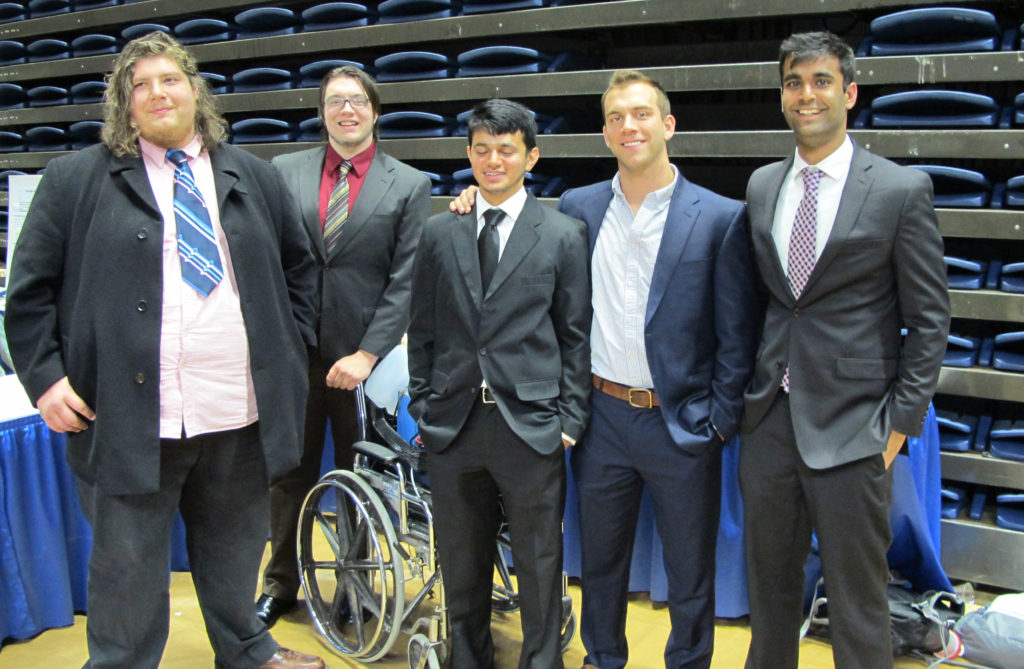 This project is designed to aid individuals with movement disorders, such as cerebral palsy, reliably get to a standing position with less stress on their joints, while still using some of their own movement power. A seat device raises a person from a sitting to standing position in an ergonomic manner.

This project had six students on it, three from biomedical engineering (Tylur Craddock, Keval Vyas, and Tapan Dalal) and three from electrical and computer engineering (John Hodorowski, Sean Kivney, Charles Fayal). The nature of the device requires two teams- one to make sure that the way the device stands a person up is comfortable and won’t injure them, another to make the machine work as efficiently as possible. This is the second year seniors had worked on this device- the previous team created a prototype that took 10 minutes to raise a person to a standing position, along with data on the best way for a person to stand. That project weighed 50 pounds.

“the previous year’s design helped a lot, they gave us a lot of data and basically let us focus on the how,” Kivney said.

“Last year, they did a lot of the theoretical work. We needed to take what they did and make something more marketable,” Vyas said.

The current version weighs 10 pounds and can elevate a person to standing in around 10 seconds. It also uses a smartphone app to control the movement. The version they displayed at senior design fits on a wheelchair.  They also added springs to the device, which supports the motor as the lifting begins, Hodorowski said.

“The most important aspect of this is helping people,” Craddock said. 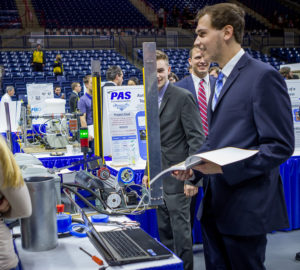 Sobranski, Basile and McSweeney in mechanical engineering were given a unique problem- they were to create a machine to wrap parts of different shapes and sizes in tape. PAS Technologies refurbishes parts for the aerospace industry, which requires a coating that is applied to only a portion of the part. To complete that process, the other portions are taped, which is currently done by hand.

Parts are of different sizes and shapes, though McSweeney said they are usually cylindrical.

“The biggest difficulty is definitely the part variability. Because PAS is refurbishing them, these aren’t like, consistent part geometries or materials. We have to have a highly adaptable machine that can conform to all sorts of things,” Sobanski said. “That was our number one challenge, creating a machine that can adapt to all the parts that PAS has come through their facility, to make sure that the machine would be useful and useable.”

The machine they were able to create rotates the parts while applying tape along a horizontal axis. Electric step motors governed by an Arduino microcontroller drive the rotation of the parts and the motion of the tape dispenser. The team also developed a graphic user interface to control the machine.