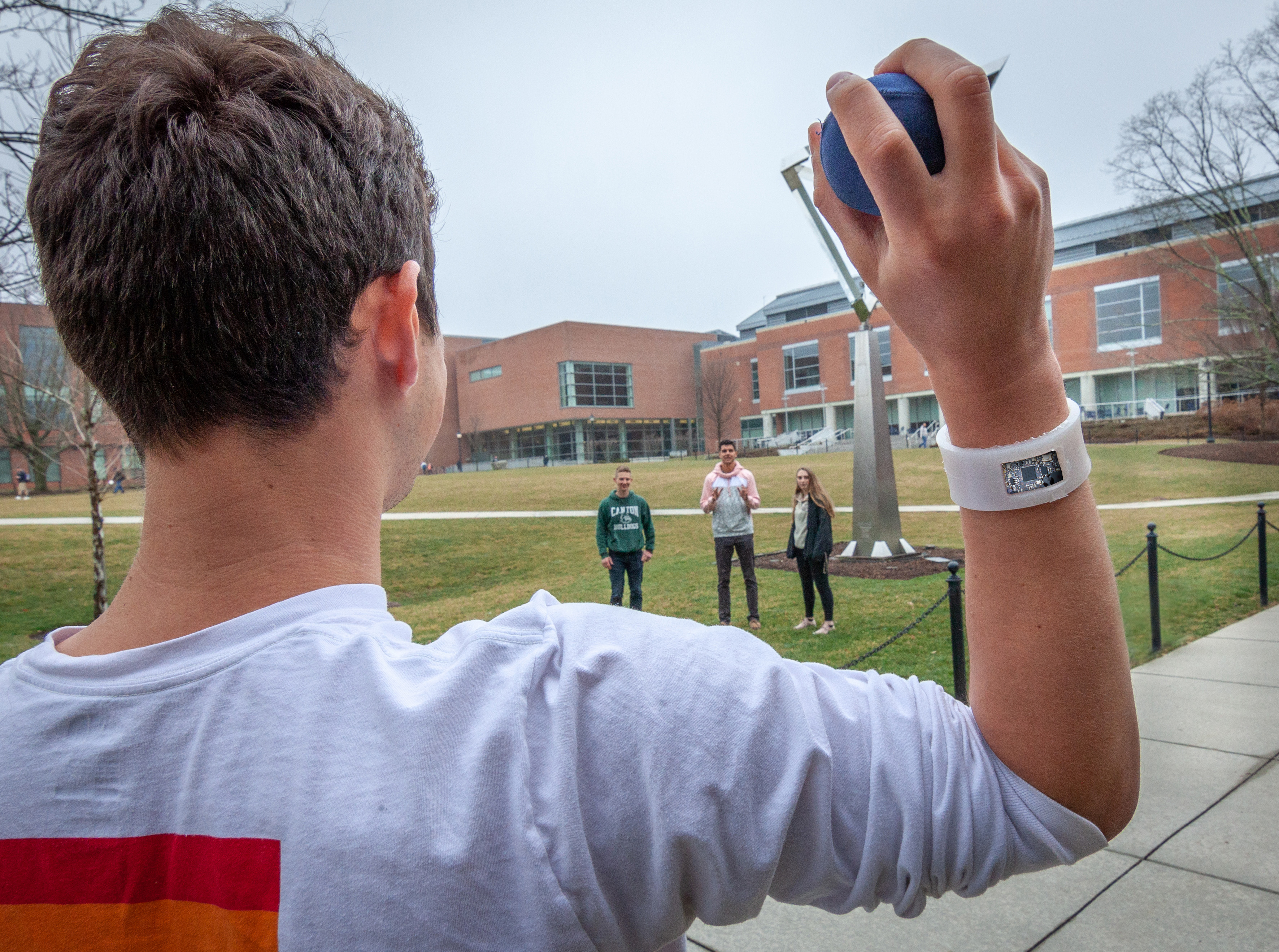 Hill throws a ball to his teammates, during a test of the  wearable device designed for Connecticut Children’s Medical Center. (Christopher Larosa/UConn Photo)

In fact, as the team rounds the corner towards their Senior Design Demonstration Day deadline, they have only faced a couple of bumps, according to team member Jared Hill:

Imbriaco expanded on Hill’s point, and said that the process of making the mold, from beginning to end, required several minute changes:

“The guys at the Machine Shop kept emailing us back with several suggestions on how to improve the mold, so Jared would have to go back and change the design in SolidWorks, only to have more changes after the initial,” Imbriaco said. “Because of how busy they are, it would often take a couple days in between each email.” 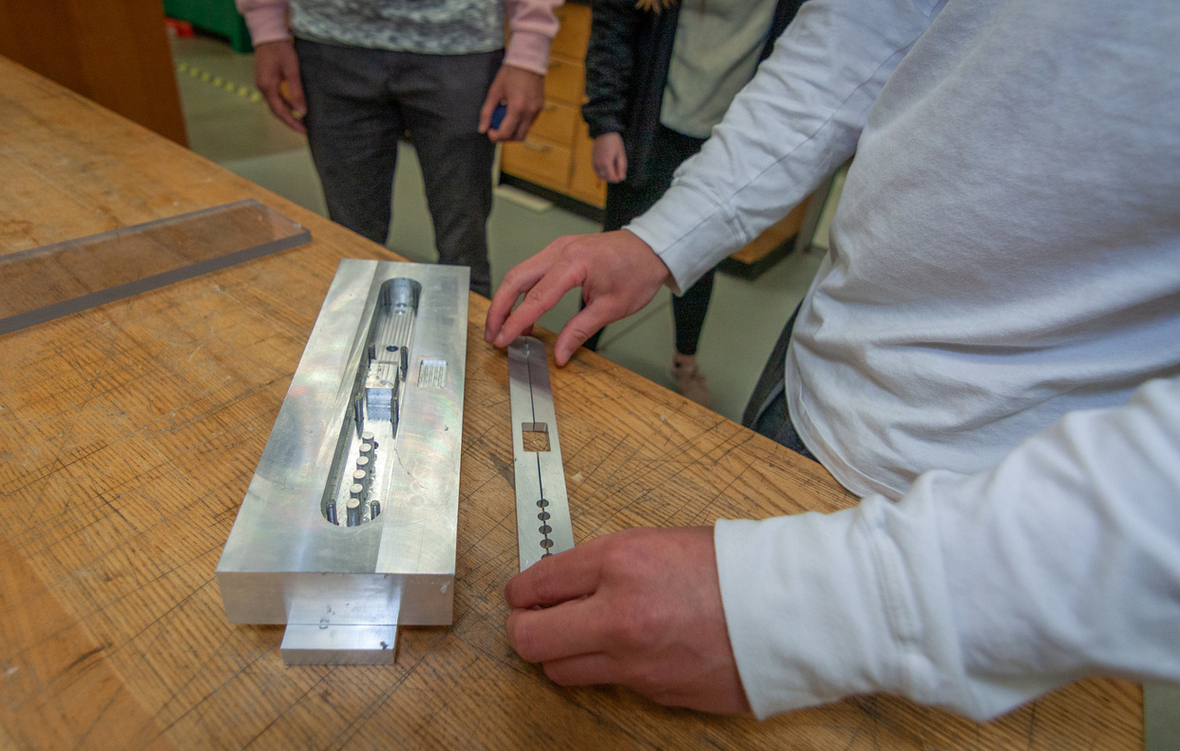 The metal mold, created by the Castleman Machine Shop, took several weeks of back and forth to come to fruition. (Christopher LaRosa/UConn Photo)

During most of their Fall semester, and through part of their Spring semester, Tim Gutowski, Chris Imbriaco, Jenna Clum-Russell, and Hill, with faculty advisor Dr. Matthew Solomito, were working on building a device that will help to mitigate severe elbow injury risk for youth, high school, and college pitchers who are sometimes throwing up to 500 high-velocity pitches in a week through competition, practice, and private pitching clinics.

According to the team’s research, studies have found that UCL injuries become more prevalent as a pitcher gets older, and faces more intense competition. One study found that 15 percent of all Minor League Baseball players and 25 percent of all Major League Baseball players have suffered at least one UCL injury during their career. But, high school-to-early college players bear the brunt of UCL tear surgeries, dubbed the “Tommy John Surgery,” to the tune of nearly 60 percent of all procedures in the United States, according to a 2014 study.

The device embeds a sensor which has a tri-axial accelerometer, a gyroscope, memory, and a Bluetooth transponder, inside of a silicone rubber wristband. Similar to the design of a Fitbit, the device will relay pitch information to a database accessed by the coaching staff and pitcher, which will give them an accurate representation of how many high-velocity pitches (represented as 80 percent of the pitcher’s agreed-upon maximum velocity) have been thrown by each pitcher in practices, warming-up, and during a game. With this information, coaches will be able to scale down a pitcher’s workload, which will cut down on injury.

While the team was able to create the mold for the band, create a sample band, and do most of the coding, the biggest additional hiccup they’ve had is with the bluetooth sensor in the device:

“So there’s a Python library for MetaWear sensors, which are the type of sensors we’re using, and we’re having trouble downloading the library,” Hill said. “We’ve gone around and we’ve coded everything we needed to in Python, but we need the MetaWear python package to download in order to connect the device to a computer.”

Both Hill and Clum-Russell, who were the two coding the device, said that one of the major factors has been compatibility issues with their Apple laptops, since their device requires Windows 10 to run. But even when they tried using Bootcamp on their Mac’s, which allows a Mac to run Windows 10, Clum-Russell nearly destroyed her computer:

“I ended up calling Apple for five hours, because it gave my laptop a virus, and I couldn’t get out of it, and it ended up shutting down my laptop and it wouldn’t turn back on.”

The team said that they’ve reached out to the UConn computer science and engineering department, and will be speaking with one of the faculty members soon to figure out a solution, but once the Bluetooth coding is figured out and running, the team and Connecticut Children’s intend to test the device with multiple youth pitchers before Demonstration Day:

“Our faculty advisor also works at Connecticut Children’s, so he has access to participants that can test this from multiple age groups,” Gutowski said. “We think that after we get this coding issue out of the way, we’ll have some good data between that and testing the device on ourselves.”

In the end, reflecting back on the past year, the group agreed that Senior Design was great practice for their futures as professional engineers:

“Chris, Tim and I were in a group last year for Junior Design, but doing this Senior Design project has taught me even more about working in a group than that one, because that was only half a year and this was a full year,” Hill said. “This is a true long-term project, so there’s a lot to be done, with work being split up by expertise, so this is truly great practice for when we’re in the real world and working on a big project in a job-setting.”