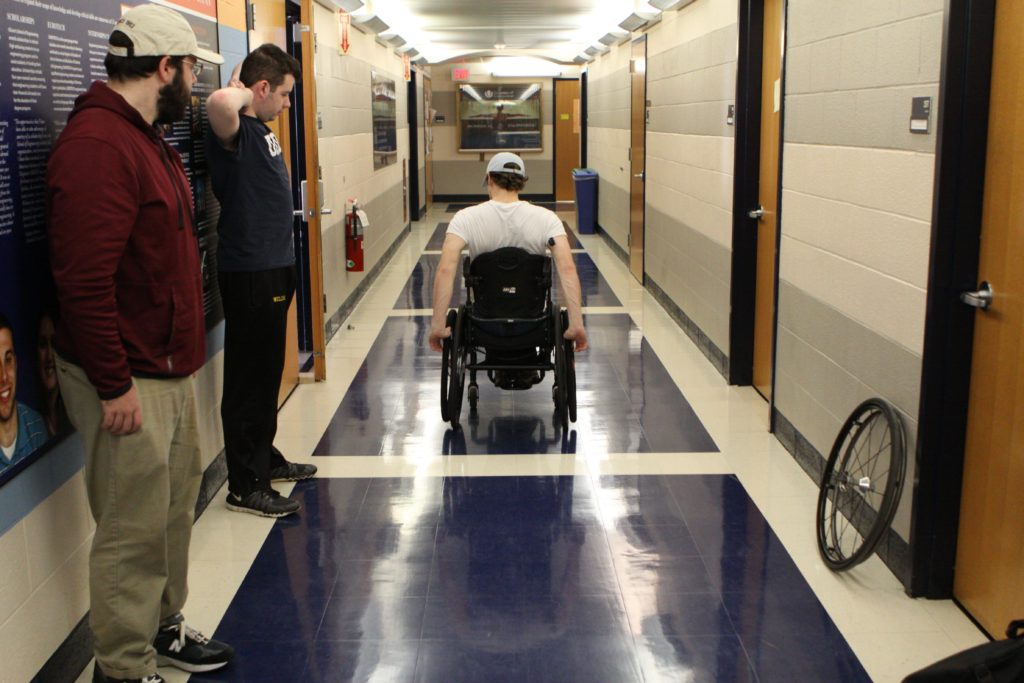 One of the biggest debates in the world of wheelchair propulsion is push vs. pull, and one Senior Design team is looking to take this question to the next level of testing.

Senior biomedical engineering majors Mitchell DuBuc, James Welch, and Alex Draper, under the advisement of Professor Krystyna Gielo-Perczak, are putting a new type of wheelchair wheel to the test. Rowheels and Numotion, two companies which design wheelchair wheels with a pull system, have passed laboratory tests and applications, but this Senior Design team is testing these wheels in real-life applications.

DuBuc, who is in a wheelchair himself, got interested in the project through personal experience.

“I got interested in it because I’m in a wheelchair and that lends itself to me being interested in ambulatory advancements that come out,” DuBuc said. “I was just talking with Dr. Gielo-Perczak one day about push vs. pull, because that’s a big interest of hers, and how in what aspect the human body is stronger. I had learned about these wheels a while back, very briefly, so I looked them up again and found out that they were still pushing forward with the wheels, so I brought it to her attention, and we went from there.”

Draper says the reason that wheelchair users experience pain and wear-and-tear is because the traditional wheelchair wheel is designed physiologically backward:

“For someone who’s not in a wheelchair, it’s like someone would rotate your hips 180 degrees and then someone tells you to walk forward while your legs are backward,” Draper said.

A pulling model, on the other hand, is supposed to spread out the force to bigger muscles in the arms, such as the biceps. And through their tests, they hope to see if this holds true in real-life application.

Specifically, they will be running a series of tests on other wheelchair-bound individuals, with varying levels of disability, to see whether the push or pull system works the best. They will do this by tracking muscle activity using a series of sensors that will measure the activity level of specific muscles in the arms and back. The sensors will show which muscles are activated at any given time, and the team will look at which wheels activate which muscles, Draper said. 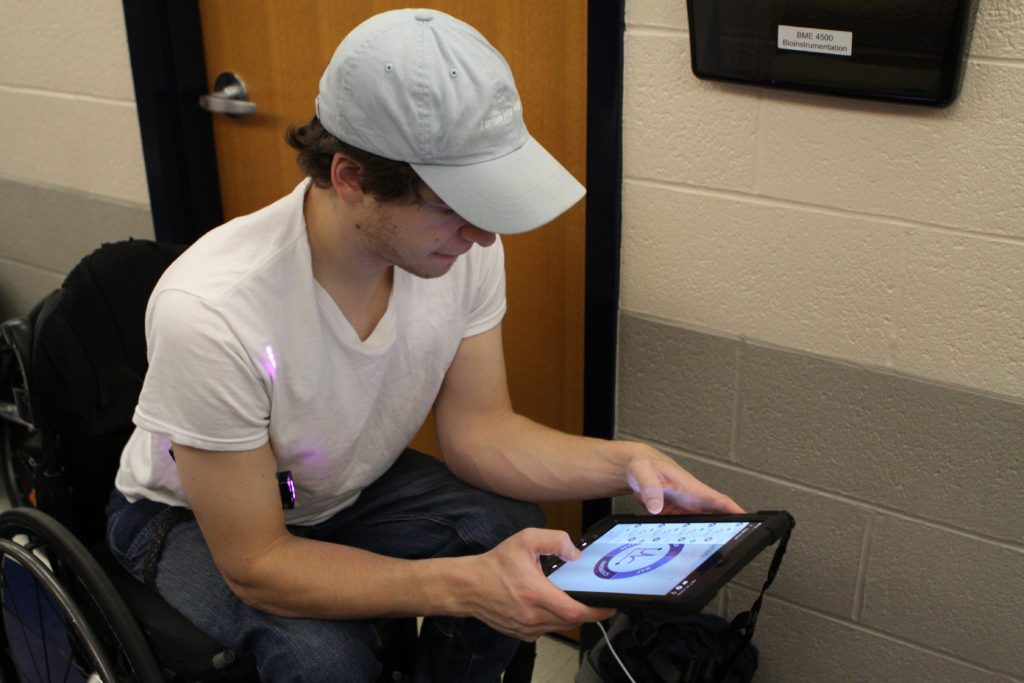 In order to perform testing on other individuals, the team needs approval from the UConn Institutional Review Board (IRB), which regulates any testing done on humans. They are hoping to have their application finished and approved by mid-December, Draper said, who cited the IRB application as one of the most stressful parts.

DuBuc echoed this as a struggle and added that finding the participants may be another issue. He has already reached out to his support group back home, and they hope to utilize the IRB and UConn’s Center for Students with Disabilities to get the word out, but they’re still worried about the number of people they’ll be able to get.

After finding the participants, they will all have to work diligently to conduct the experiments, which will be the main project for the spring semester. They want each participant to come in two separate times to test out the different wheels so that they can get more accurate data.

But even with the obstacles, all of the team members have big hopes for what this project could do outside of the classroom setting.

“To me, the main goal is to introduce this to be used more,” said DuBuc, “and a job would be good too.”

Draper and Welch quickly agreed on the job part. But Draper still hopes it will help the company and the future of this technology.

“First, opening up the door for future research on this topic, it is something that is a relatively new technology that people aren’t familiar with and it’s not outspoken in the medical community,” said Draper. “The second would be an actual change in physical therapy diagnosis. If this project affects when they offer these wheels, that would mean the world to us.”

This article is part of a multi-part series on engineering students, and their journey through senior design. Part two of this team’s journey will come out in early April 2019.