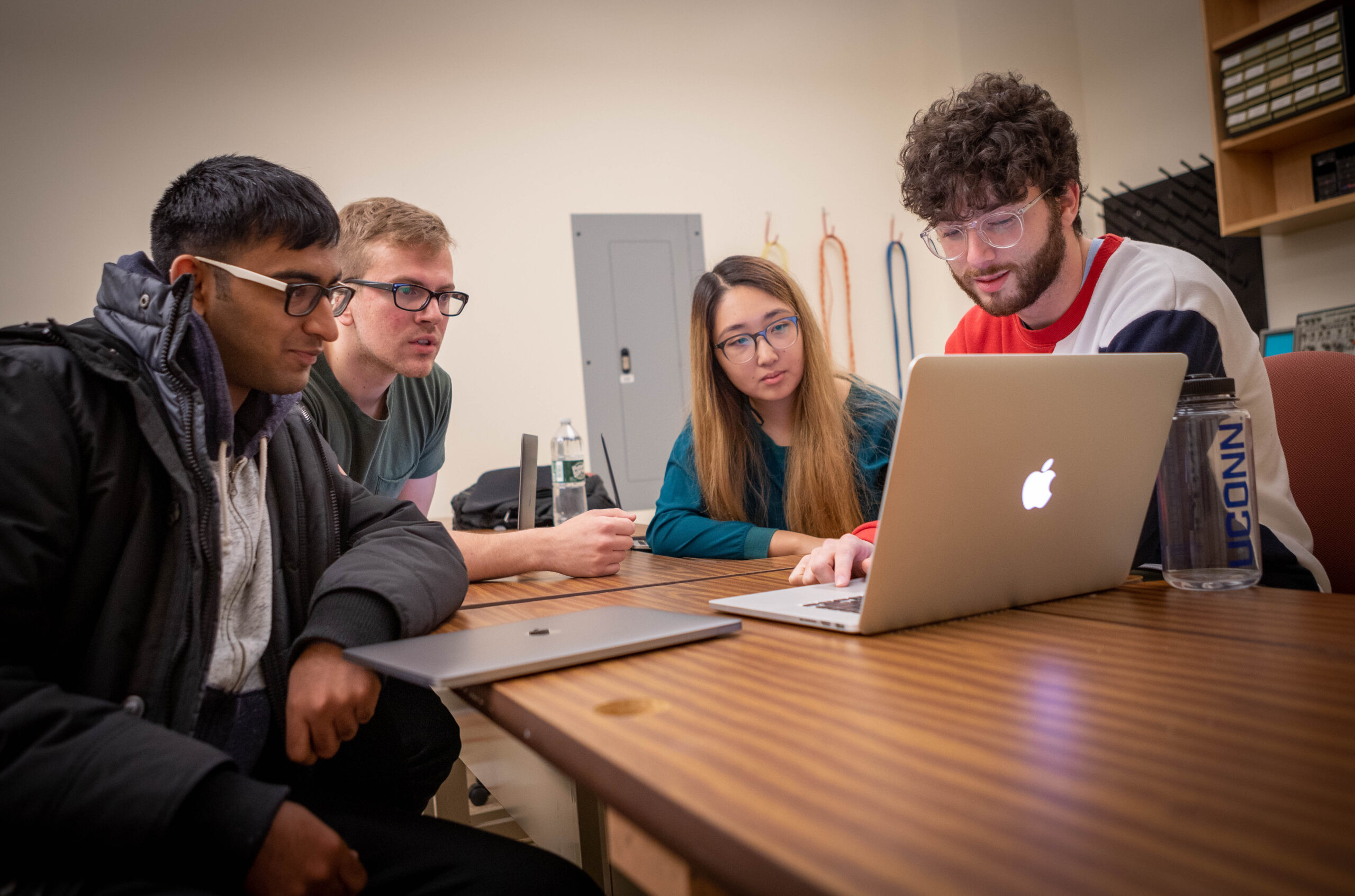 From left to right: Solomon Poulose, Mark Adanti, Frances Yu, and Samson Weiner all review a data set as part of their heat-mapping project with Cigna. (Eli Freund/UConn Photo)

According to data from the U.S. Center for Disease Control, in 1999, nearly 8,000 people of all ages died from opioid overdoses. Eighteen years later, that number had risen 600 percent to 48,000.

While most news stories highlight teenagers and twenty-somethings with lives cut way too short from drug overdoses, further data from the CDC shows a trend of the greatest increase coming from adults aged 55-64 years-old.

That’s why taking a myopic view of the opioid crisis, instead of digging in and using all available data would paint an incomplete picture for the companies, governments and individuals working to help.

A group of four senior University of Connecticut computer science majors feel the same way, which is why they are working on a Senior Design project with program sponsor Cigna to use data and analytics to address the opioid crisis head on.

One of those students, Samson Weiner, says that by importing data from various governmental sources, and using a machine-learning algorithm they’re developing, they can create a heat map which could help Cigna locate areas of overdose concern.

“Part of computer science is data science and data analysis, which is really the powerhouse behind this project,” Weiner said. “The idea is that you have massive amounts of information about people and their backgrounds, so how can you use that data to predict where the opioid epidemic will hit the hardest? If you have that data, then you can go there and help these people.”

The data, which is being actively filtered into their machine-learning algorithm from multiple sources, including demographic and geographic data available from the CDC, gives the group the chance to create a constantly evolving system, letting Cigna see demographical shifts over time.

Frances Yu, another member of the group, said that the creative freedom they’ve gotten from Cigna has allowed them to be innovative with their design of the system.

“From the beginning, Cigna really wanted to focus our efforts on data mining an epidemic,” Yu said. “Since the opioid crisis is an epidemic, and one that effects many Americans today, we decided to put our focus into that.”

But, the Senior Design process is more than just working on a deliverable project for a client. All of the students working on projects get a taste of long-term group dynamics, deadlines, reporting and communication.

Solomon Poulose, who went into the project not knowing any of his teammates, said that even though the team wasn’t familiar with each other, they were all driven by the novelty of the project.

“It was a very cool project, honestly. Even though none of us knew each other, we were pretty like-minded and that’s really helped us motivate ourselves to do it,” Poulose said.

Overall, the team says that they are taking each challenge in stride and will be busy during the winter break and spring semester working on their first phase of preliminary data analysis and creating a programmatic pipeline and feeding in data to create this graphical analysis.

In addition to that, the team plans on creating some educational materials that will go along with this heat map, with intentions of creating a single repository for all data—whether that’s numerical or factual in nature.

Most importantly, the fourth team member, Mark Adanti, said that the team is just excited to play a part in a major humanitarian crisis.

“We’re happy we have a project that could have a real impact, especially in a state like Connecticut, where we’ve seen a strong focus,” Adanti said.

This article is part of a multi-part series on engineering students, and their journey through senior design. Part two of this team’s journey will come out in April 2020.