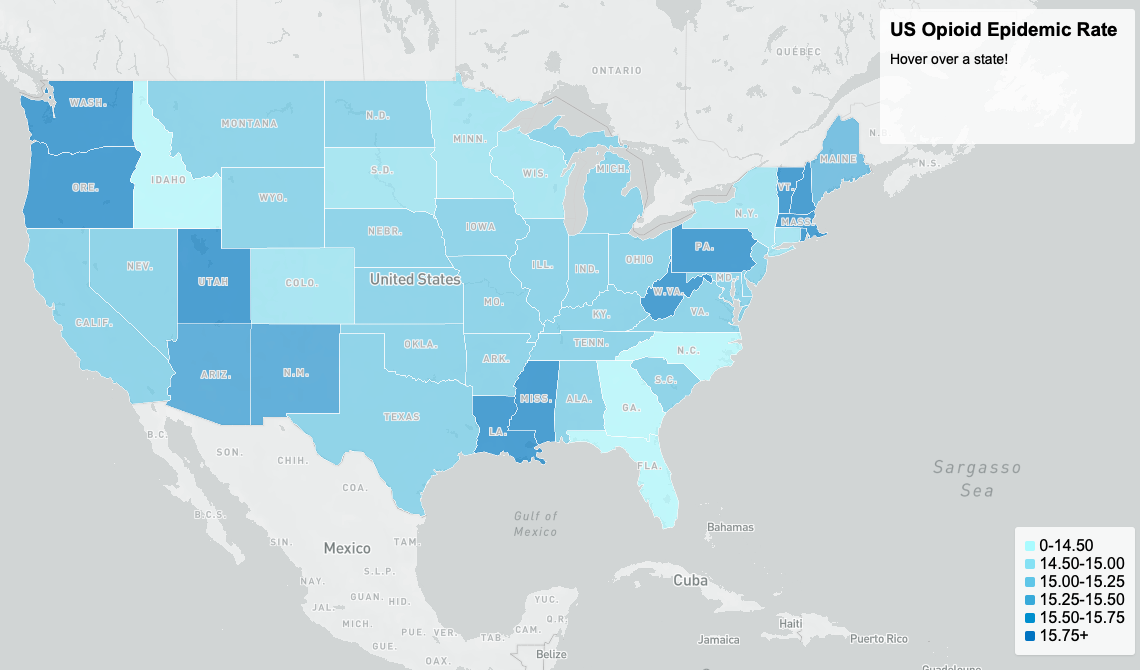 A demo of the opioid map produced by the Senior Design team.

With the in-person Senior Design Demonstration Day cancelled, due to the COVID-19 restrictions, and with every student sent home, Senior Design groups faced obstacles in completing their project.

But with obstacles comes opportunity and challenge, especially for engineering students.

One of those Senior Design groups, consisting of computer science students Mark Adanti, Solomon Poulose, Frances Yu, and Samson Weiner, is working on mapping the opioid crisis for Cigna.

Luckily for them, Adanti said, the nature of their project allowed them to be successful while separate from each other.

“Although we won’t be able to present our results at Gampel this year, we’re lucky that our workflow was only dependent on us having computers. We’re still able to build what we envisioned from the beginning,” Adanti said.

According to data from the U.S. Center for Disease Control nearly 8,000 people of all ages died from opioid overdoses in 1999. Eighteen years later, that number had risen 600 percent to 48,000.

While most news stories highlight teenagers and twenty-somethings with lives cut short from drug overdoses, further data from the CDC shows a trend of the greatest increase in opioid deaths coming from adults aged 55-64 years-old.

The team’s Senior Design project, with program sponsor Cigna, is using data and analytics to study the opioid crisis.

The team is actively filtering their machine-learning algorithm from multiple sources, including demographic and geographic data available from the CDC. This gives the group the chance to create a constantly evolving system, identifying demographic shifts over time.

Over the last few months, the team has been working to obtain data from multiple sources, but Weiner said that their biggest impediment early on has become their biggest asset.

“Because of the early roadblocks in getting data, we resorted to a number of other strategies deviating from our first county-wide model, including a statewide model where more information is available to looking at county data from more than 15 years ago. Eventually though, we were given clearance by the CDC to acquire sensitive data, which really helped us.”

Now that the team has the data that it needs, they have moved swiftly, developing a layout for their website, building on their model, and creating a heatmap at the state and county levels that can show the predicted value for each location.

But for this team, as well as many other teams, the emotions behind missing Demonstration Day have been palpable, with a definitive feeling of loss.

“An important aspect of our college experience, the semester that culminates four years of hard work, has lost an aspect that was very important to us, especially not being able to walk for graduation,” Weiner said.

Despite all that, Poulose sees the overall experience as an important part his team’s development as engineers.

“The experience was extremely worthwhile for all of us. We wouldn’t trade it for anything else in the world,” Poulose said. “Last semester we may have been a little worried about how far we could go, but in this moment, I must say we have gone further than we have ever thought imaginable.”

And in the end, Yu feels that the final product that they’re delivering to Cigna supersedes any disappointment from missing Demonstration Day.

“The vision of our project is to be able to use technology to predict the spread of epidemics such as the opioid crisis, in order to identify areas that are in need of resources,” Yu said. “We hope that our exploration of how machine learning can be used to build predictive models will give insight to industry leaders.”