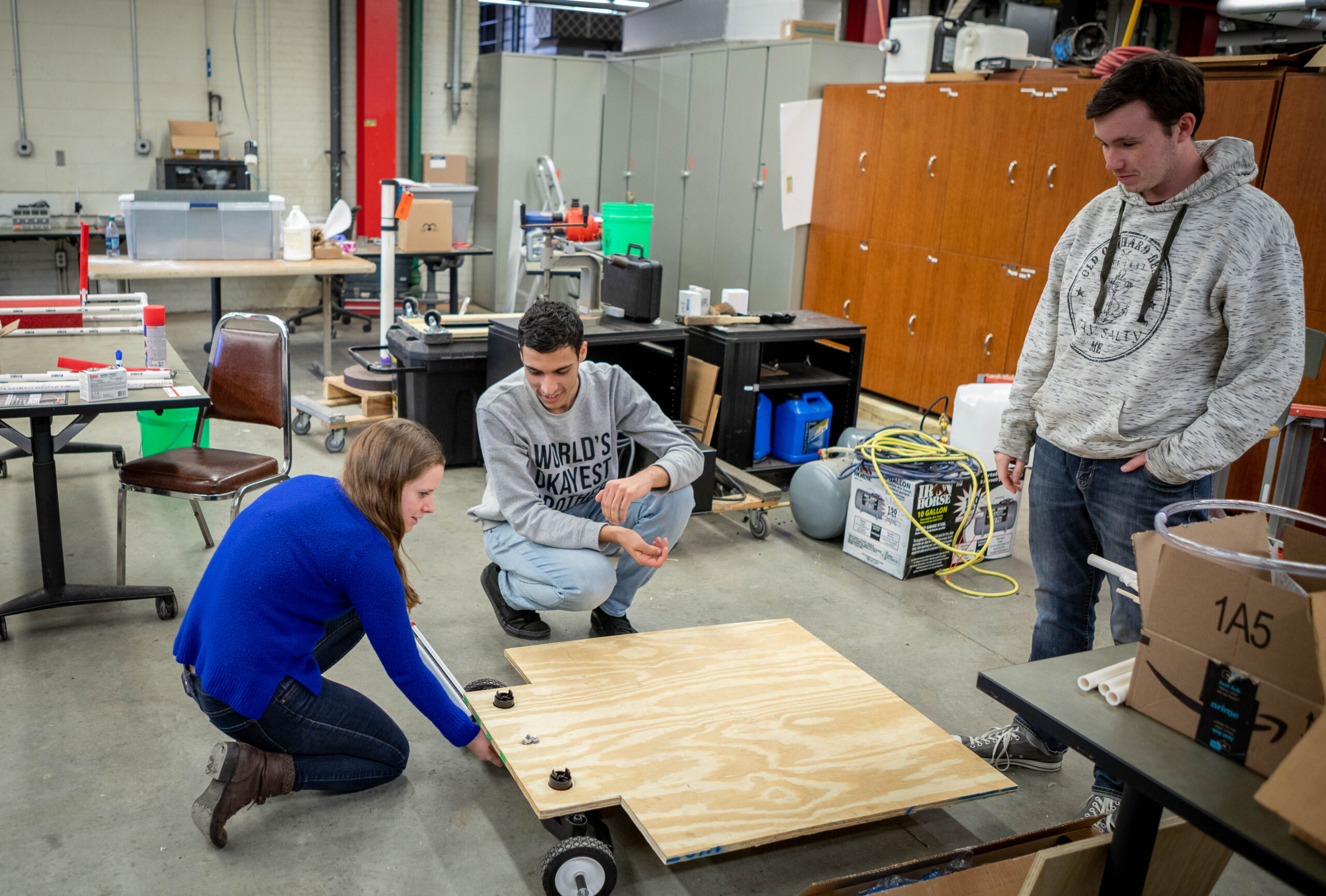 From Left to Right: Julia Oppenheimer, Marwan Ghellai and Cody Corey work on their platform in the machine shop in Castleman Building. (Eli Freund/UConn Photo)

When ThayerMahan came to a group of senior University of Connecticut mechanical engineering students with a challenging real-world problem, those students responded with a unique and cutting-edge solution.

ThayerMahan  a Groton-based company, working with government and industry partners to design, manufacture and operate systems that collect acoustic and electronic information on the world’s oceans. ThayerMahan challenged the students to launch and land an aerial vehicle from a moving ocean surveillance platform.

The of student group consists of  Julia Oppenheimer, Cody Corey, and Marwan Ghellai. According to Oppenheimer, one of ThayerMahan’s major problems was the possibility of losing the drones, which are prohibitively expensive. Traditionally this has been done by pneumatically launching then not recovering the drone.

“ThayerMahan wants to begin using drones, also called unmanned aerial vehicles (UAVs), to collect data from the ocean. However, there’s no way to retrieve these UAVs once they’re too far out in the ocean,” Oppenheimer said. “The UAVs usually crash or are lost, which can cost between $10,000-$80,000 every time.”

To solve this, Oppenheimer’s team is collaborating with another senior design team to build a platform that could be placed on top of ThayerMahan’s fleet of unmanned surface vehicles. This platform would autonomously summon and fully-charge the drone once it’s done collecting data.

Oppenheimer remarked that because of the potential costs of a losing a drone, ThayerMahan doesn’t want to begin testing any of this in the water just yet. This is why her team is designing and testing the platform on land first, before it’s deployed on a USV.

Oppenheimer’s team is dedicated to building the actual platform, while the other team is focused on programming the drone to connect to the platform later on. The first step in the journey is for the team to finish their platform prototype during the break and then work on testing.

“Hopefully, if all goes well, testing will start in early February as we plan on having this prototype finished during winter intersession,” Ghellai said. “However, the other team can start testing other things before we join together for the major tests.”

Oppenheimer said the key for both teams will be for the drone to land on a stable platform. Then the team will transition to a moving platform to simulate the real-life conditions on a rough ocean environment.

While things have gone mostly smooth so far, the group is learning the skills that go into working in a team, which can cause some growing pains. “Initially, it was weird syncing up as a group because we didn’t know each other,” Ghellai said. “Also, we’re all involved in other extracurricular activities  outside of this. I’m in Formula Society of Automotive Engineers, Cody is in Rocketry Club, and Julia is in Band. Therefore, just finding good times to meet was  hard at first. However, we’ve recently gotten better at working that out.”

One of the other growing pains was making small, collective group decisions, which caused some frustration. “During the first couple of weeks, when we started designing, we couldn’t pick which drive system we wanted for the platform. After going back and forth, I was like, ‘Let’s just pick something for gosh sake,’” Corey said.

Regardless of these roadblocks, the group is excited to continue the work into the spring and produce something useable for a local company. “This project has always been my first choice and I can’t imagine doing a project which was mainly analytical. I just really wanted to build something,” Corey said. “I can’t wait to see the final product.”

This article is part of a multi-part series on engineering students and their journey through senior design. Part two of this team’s journey will come out in April 2020.