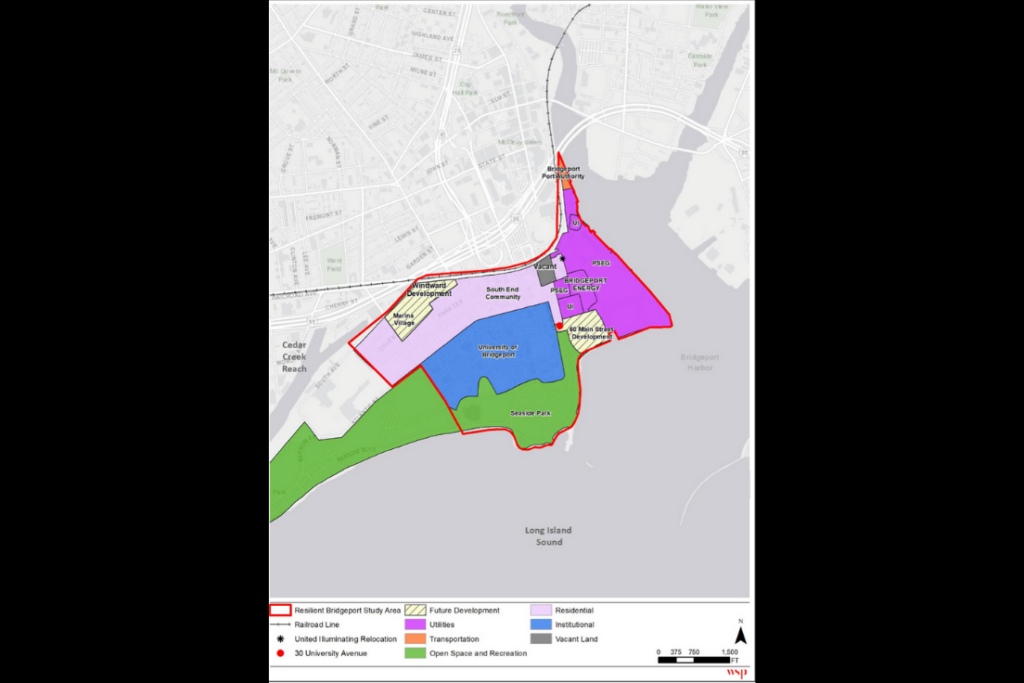 In the quest to hold back the devastating flood waters in southern Bridgeport, four University of Connecticut Civil and Environmental Engineering students are rounding the corner on creating a flood wall design that could save residents and businesses that have been battered by strong storms in the past.

The flood wall, part of a larger project of flood mitigation called Resilient Bridgeport, is being managed by professional services firm WSP, in conjunction with CEE students Zachary Sedor, Caitlin Jenkins, Andrew Mora, and Kelvin Chung. The creation of a flood wall would not only protect the people in the area but would also alleviate property owners of high flood insurance costs they’re required to pay.

The students have been working on an alternative design for WSP, which, over the course of the last seven months has caused some spurts and fits as they figure out the right structure, materials and calculations for the environment.

“One of the biggest things we struggled with is the area the wall has to cover,” said Chung. “This is a massive flood wall that spans multiple blocks. There’s a lot of different materials we have to account for and we have to calculate all the possible forces that nature will bring to it.”

Jenkins was the one that was focused on the materials and how it overlaps with the structural aspects of the wall. She said that a lot of the calculations she needed hadn’t been taught in the classroom and she had to access an unfamiliar place for some students—the library.

“I’ve taken several design classes during my four years here, but nothing prepared me for the specific calculations I had to do,” Jenkins said. “I actually had to go to the library, take out a foundations textbook, and find the calculations. Luckily I found them, which was a huge breakthrough for my part of the project.”

On another piece of the project, Mora was responsible for was the drainage of the water back into the ocean, which had several road blocks due to the aging infrastructure in that end of Bridgeport.

“Bridgeport’s sewer system is actually combined with its storm system, which causes a ton of problems during a large rain event,” Mora said. “It’s an old way of doing things that doesn’t work with the severity of storms we have now, so I had to suggest separating the two systems.”

Another unexpected piece of the project came from the way that force calculations had to be done, which are regulated by the U.S. Army Corps of Engineers, according to Sedor.

“In addition to calculating for large waves and other environmental factors, we had to calculate the impact that a barge crashing into the wall would make,” Sedor said. “We had to study the manual on retaining and flood walls that the U.S. Army Corps of Engineers put out.”

With Senior Design Demonstration Day around the corner, the team has a mixture of excitement and nervous energy as they reach the end of their journey.

Sedor has a slightly different view, as he still has another semester left, but he’s grateful of the experience he had.

“It’s not going to be my last semester at UConn, and I still have a little bit more school to look forward to. It’s going to be nice to get it done though. I enjoyed working with WSP, I learned a lot from them.”

Senior Design Demonstration Day will be held in Gampel Pavillion on April 29, from 1-4 p.m. For more information on the Senior Design program, please click here.