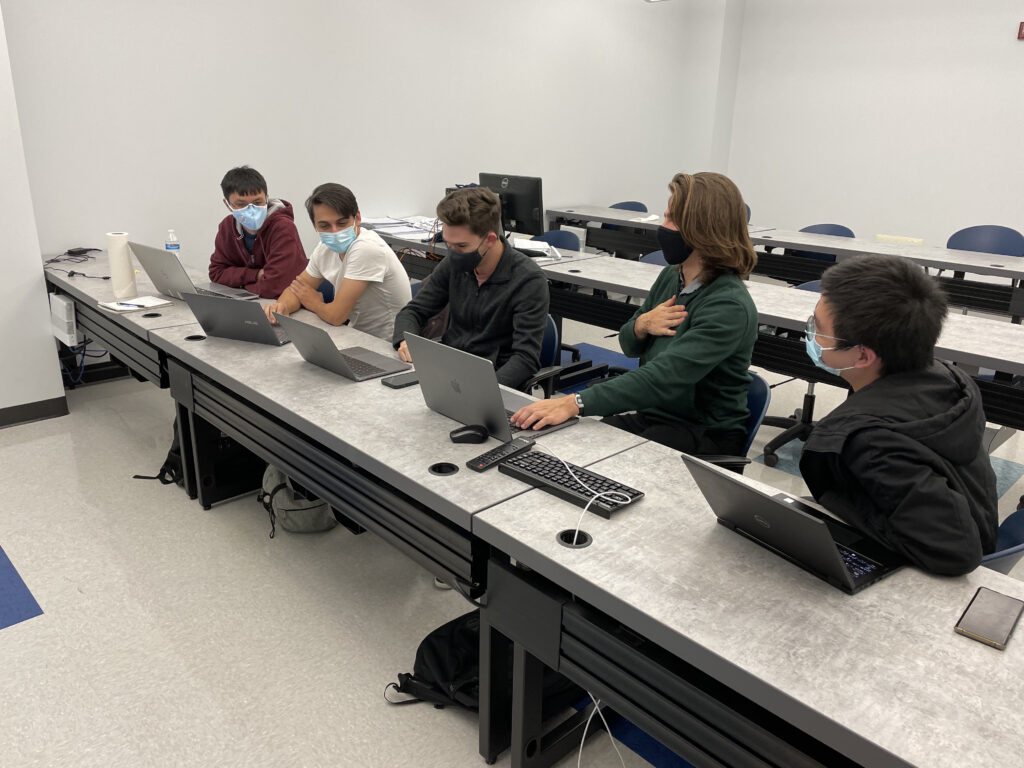 The team discusses their project during a meeting. (Eli Freund/UConn Photo)

Safety is paramount on every college campus across the country, and with smartphones becoming the most important tool for students, five University of Connecticut Computer Science and Engineering students have been working with security company ADT to apply their current technology to the higher education market.

The five seniors involved in the project are Tristen Lawrence, Brendan Henriques, Alex Le, Zhongqi Luo, and Anas Rajeh. While the students aren’t instituting the whole system, they are working on the front-facing interface that students, faculty, and staff would see when they’re submitting an incident.

The final product is a front-end solution for any university that allows a student to indicate an incident in progress, allowing for a dispatcher to send the necessary details to first responders. The proposed technology integrates with ADT’s emergency button app called ‘SoSecure by ADT,” which is a discrete app allowing someone to report a crime happening through chat, a slider, or a video chat.

According to the SoSecure by ADT website, the app is a solution for people that need to contact authorities, but in situations that require discretion. The app uses tracking technology, and contacts family and close contacts in case of emergency or allows you to send alerts hands-free using a secret phrase or voice command.

During the early part of the school year, the team had also intended to integrate a drone feature that would be programmed to fly to the geolocation, but that had to be cut as their deadline kept creeping closer.

“Some drone stuff was cut out for this project, because there were a good amount of things we had to figure out to get a drone on campus,” Henriques said. “A large hurdle we had to overcome is just getting ADT’s systems working on our machines. We had to get it working on both Windows and Mac. That easily took away about three months of productivity time.”

The other largest portion of their project they had hurdles with was full-stack development, both front-end and back-end, which is not part of the traditional curriculum.

“Once we got an understanding of the languages we would need to program this, everything got a lot easier,” Rajeh said. “The backend wasn’t intuitive in the beginning. I had to learn everything. As I worked my way through it, I started to slowly understand Java and Spring Boot.”

Now that they are nearly done with the project, the team reflected back to the beginning of the year and thought about what could have been with this project if everything went without a hitch.

“The largest takeaway is that everything we present on Senior Design Day is a product that we finished despite adversity,” Henriques said. “There was a point about two months ago that we hit a low point and weren’t sure how this was going to turn out. The fact that we have something to show is a huge thing for us.”

Senior Design Demonstration Day will be held in Gampel Pavillion on April 29, from 1-4 p.m. For more information on the Senior Design program, please click here.