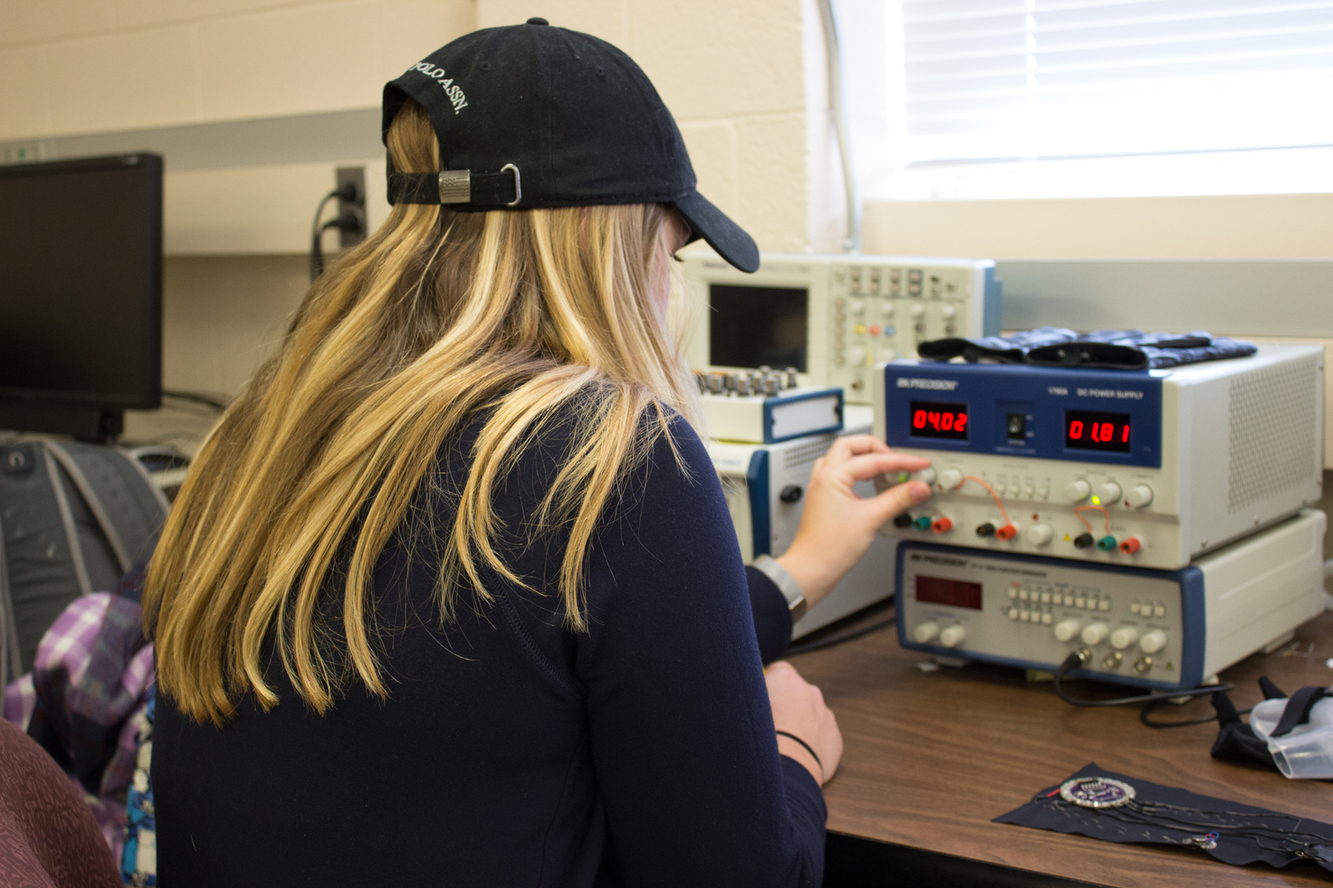 This article is part of a multi-part series on engineering students, and their journey through senior design. Click here to read part 1 of this article series.

In a perfect world, the team of four would be running trials with their cerebral palsy rehabilitation device on multiple CP patients, and all their equipment would be running perfectly. Unfortunately, that isn’t the case, according to Perry:

“After a long process, the Institutional Review Board finally approved our human trials, allowing us to get some participants,” Perry said. “Unfortunately, due to time constraints, and our inability to compensate participants, we were only able to enroll one CP patient in our trials.”

Even though the stars haven’t aligned completely, getting that one patient was a bright spot and a boon for the team, because it has allowed them to get real-time results from an actual CP patient. While the initial responses were mixed, Morgan said that they were a great start for the team:

“We have done extensive analysis using root mean square functions and we have come up with inconsistent data, showing both positive and negative results for each muscle/action performed,” Morgan said. “We’re looking forward to the last week of testing and adjusting some parameters for analyzing the data, to see if we can get a more positive result. But we’re still really excited that we’ve been able to even sort through the data enough to see results, and it is a great stride in our design process.”

And if they don’t get a complete picture in the next round of trials, Morgan said that the group is excited about the future of the treatment:

“Even if we’re not getting completely positive data we’re still hopeful that someday our project, with more time, could be very successful in treatment.”

In the United States, there are nearly 800,000 children and adults that manifest one or more symptoms of Cerebral Palsy. According to the Centers for Disease Control and Prevention, 10,000 new-born babies will develop Cerebral Palsy every year. One of the biggest symptoms is loss of motor function, taking away the ability to walk with ease and creating difficulty in feeding. There have been several advancements in devices that aid individuals with Cerebral Palsy, but not enough devices that rehabilitate the patient.

The four students involved in the project, are working on a brace, which would go on the hand and wrist of a Cerebral Palsy patient, and would use vibration therapy to treat and strengthen the muscles in the hand. Their project is being advised by BME Professor Krystyna Gielo-Perczak.

More specifically, their device uses localized vibrational stimuli, to target four of the muscles in the right wrist, which will hopefully lead to more strength and control. The device targets one of the biggest types of Cerebral Palsy, Spastic, which results in involuntary movements, stiffness, and mobility impairments. Patients would use this for less than 20 minutes a day, three days a week, for a few months at a time.

Since their early success in the beginning of the spring semester, the team has also run into some other roadblocks, including, interestingly enough, sewing:

“This project required some sewing on the glove, and I’ve only sewn a couple of times in my life,” Bradley said. “I’m a huge perfectionist, and while I was making this glove, I wanted it to look awesome, but going into the sewing process, with my lack of experience, I should have lowered my expectations.”

Bradley said that they even had trouble finding a sewing machine to use, but eventually found one in the Peter J. Werth Residence Tower, which was a stroke of good luck.

Perry also had luck on her side when she was creating the plastic cast for the device. The cast, which holds the glove in place, took specialized materials and skill, which were both available at the prosthetics clinic she volunteers for:

“I volunteer at a prosthetics clinic, so I had them help me out and they let me use their equipment, which was a lucky break for us,” Perry said. “I had to cast my own arm in plaster, wait for that to dry, then I took a sheet of Duraflex, put it in the oven, and then I had to vacuum seal it around my plastered arm, praying I didn’t burn myself.” 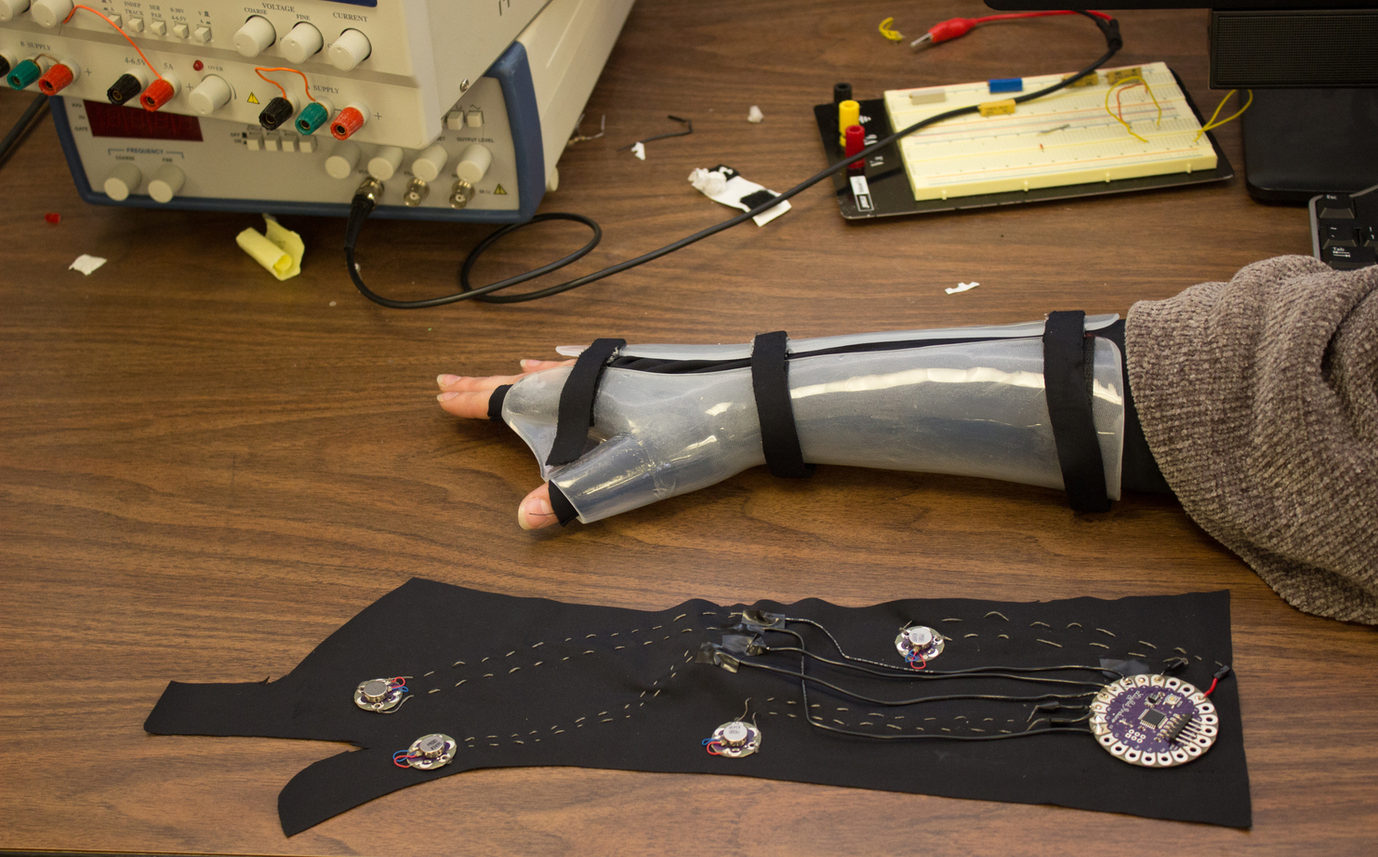 This development allowed them to complete their device, and be ready in time before the first human trials in early April.

Asked whether the team will be 100 percent ready for Senior Design Demonstration Day, Morgan commented that even though the four of them consider themselves perfectionists, the time restraints put upon them, combined with the myriad of other work senior engineering students have to do, makes this project a tough one to be 100 percent perfect on:

“I think we all want this project to be perfect, but obviously time is fighting against us. But, I think very few teams will be 100% done–that’s just the nature of Senior Design.”

DaSilva echoed that comment, and explained that an important project like this takes patience and a strong focus on priorities:

“We’ve just realized that a great project doesn’t come easily,” DaSilva said. “There’s always going to be one thing that you need to fix, or an additional data point that you need to gather, and you just don’t have the time for it, so it’s important to just focus on the big picture”

Perry, Morgan, DaSilva, and Bradley’s final results will be presented on Senior Design Day, April 27, from 1-4 p.m. in Gampel Pavillion. To attend the event, please RSVP by clicking this link.