Shor and Alpay Appointed Associate Deans For School of Engineering 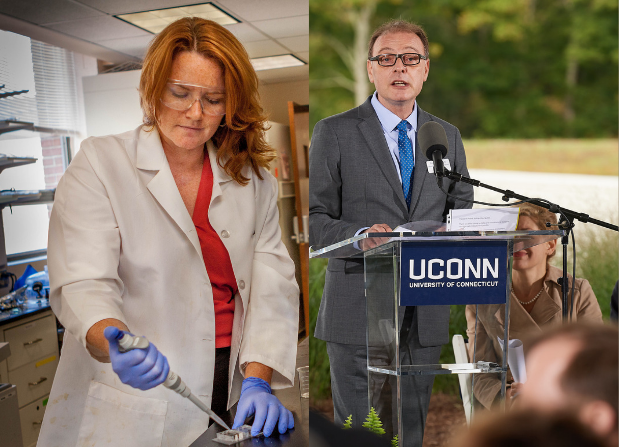 The UConn School of Engineering is proud to announce the appointment of Dr. Leslie Shor to the position of Associate Dean for Graduate Education and Research and the creation of a new position—Associate Dean for Research and Industrial Partnerships—which will be filled by Dr. Pamir Alpay.  In addition to this new role, Dr. Alpay will continue as the Executive Director of UConn Tech Park, reporting to Vice President for Research Radenka Maric. The dual role will allow Alpay to effectively lead engineering centers and initiatives in Tech Park.

“We are thrilled to have someone with Dr. Shor and Dr. Alpay’s experience taking the lead on our research development and industry relations. With their passion, strong backgrounds, and innovative thinking, I am excited for the future of our School,” Dean Kazem Kazerounian said.

Shor is an associate professor in the Chemical and Biomolecular Engineering Department, where she has served as a leader and an accomplished researcher since 2009. She also has a joint appointment as a graduate faculty member in the Environmental Engineering program and is an affiliated faculty in the Institute of Materials Science.  Prior to her tenure at UConn, she held various appointments at Vanderbilt University and received her Ph.D. from Rutgers University in 2002.

Since arriving at UConn, Shor has secured over $5 million in research funding from the National Science Foundation, the Department of Defense, the Bill & Melinda Gates Foundation, and several others. She has advised over 50 undergraduate and graduate students at UConn. Her research is in the development of engineered microbial habitats and the fate and transport of hydrophobic organic contaminants. Because of her leadership and academic strength, Shor was named a Dupont Young Professor, has been a finalist for a Connecticut Women of Innovation award, and has been an invited speaker for the National Academy of Engineering, Frontiers of Engineering Education Symposium. She has nearly 100 peer-reviewed journal publications and conference proceedings.

Alpay is the Executive Director of UConn Tech Park, leading the University’s efforts to increase strategic partnerships with businesses in a state-of-the-art research and development facility. He is also the General Electric Professor in Advanced Manufacturing in the Department of Materials Science and Engineering. Alpay joined UConn’s MSE department in 2001 and served as its program director and subsequently as its department head from 2011 to 2017. He received his Ph.D. in 1999 from the University of Maryland.

He is an elected member of the Connecticut Academy of Science and Engineering (CASE) and a Fellow of the American Physical Society (APS) and the American Ceramic Society. He is the recipient of several awards including the NSF CAREER grant in 2001, the UConn School of Engineering Outstanding Junior Faculty Award in 2004, the UConn School of Engineering Outstanding Faculty Advisor Award in 2013 and the AAUP Excellence in Career Research and Creativity Award in 2018. Alpay has over 200 peer-reviewed journal publications and conference proceedings, four invited book chapters and a book on functionally graded ferroelectrics.

“Dr. Alpay’s new leadership role within the School of Engineering allows him to continue leading efforts to establish new industry partnerships and leverage the unparalleled capabilities available at Tech Park,” Dr. Radenka Maric, Vice President for Research at UConn and UConn Health said. “Having worked closely with industry partners throughout his career, I am confident that Dr. Alpay will continue to contribute to the University’s mission to support research, education, and economic development in the state.”

For more information on the School of Engineering’s leadership team, please visit:  https://www.engr.uconn.edu/about/leadership/.