Approximately 1.5 million people in the United States were diagnosed with cancer in 2010, including 21,000 of Connecticut’s own citizens. Cancer is the second most common cause of death in the U.S., accounting for one in four deaths. Although these statistics may sound grim at first, there is a silver lining: the survival rate of cancer is now at 68%, which is a dramatic increase from the 50% survival rate of the late 1970’s. One of the main factors aiding the survival rate is the vast advancements that have been made in the field of chemotherapy drugs. Although chemotherapy has become the most common cancer treatment, the costs and side effects typically associated with chemotherapy are often a deterrent for patients. If these treatments could be less expensive and taxing on their bodies, patients would feel less stress, which would aid their recovery. 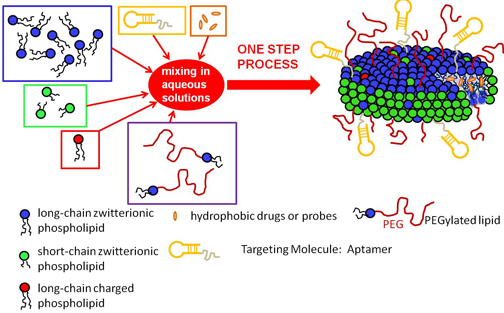 This goal is the driving force of a multidisciplinary research program involving various University of Connecticut professors and graduate assistants at the Storrs campus. The researchers plan to create a new drug complex through the use of phospholipids, poly-ethylene glycol (PEG), and aptamers. They hope to construct a new way of delivering hydrophobic drugs to the body, especially for cancer chemotherapy.

The research team, led by Mu-Ping Nieh, an associate professor of Chemical, Materials and Biomolecular Engineering (CMBE), was awarded approximately $387,000 by the National Science Foundation to conduct research that will enable them to design new self-assembled targeting nanodisc carriers that will incorporate hydrophobic (fat soluble) drugs. Dr. Nieh is partnering with Drs. Tai-Hsi Fan of Mechanical Engineering, and Yong Wang of CMBE. Dr. Fan and his research group will be responsible for simulating the formation mechanism of the carrier. Dr. Wong and his group will be in charge of the synthesis of targeting molecules (also known as aptamers) and the examination of the biological functionality of affinity nanodiscs.

The three-year study will focus on leukemia as its disease model, although Dr. Nieh and his collaborators remarked that: “Our approach is potentially useful for the treatment of most cancer diseases and it bridges fundamental understanding in the self-assembly of nanocarriers for medicines. We are planning to use this novel approach to treat breast and prostate cancer as well in the near future, to further demonstrate the broad impacts of the aptamer-functionalized nanodiscs. To do so, we only need to change the aptamer species with the remainders unchanged.”

Professor Nieh also notes that current methods of manufacturing lipid-based chemotherapy drug carriers are both complex, involving multiple steps, and time consuming, resulting in high manufacturing costs. Extrusion and sonication are the two most common methods involved when loading single-shell spheres with chemotherapy drugs. Sonication relies on high frequency vibrations to break up the natural multilayered onion-like structure of the liposomes. A drawback of this method is that the high energy needed can degrade the lipid molecule. Extrusion pressurizes the lipid solution, enabling it to pass through a series of filters with tiny pores in order to break the multi-layered lipid structure.  The drawback of extrusion is that it is a labor-intensive process and incurs high costs due to the maintenance of the filters. Lastly, the vesicles used for extrusion are favorable only toward water soluble drugs, and do not correspond well to hydrophobic counterparts.

Dr. Nieh explains that these complex methods can be simplified through a self-assembling process described in their research. Although most commercially available carriers have the structure of single spherical shells, they are mostly suitable for entrapping water soluble drugs. . With this in mind, Dr. Nieh states that “our idea is to mix two types of lipids which have different sizes of the hydrophobic regions, resulting in very uniform disk-like self-assembled aggregates. Such aggregates possess a hydrophobic core making them suitable for fat soluble drugs. Moreover, by decorating the surface of the aggregates with aptamers and polyethylene glycol, the result will be a targeting effect of the cancer cells and a reduction in the in-vivo immune response. Most importantly we can achieve the formation of such aggregates in a single step without using sonication or extrusion”

In tackling the expansive project, the researchers will assign modularized scientific questions to graduate students, and provide them an opportunity to discuss their findings in joint group meetings. The three principal investigators in this research will incorporate the study results into their engineering courses with the aim of exciting students and encouraging them to either start their own research or contribute to an existing project. Dr. Nieh and his team anticipate that the research outcome will provide new strategies for synthesizing targeting drug carriers and greatly reduce the manufacturing cost for making nanomedicine.

If Dr. Nieh’s research goes according to plan, chemotherapy drugs will become significantly more affordable to the general public, thanks to new production methods that require a single step. Fewer steps also translate into a reduction in the potential for processing errors. Finally, the newly designed targeting drug carriers promise substantially fewer side effects than current drugs, while enhancing efficacy.