Some things change, and some things stay the same.

A special group of freshman engineering students and their families gathered in the Castleman building for a reception on a rainy Saturday morning over Family Weekend. What set them apart was that they are all second-generation UConn engineers. 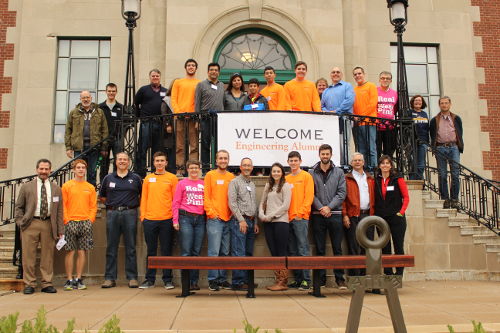 “The single most important asset that we have is our alumni,” said School of Engineering Dean Kazem Kazerounian at the reception. “One of my hopes is that we create one of the strongest possible communities of engineering alumni.”

About 30 members of UConn Engineering legacy families attended the event. The freshman received pins with the School of Engineering logo and certificates. Their parents reminisced about their own experiences at UConn and marveled at how much the school has changed.

“There are definitely a lot of memories on this campus. This building is one,” said Anisa Brown, referring to the Castleman building, one of the last engineering buildings that hasn’t been razed or remodeled in the last decade. Brown is a 1990 Materials Science and Mechanical Engineering graduate.

“It’s just unbelievable how much has changed, how much bigger it’s gotten, how nice all the new buildings are,” said Keith Boislard, a 1988 Mechanical Engineering graduate. His twin sons Adam and Jacob are freshman this year.

I’d like to say I didn’t influence their choice in enrollment too much, but I was really proud of them for getting into UConn,” said Keith.

The Ecsedy family have also made UConn a family tradition. All five of the present family members were UConn students or graduates and three, father Thomas Ecsedy and his sons Stephen and Daniel, are UConn engineers. Stephen graduated this May with degrees in Materials Science Engineering and German through the EuroTech program, where his younger brother Daniel just began his freshman year.

The attendees were interested in the growth of UConn Engineering over the past few years and the major developments in the school’s future, like the new UConn Technology Park and STEM residence building. 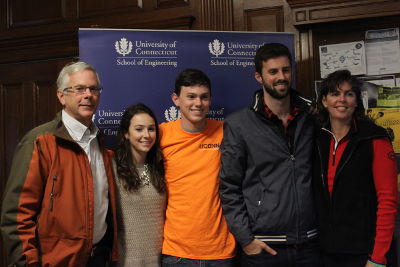 The Tech Park, the first phase of which is set to open in 2017, will bring together university students and faculty with major companies in shared research and development space.

“Pratt & Whitney, General Electric, Comcast…these companies come to Storrs not because Storrs is the center of the world, but because our students and our faculty are attracting these companies,” Kazerounian said.

The School of Engineering has been growing in recent years thanks to major initiatives from the state such as Next Generation Connecticut and BioScience CT that emphasize STEM technology and education.

Six thousand applications were received in 2015 and 675 students were accepted, the largest freshman class ever. The School of Engineering, which now numbers over 3,000 students, has a goal of enrolling 3,500 students within the next few years.

“The economic impact of these projects is going to be long term and not just for the university but for the community and the state in general,” said Kazerounian

“We measure our success in the School of Engineering with the success of our students. And being in groups like this reassures me that we’re doing well on that.”

Click the link to view more photos from the event. 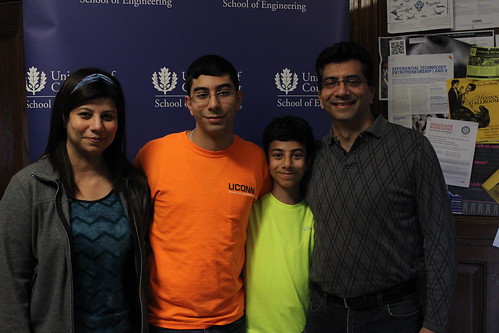