The paper, “Analysis and Improvement of Batch-Based Production Lines with Bernoulli Machines,” was also co-authored by industry partners Dr. Jorge Arinez and Dr. Guoxian Xiao from General Motors. It was one of the two awardees among 197 conference papers. In the paper, Prof. Zhang and his team developed a computationally efficient algorithm for analysis and improvement in small- and medium-volume manufacturing systems. The technique developed also provides an effective tool for production floor managers and operators in their daily operations.

Earlier this year, another paper of Prof. Liang Zhang, titled “Transient Analysis of Bernoulli Serial Lines: Performance Evaluation and System-Theoretic Properties” won the Best Paper Award of IIE Transactions Focused Issue on Design and Manufacturing in 2013 and was recognized at the 2014 IIE Annual Conference held in Montreal, Canada, from May 31 to June 3. The paper was co-authored by his former student Chuanfeng Wang from Georgia Tech and industry partners Dr. Jorge Arinez from GM and Dr. Stephan Biller from GE.

IIE Transactions is the flagship journal of the Institute of Industrial Engineers and publishes original high-quality papers on a wide range of topics of interest to industrial engineers who want to remain current with the state-of-the-art technologies. The refereed journal aims to foster the engineering community by publishing papers with a strong methodological focus motivated by real problems that impact engineering practice and research.

The state-of-the-art in haptic-assisted virtual assembly is based on a distinction between two modes of function – a free motion mode implemented with collision detection engines, and an insertion mode during which the software assists the user in the precision assembly task by providing geometric virtual constraints. The identification of the switch criteria between the two modes has been one of the open problems in virtual assembly of complex objects.

The two UConn researchers proposed a novel technique to automatically detect the geometric constraints for assembly guidance using a generic force model that applies to objects of arbitrary shape. They showed that their approach creates the attraction forces and torques towards the assembly configuration corresponding to proper alignment as well as the repulsion forces and torques in case of collisions. Their work, supported by National Science Foundation, is the first one to unify the free motion and insertion modes during virtual assembly into a single functional mode for shapes of arbitrary complexity. 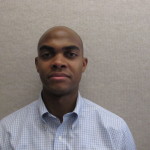 Matthew Harmon has been chosen as one of 12 recipients for a 2014 UNCF/Merck Graduate Science Research Fellowship.

Funding for the fellowship includes a stipend of $43,500 for Harmon. The remaining $10,000 of the grant is to be distributed to the department for Harmon’s use.

Harmon, a Ph.D candidate in Material Science and Engineering, is originally from Syracuse, NY and is in his fifth year at UConn. Working with Dr. Sangamesh Kumbar in the Institute for Regenerative Engineering, Harmon’s research focuses on tissue engineering scaffolding for intervertebral disc repair.