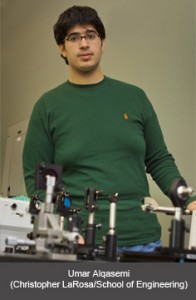 Now, as a UConn Biomedical Engineering graduate student, he is working on technology that combines photo-acoustic imaging with ultrasound imaging. “Ultrasound imaging gives us an idea of how the tissue reflects acoustic waves. Ultrasound, however, can’t directly identify tumors because they don’t reflect ultrasound waves any differently than normal tissue. Therefore, when using ultrasound, physicians can only find tumors by looking for anomalies in the anatomy,” said Alqasemi.

According to the American Cancer Society, ultrasound cannot distinguish between a cancerous growth or a benign one. In the case of ovarian cancer, the U.S. Preventive Services Task Force, a panel of primary care providers specializing in prevention and evidence-based medicine, released a statement this year not recommending yearly screening via ultrasound for women who have no genetic predisposition to it because it hasn’t been shown to reduce ovarian cancer related deaths, and causes costly and invasive surgeries in the case of false positives.

But according to Alqasemi, the addition of photo-acoustic (PA) imaging to ultrasound (US) could possibly improve tumor detection by providing doctors with information on the blood vasculature density of the tissues.

“In PA imaging, the tissue is illuminated by a pulse laser. The laser illuminates the tissue in quick pulses that are measured in nanoseconds. When the tissue absorbs the light, it starts expanding, but because the duration of the beam is so tiny, the tissue quickly compresses back to its original state before it has the time to heat; this phenomena is called photo-acoustic wave, and was discovered in the nineteenth century by A.G. Bell.  This expansion and compression creates an acoustic wave that can be measured with the same ultrasound transducer used in conventional ultrasonography. Since tumors consume energy and oxygen very quickly, they require more blood vessels and usually the vessels absorb light the most among other tissue constituents in the near infrared region from 700nm – 850nm of wavelength,” explained Alqasemi.

“We want to create a technology that lets physicians look at the vasculature density (PA) in real-time while scanning the anatomical structure of a problem area, and this is only possible by allowing real-time switching between the two modalities US/PA. We think this technology will help physicians diagnose tumors more accurately and earlier,” said Alqasemi.

When he first arrived at UConn, Alqasemi said, Dr. Zhu and her team had already made a dual US/PA device, but it was too slow to acquire images at video rate, and it took 30 minutes to switch from US to PA imaging. Furthermore, he said, teams at other universities could do US or PA imaging individually at a video rate but not together with real-time switching and co-registration.

“So, my role here was to develop a way to acquire both modalities in a video rate. I started with a field programmable gate array. It is a digital controller that allows you to map its digital structure yourself instead of special-purpose processors, where you have certain fixed digital hierarchy, inputs, and outputs. So, I made a reconfigurable processor which can handle US images, and then in a fraction of a second switch its structure completely to adapt for PA imaging. It changes the inputs and outputs, the memory maps and even the processing procedures inside. It changes its way of thinking in such a way that optimizes the best for ultrasound and the best for photo-acoustic imaging,” said Alqasemi.

Alqasemi hopes the device will be used in clinical trials at the UConn Health Center next year to help diagnose ovarian cancer and catch tumors earlier. According to the American Cancer Society, Ovarian cancer is the fifth leading cause of cancer-related deaths in women and only 30 percent of women diagnosed with ovarian cancer survive five years after the diagnosis. “We are trying to find a better solution, because that is the goal of engineering,” said Alqasemi.

A paper (on which he is the lead author, with H. Li, A. Aguirre and Q. Zhu) describing the technology, appeared on the cover of the July 2012 issue of IEEE Transactions on Ultrasonics, Ferroelectrics, and Frequency Control (Vol. 59, No. 7).