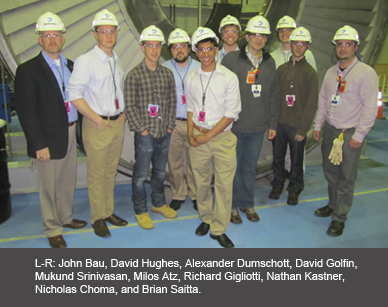 While 103 nuclear reactors operate across the U.S., providing approximately 20 percent of the nation’s power, nuclear energy has largely remained static in the U.S. for over three decades.  But President Barack Obama has expressed support for nuclear power, approving the licensing of two new power plants and championing a new small modular reactor design, offering promise for the resurgence in nuclear energy.

In Connecticut, nuclear power is supplied by the Millstone Power Station located in Waterford, CT, which is the largest electricity generation plant in New England.  In late April, seven enthusiastic undergraduate students, accompanied by John Bau, a Career Consultant embedded within the School of Engineering, enjoyed a rare opportunity to tour the Dominion Millstone Power Station.

The tour was organized by Gigliotti, who explains that unit 3 at the Millstone plant was scheduled to undergo a planned outage for maintenance that afforded a unique opportunity for visitors to view the inside works.  “In this outage, we were to remove a Low Pressure Turbine rotor from the turbine casing for its very first inspection.  The rotors are relatively new, and this inspection occurs only once every 10 years. I was the Project Engineer for the low pressure turbine rotor replacement project in 2003-04 and I remembered how impressive it was the first time I saw a low pressure turbine rotor up close.  I thought this spring’s inspection would be a good opportunity for some engineering students to experience this as well.”

He contacted the School of Engineering and issued an invitation for interested students to visit the facility.  The UConn group began their tour in the Millstone Unit 2 Control Room Simulator, a training facility for plant operators that duplicates the actual control room.  After giving an overview of the plant’s operation, Gigliotti discussed the plant’s steam cycle and pointed out the major components the group would see in the plant.  During the plant tour, the group saw the main condensers, feedwater heaters, main feedwater pumps, and the main turbine and generator.  A highlight for many of the students was the opportunity to scrutinize the impressive low pressure turbine rotor while learning about the turbine operation.

Rising junior Nick Choma, whose interests lie primarily in solar, wind and other smaller-scale energy technologies, remarked that “I expected the turbine to be filled with complicated parts and mechanisms. But it isn’t; sure, there’s a remarkable amount of work that goes into every aspect of the design and build of one, but up close, it’s hardly distinguishable from a set of fan blades.”

According to Choma, one of the most impressive apparatuses the group saw was the enormous system of pipes that transport steam from the reactor building into the turbines.  “You wouldn’t expect something as simple as a set of pipes to be so impressive, but in addition their size, the engineering that went into the emergency shutdown system is something you just don’t get to see in a simple diagram.” Choma and his peers learned that if required, all of the power entering the turbine can be halted in a fraction of a second. “This is accomplished by a set of valves stretching from floor to ceiling in the turbine building. The pipes themselves don’t attach directly to the building, either. Because of the forces involved in such a shutdown, they rest on a suspension system which can absorb the shock of halting so much steam so quickly. Seeing up close how enormous the springs in this system are makes you realize very quickly how much power you’re working with,” says Choma.

Rising senior Milos Atz agreed, saying “I was incredibly lucky to be afforded the opportunity to visit the Millstone Power Station. As a chemical engineer, what impressed me most about the plant was its size.  Everything was massive.  I was blown away by the sheer scale of certain aspects of the plant; most notably the enormity of the pipes bringing cooling water in from the ocean and the turbine that was being refurbished.  I was also surprised by how complicated and interconnected the plant was.  It is incredible to think that it was designed without modern computers!”

He recommends that if offered again, the tour is a must for students of all interest levels. “You will not be disappointed.  The employees are friendly, informative, and helpful, and the industrial and technical scenery is absolutely breathtaking.”