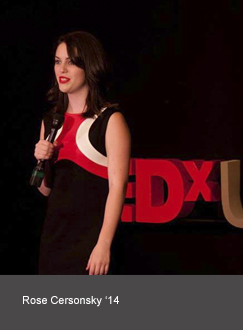 Rose Cersonsky, who graduated in May with a MSE major and a minor in computer science, spoke to her fellow graduates at the School of Engineering commencement ceremony.

“Often it’s not the technological impact the makes us memorable, it’s the lives we touched,” she said. “The greatest mark we leave on this world is the impact on those around us.”

Rose graduated with accomplishments nearly too numerous to list. She is an academically driven member of the Honors Program and has been named a Babbidge Scholar and New England Scholar during her time at UConn. She is the recipient of numerous scholarships and awards, including the Art McEvily Academic Scholarship and GE Advanced Materials Endowment Scholarship. Rose was a Rhodes Scholarship nominee and Marshall Scholarship Finalist, as well as a finalist for the Donald L. McCollough Leadership Award. She was recently named the School of Engineering’s Outstanding Female Scholar.

Rose has completed research in the Self-Assembled Functional Nanomaterials Laboratory under Dr. Mu-Ping Nieh and Hyunsook Jang. She has also interned twice at Pratt and Whitney in East Hartford, CT in the areas of structural alloys and polymeric materials. Her senior honors thesis examined optimizing polymer fluorescence for explosives detection. Her senior design project is “Design Rules for Composites from RTM Polyimides.” She counts Professor Serge Nakhmanson and Professor Mark Aindow among her favorite professors within the department.

“In her studies and research activities, Rose demonstrates levels of maturity and inquisitiveness that are uncommon for her age,” said Dr. Nakhmanson, Rose’s senior design project advisor. “She is one of the most diligent people that I have met and she is always a pleasure to work with.”

Outside of MSE, Rose is a member of Alpha Sigma Mu and tutor at the UConn Engineering Tutoring Center. She has served as United Technologies Corporation Engineering Ambassador, Vice President of curation of TEDxUConn, and multiple positions in UConn Engineering Ambassadors. In addition to her many involvements pertaining to engineering outreach and campus leadership, she has acted, danced, and participated in several productions at The Gary- The Olivia Theater at the Abbey of Regina Laudis in Bethlehem, CT and as part of UConn Dramatic PAWS (Producing, Writing, and Acting Students).

Zhaohui Wang is this year’s winner of the Outstanding Senior Woman Academic Achievement Award for the School of Engineering.

The Provost’s Office, the Alumni Association, and the Women’s Center annually honor outstanding graduating women from each of its schools and colleges. Wang completed her doctoral dissertation, “Communications and Networking in Underwater Acoustic Networked Systems” last year at UConn, where she was a member of the Wireless Communications Research Laboratory and the Underwater Sensor Network Research Laboratory.

She is now an assistant professor in the Department of Electrical and Computer Engineering at Michigan Technological University.

She is the co-author of OFDM for Underwater Acoustic Communications. The book has been described as the first to explain the processing techniques central to underwater orthogonal frequency-division multiplexing, which is a method of encoding digital data on multiple carrier frequencies. It will be published May 27 by Wiley.

They will work with the UConn Center for Students with Disabilities to engage in a study on various note-taking methods and study habits that have the potential to improve students’ organization, retention of the material and their overall learning experience. The grant was one of 17 awarded this semester.

The UConn IDEA Grant program is open to all majors at all of the university’s campuses, and awards funding to undergraduates  as a means to support projects designed by the students themselves. These can include artistic endeavors, community service initiatives, traditional research projects, entrepreneurial ventures, and other innovative projects. Proposals for the UConn IDEA Grant represented a variety of disciplines, ranging from fine arts to marine sciences.