Although UConn’s team in this year’s National Concrete Canoe Competition didn’t do as well as they hoped, they could still boast of some accomplishments. And they had fun. 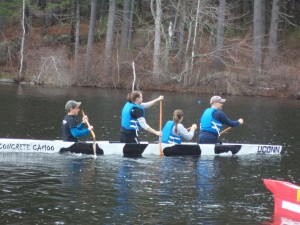 The eight-member team of engineering students (with Assistant Prof. Kay Wille of Civil and Environmental Engineering serving as advisor) was comprised mostly of newbies, so there was a steep learning curve. And rather than than sticking with tried-and-true methods of concrete-pouring, the adventurous crew tried out some new technology.

“This year was the first year that we incorporated a concrete spray gun, so we didn’t have a lot of experience going in and trying out this new technology,” said student and team member Domenic Kruszewski.

On top of that, they experienced some delays  in receiving the materials needed to build the canoe, so they took a penalty for missing the deadline in submitting a design paper.

Despite all this, they managed to reap some small victories. The women’s team came in fourth out of 12 for the sprint race, earning them a place in the finals. The co-ed team also placed fourth. 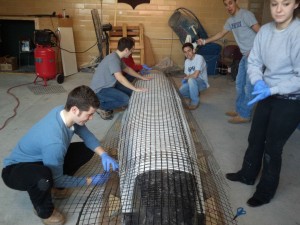 The UConn team finishes up their canoe.

It turns out that making a concrete canoe – let alone a good one – is a rather daunting undertaking.

“At first, the first-time members, including myself, weren’t sure what we were getting into,” Domenic said. “Construction is about four weeks, including pouring the concrete, and sanding, and applying different coats of paints and sealers. And then we apply our logo.”

“In the end, though, we saw that the other schools put in equal or more time into their canoes.”

From the start, they made a goal of reducing the thickness of the canoe walls from previous years. The effort paid off.

“We shaved about 100 pounds off the canoe from last year,” Domenic says. “That was quite the accomplishment.”

The competition requires that teams of college students build a concrete canoe from their own design, although the students can consult faculty or other professionals for advice. Scoring is divided into four events: design paper, oral presentation, final product, and races. The teams also give a short oral presentation of their project, followed by a question and answer session.

Richard Pérez Moyet, MSE Ph.D. student, has been selected to participate in the Naval Research Enterprise Internship Program (NREIP) for the second consecutive year. Richard is the recipient of The American Society for Engineering Education Fellowship Award as an intern for the 2014 Office of Naval Research NREIP program.

NREIP provides competitive summer research internships to undergraduate and graduate students who are given the opportunity to participate in research at approximately 29 Department of Navy laboratories.

Richard will conduct his research this summer at the Naval Research Laboratory in Washington D.C. He seeks to develop a new class of energy harvesting devices utilizing inter-ferroelectric phase-change materials and is expanding upon his 2013 NREIP research carried out at the Naval Undersea Warfare Center in Middletown, RI.