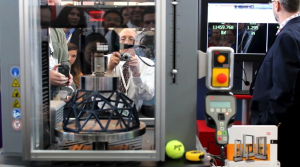 design a twelve-inch scale model of a geodesic dome that could potentially be used to provide efficient shelter for individuals living in third world nations.

MSE seniors Luke McCarthy, James Kos, and Nick Poulos represented UConn at the competition. Their modified geodesic design, comprised of welded A36 structural steel, maxed out the compression tester at over 11,000 lbs. It doubled the load of the nearest competitor and set the team apart as the only dome design that did not fail during testing. UConn placed second behind Virginia Tech’s cast aluminum dome, largely because UConn’s design exceeded the maximum force allowed to factor into the judges’ final decision.

Although McCarthy, Kos, and Poulos will graduate in the spring, members of UConn Material Advantage look forward to participating in the competition again next fall.

The 2014 AIChE (American Institute of Chemical Engineers) Annual Meeting was held in Atlanta, Georgia this year. It is the premier forum for chemical engineers, and academic and industry experts presented developments on a wide range of topics relevant to cutting-edge research, new technologies, and emerging growth areas in chemical engineering.

Over the years, the Undergraduate Poster Session has become one of the highlights of the conference. Competing students each prepared a poster detailing progress and contributions on their independent research projects. During the conference, the students presented their work to individual judges. Over 80 judges were in attendance, all of whom were senior AIChE members from academia or industry.

The research categories included: Catalysis and Reaction Engineering; Sustainability; Food, Pharmaceutical and Biotechnology; Separations; Environmental; Education; Fuels, Petrochemicals and Energy; Computing and Process Control; and Materials Engineering and Sciences. Awards were presented to the top posters in each division.

We’re pleased to announce that the following UConn CBE undergraduates won in their divisions: