Two Civil Engineering students have received generous scholarships from The MOLES, an association of professionals engaged in heavy construction based in Woodcliff Lake, NJ. Jillian Condiracci was awarded the $9,000 Memorial Scholarship, and Raymond Chan was awarded the $1,000 Education Committee Student Award. Jillian is president of the UConn Steel Bridge Club and secretary of the Concrete Canoe Association.  Raymond is an undergraduate research assistant in the laboratory of Dr. Shinae Jang and president of Chi Epsilon, the civil engineering honor society.  The scholarships are reserved for students who demonstrate academic excellence and a desire to pursue careers in construction engineering and management. 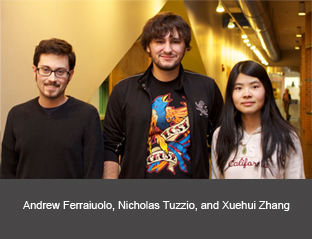 The NYU-Poly CSAW challenges are among the oldest and broadest student-led competitions, and encourage awareness of the increasing threats to privacy and security issues for individuals, governments, business and smart infrastructure. The competition features a variety of different tracks in addition the Embedded Systems Challenge in which the UConn team competed. The Embedded Systems Challenge involves students in understanding and solving problems related to secure hardware manufacturing and comprises two separate competitions, the Physical Unclonable Functions (PUF) and Malicious Processors Design contests.

In September, teams submitted short proposals describing how they would approach the challenges.  From these, 10 teams were selected to compete in the Embedded Systems Challenge finals. Each team received field-programmable gate array (FPGA) boards and the source codes – the materials that formed the core of the challenges.  An FPGA is a semiconductor device that can be programmed post-manufacture to include desired product features and functions, adapt to new standards, and reconfigure hardware for specific applications even after the product has been installed in the field.

Before leaving for New York, the team submitted reports and source codes, which they then demonstrated and explained during the final competition.  In the PUF segment of the competition, under the leadership of Nick Tuzzio, the team designed a novel technique using ring oscillators to identify each integrated circuit from a foundry. The team’s entry captured first prize.  For the Malicious Microprocessor portion, under Xuehui Zhang’s leadership the team had to attack the microprocessor 8051 from Intel.  The team proposed 10 novel methods to attack the microprocessor, any one of which would cause serious damage to the users. Their entry received a third place finish.

Heather Leask, a sophomore Chemical Engineering student, will travel to Costa Rica in January as part of an Ecology and Conservation Tour offered through UConn’s Louis Stokes Alliance for Minority Participation (LSAMP) program.  On the nine-day tour, which will begin January 5, students and a UConn faculty member will visit rain forests, volcanoes, and natural parks to learn about conservation efforts and the region’s plant and animal species and habitats while also being exposed to the history and culture of the region. UConn’s LSAMP program supports students from African American, Latino/a, Native American, and other underrepresented populations as they pursue degrees in the challenging fields of science, technology, engineering, and math (STEM).  The students raised money for the trip by helping to clean up after the October snowstorm that left a wake of downed and damaged trees across Connecticut.