To a packed room at the Alumni Center, 10 Engineering graduate students presented some very ambitious research projects, and a GE official was honored for her accomplishments and generosity.

As part of the second annual GE Night, students were given a showcase for their research projects, which ranged from copper oxides and conductive ceramics to advanced arc pressure modeling. The projects are part of a 2012 initiative in which GE Industrial Solutions committed more than $7 million dollars to the School of Engineering. The funding goes to graduate student fellowships, research in material sciences and engineering, and an endowed professorship in the School of Engineering. 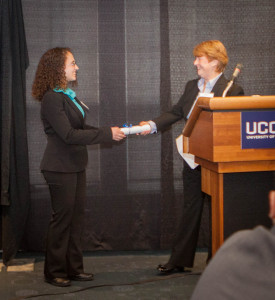 Paul Singer, General Manager of Technology for GE Industrial Solutions, and a 1988 electrical engineering graduate of UConn, noted that while GE has had a long tradition of recruiting on the Storrs campus, this marks a major milestone in our relationship. “For as long as I can remember, UConn has been a top-talent school for hiring GE employees,” he said, “but tonight, seeing the first results of our long-term research partnership, in addition to our continuing recruiting relationship, is truly a new beginning, and as an alumnus, particularly gratifying.”

Dr. Mun Choi, UConn Provost and Executive Vice President for Academic Affairs noted the long tradition of collaboration between UConn Engineering and GE, as well as the many UConn alums who have gone on to work for the company. So the partnership between UConn and GE only reinforces that relationship.

“I think going forward, there’s no doubt that this collaboration will be stronger as a result,” he said.

Engineering Dean Kazem Kazerounian said that the still-new partnership has been a fruitful one, and promises to bring more positive results.

He introduced Linda Jacobs, one of 14 GE engineers around the world to earn the Edison Award for her significant contributions to advanced industrial circuit breaker technologies, and for her work mentoring early-career engineers in GE’s Edison Engineering Program. As part of the award, Jacobs received $25,000, which she is donating to create an endowed scholarship at UCONN’s School of Engineering. Scholarships in the amount of approximately $1,000 will be awarded annually to a mechanical engineering student in perpetuity.

Jacobs said she wanted to create a scholarship to help and encourage future mechanical engineering students because she can still remember the excitement she felt as a young engineer.

“Nothing compares to the thrill of getting your first patent or seeing the product your team designed shipped to a customer,” she said. “I enjoy seeing the energy and excitement of the young engineers experiencing this for the first time The UCONN School of Engineering gave me the strong technical foundation necessary to make the contributions the Edison Award recognizes.  And I am grateful that I have the opportunity to pay that forward through this scholarship.”

Alexandra Merkeriou, a graduate student who receives her PhD in May, accepted the scholarship on behalf of the School. “I would also like to thank Ms. Jacobs for being an inspiration and showing us what we can accomplish in our careers,” she said.

Matt Dougherty, said if any of the students’ research were to be adopted by GE, UConn is a good place to consider further developing it for commercialization.

“One of the reasons we invested in the program is because UConn Tech Park gives us a platform to use if we invest in the technology,” he said.