“UConn’s a really up-and-coming university where we’re leaps and bounds ahead of where we were ten years ago and there’s just so much research money coming in and people are starting to look at UConn as a great engineering school,” says alumna and graduate student Kathryn Gosselin (B.S. Mechanical Engineering; math minor, ’09), a Ph.D. candidate working in the Optical Diagnostics Laboratory under the thoughtful guidance of Dr. Michael Renfro. 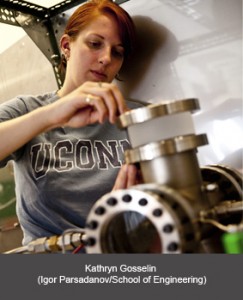 Gosselin’s research interests span experimental combustion and optical diagnostics, and she is currently involved in studies involving spark ignition of hydrocarbons, flame extinction processes, and three-dimensional flame imaging. Her thesis research focuses on the effects of composition, pressure, temperature, and combustion products on the ability to light afterburners at high altitudes. Additionally, her work on the causes of extinction in flames has applications in jet turbine engine operation. She is one of just five students to receive a prestigious $10,000 Koerner Family Fellowship for the 2011-12 school year.

Throughout her undergraduate years, Gosselin won top honors, including scholarships and awards for her outstanding academic performance. Her intelligence and spark caught the attention of Pratt & Whitney, where she held summer internships involving testing and problem resolution across three summers.

Gosselin’s parents encouraged her to study engineering, since she had always received good grades in her math and science classes, but they nonetheless accepted her decision to pursue a liberal arts degree. Her father, who had studied electrical engineering and computer science in college, “was in tears when I got my acceptance letter,” Gosselin says. “He was really excited but I was like, ‘Okay, Dad, but I’m not going to go to UConn.’”

After applying and being accepted to a few other engineering schools, Gosselin’s choice of UConn was ultimately an easy one.  “The trade-off as far as quality versus price just works out in UConn’s favor,” she says. “Some of the engineering schools I applied to cost four times as much as UConn, but none of them were four times as good. Also, UConn has invested heavily in the School of Engineering during the last decade, and that level of support is very attractive.”

Gosselin has been very happy with her choice. “My professors have been really phenomenal, and the department is big but not too big. So, as an undergrad I felt like I knew my professors well enough to ask them for help… and by grad school, even more so.”

In addition to her rigorous engineering studies, Gosselin says, she enjoyed the opportunity to take general education courses, such as “Feminism and the Arts” and philosophy classes, which she says challenged her in more abstract ways than did her math and engineering courses.

Looking back on her undergraduate engineering years, Gosselin offers the following advice for current students: “Get to know your classmates as soon as possible. Most professors allow collaboration on homework, and you sort of need that. One person might get one piece of the puzzle, and you might get something different, and you combine your ideas. That’s important, because it’s how engineering teams work in the real world, whether in labs or office cubicles.” She also encourages students to ask question of their professors, in class, during office hours, or via email.

Gosselin in on track to receive her doctorate in 2014 and is considering a career in either academia or an advanced industry laboratory. She can be seen in a recent video developed by the School of Engineering for prospective graduate students.