An interdisciplinary team of students has proposed an innovative solution to the problem of stormwater runoff from UConn’s South Campus dormitory complex in response to a U.S. Environmental Protection Agency student competition, the Campus RainWorks Challenge.

Across the fall semester, the six-member team developed a formal proposal, a video and design boards describing their environmentally low-impact solution to stormwater runoff, which currently flows from the roof of the South Campus complex through external downspouts, into yard drains and an underground piping system where it is released into UConn’s scenic Mirror Lake.  View the team’s proposal here and video below.

The premise for the EPA competition is that the intersection of urbanization with the natural environment often results in significant degradation of water supplies and the erosion and flooding of nearby streams, leading to habitat, property and infrastructure damage.  The program encourages college students to become involved in designing solutions for stormwater runoff that reduce environmental damage while enhancing the human experience. Four teams nationwide will be awarded cash plus research support when the winners are announced in April.

The team chose the South Campus complex largely for its proximity to Mirror Lake, along with size and volume of students served.  Applying their budding expertise and experience in engineering, natural resources, environmental studies, landscape design and journalism, the students designed a comprehensive solution. 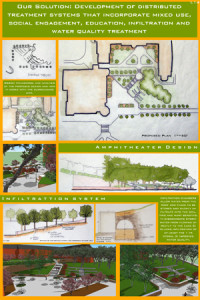 Their proposal marries a variety of integrated elements pivoting on a so-called “infiltration structure” embedded within an amphitheater, which would capture runoff from the dormitory roofs and courtyard drains, and direct it to three tiers of structures positioned behind terraced seating.  During a storm, water from the roofs, sidewalks and grassy areas would flow into the sand-filled underground infiltration chambers, where it would filter slowly into the soil. In addition, the site will include a series of overflow pipes along the central staircase that will capture any excess water from the full infiltration basins and flow into an adjacent drain.  Important aesthetic and social elements include a handsome, naturally terraced gathering place, a performance amphitheater, educational graphics and text that visitors may explore to understand the runoff treatment system, and other site improvements.

In their proposal, the students note that although UConn is a rural, bucolic campus, it shares many features common to an urban landscape, such as high population density, a significant share of paved or built surfaces, and relatively low plant cover.  Mirror Lake, built to enhance the beauty of campus, now essentially serves as a stormwater detention pond and, as such, has become heavily polluted with sediment, nutrients, and contaminants such as phosphorus that are transported by rainwater runoff.  In recent years the iconic lake has suffered algal blooms and overgrowth by choking aquatic weeds. Importantly, the lake also discharges into a stream that feeds the University’s and town’s watershed.

Junior Andy Bilich contributed to estimates of the economics, budget, implementation costs, and GIS (geographic information system) analysis and mapping for the project. The GIS analyses helped the team calculate the area of pervious versus impervious “covers” that affect runoff volume, direction and rate.  Impervious covers include paved surfaces, roofs, concrete and other hard surfaces that produce runoff.  The project site featured 55% impervious and 45% pervious covers.  Bilich remarked that he learned from his teammates’ different perspectives and approaches during the team’s weekly meetings. “I had a basic knowledge about hydrology, but I learned so much more about stormwater from this experience.”

The team’s comprehensive proposal incorporates new plantings of trees, which would provide significant canopy cover leading to energy savings, enhanced water retention and improves the beauty of campus.  Recommended soil amendments would reduce erosion by increasing the absorption of water, and the creation of attractive outdoor gathering spots would foster a sense of peace and community. By replacing the current, demanding non-native grasses with native gra 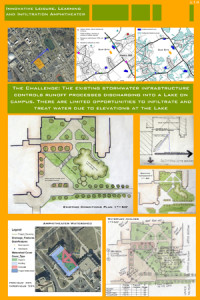 sses, the team argues the site will require less water, fertilizer and maintenance.

Junior John Jerman found the interdisciplinary nature of the project to be valuable.  “Landscape architecture is a social science, or a social art, that concerns itself with how the built environment affects the community around it – in this case, the student population. It was interesting for me to work with non-landscape architects, who approached the challenge from a different vantage point. I learned how to compromise, to communicate effectively and to persuasively present my views.” Jerman, who developed and iterated on a number of different designs, was especially challenged by economic limitations placed on the project, which influenced the team’s final design choice.

Sophomore Faye Koenigsmark found the hands-on project both exciting and nerve-wracking: she was learning how to calculate key figures, such as the volume and flow rate of runoff, peak flow runoff, infiltration rates, and contaminant levels – especially phosphorus – in her coursework even as she was applying them toward the project. “I spent a lot of time crunching numbers with Dr. Clausen, who helped me locate data in catalogs and develop the calculations for each of three different sites we considered. It was challenging, having to learn everything so quickly, but at the same time it helped to reinforce what I was currently learning in class.”  She remarked that during a recent rainstorm at home, she found herself responding to the rain not in a visceral way but rather as an environmental engineer: she began evaluating her surroundings in terms of pervious and nonpervious coverage and sources of runoff to help analyze the current stormwater infrastructure.

Dr. Vadas said he and Dr. Clausen strove to empower the students by letting the team work out challenges on their own. Stormwater is a particularly attractive subject for interdisciplinary study and applications-oriented learning experiences for sophomore year students, according to Dr. Vadas.  The project allowed the students to apply the principles they were exploring in their coursework into practice on a meaningful and highly accessible project.  It also revealed to the students how their skills and energy can make a big difference, and the team is hopeful that UConn will act on their recommendations.