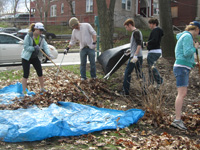 According to Friends of Pope Park president and UConn alumnus David Morin, the students “reclaimed the worst section of Pope Park, the soccer field, where a steep embankment overlooking the field had grown into a virtual thicket of brambles, vines and weeds.”  The thicket separated the playing fields from viewing benches where soccer fans might otherwise congregate to watch games, and the thick foliage also collected trash, making it even more unsightly.

For six hours each of the two Sundays, a total of 50 UConn engineering students applied their muscle and goodwill to clearing out the overgrowth, bagging and removing debris, planting new greenery and seeds, raking and generally improving the appearance of the soccer field and adjoining areas.  The Friends of Pope Park sustained the students with donated food and beverages, and supplied tools and yard implements throughout the cleanup efforts. Morin notes that as the students completed their cleanup efforts and prepared to leave the park, arriving soccer players were able to express their gratitude for the students’ efforts.  He said, “The UConn engineers took the worst section of the main body of the park and made it beautiful and passable.”

For the students, it was a lesson in giving back to the community and in seeing first-hand the power of teamwork.

Morin was especially gratified to note that soon after the second volunteer weekend, he was contacted by a member of UConn’s chapter of Engineers Without Borders, Stephen Ecsedy, who explained that the group was interested in a longer-term project for the park involving the design and construction of a seating terrace to overlook the soccer field.

Pope Park, which is located near the Frog Hollow section of Hartford and is a popular gathering spot for families, hosts an estimated 50,000 visitors each year, according to Morin. The park was designed in the 1800s by the famed Olmstead Brothers Landscape Architects and spans athletic fields, a recreation center, a pond, meeting spaces and other features.