Now that engineering students have nearly unlimited access to valuable ANSYS software, officials from the company gave an introductory presentation on how to use it.

ANSYS, Inc., a Pittsburgh-based company that develops engineering simulation software, is providing free of charge its powerful engineering simulation software to UConn’s students. Because ANSYS software is used extensively by engineering companies around the world, access to it will greatly boost the students’ value as potential employees. The ANSYS software will also be used extensively to support research activities across the School.

“This is a win-win for everybody – UConn, Ansys and the industry,” said Sean Harvey, Lead Technical Services Engineer for Ansys. “We’re building an ecosystem of simulation.”

Harvey said officials from other companies tell him that students often come out of school without knowing how to use ANSYS software – that’s a significant disadvantage because it’s used extensively by engineering companies around the world.

One of the benefits of the 3D simulation software, Harvey said, is that it gives students a better sense of what they’re working on. “We find that students can better grasp the concepts – seeing fluid dynamics in 3D images helps them understand.” 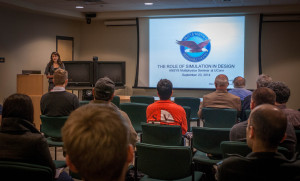 Jennifer Duke, Director of Aerodynamics for Pratt & Whitney. speaks at the workshop.

He told the students that the software is just one of many tools to do their work and cautioned them not to rely too heavily on it. That said, he also pointed out that it can provide surprisingly accurate representations. For instance, he said, Disney once hired his team to develop a simulation of a new ride. The simulation predicted different results from the experiments conducted by Disney’s engineers. As it turned out, the experiment had an inherent flaw, and it was the Ansys simulation that presented the most accurate outcomes.

Jennifer Duke, Director of Aerodynamics for Pratt & Whitney – one of the many companies that uses Ansys – also spoke to the students and faculty members.

She called the new partnership “an exciting opportunity for the UConn Engineering Department.”

“It’s going to open up a lot of possibilities for us to partner with you,” she said.