The School of Engineering’s recent annual Scholarship Awards Ceremony gave students a chance to meet and talk with the people who gave them the opportunity to come to UConn.

“The night is designed so that you are at the center of it – we are proud of you,” School of Engineering Dean Kazem Kazerounian told the students assembled at the Ballroom in the Lewis B. Rome Commons.

He also told the students that “a great many people have helped you get to this point” – faculty, department heads and especially their families. He made a special point of thanking the students’ sponsors. Of all the universities they could have supported, he said, they chose UConn. “And for that, we thank you.” 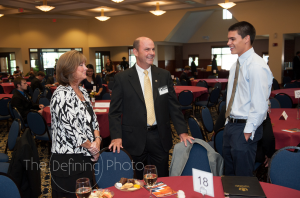 Keynote speaker Doug Shidler of Sikorsky Aircraft and his wife, Trish Shidler, speak with a School of Engineering student

To illustrate the importance of persistence and passion, keynote speaker Doug Shidler, RAIDER program manager for Sikorsky Aircraft, told the students how he got his first job. He admitted that his grades weren’t good enough to get him an interview with Sikorsky. Nonetheless, he waited around until the end of job interview day.

The representatives from Sikorsky did, and he received a job offer an hour before his last final. He’s been with the company ever since.

He asked for a show of hands from people who have been given the advice to “write down a list of pros and cons.”

Instead, he said, focus only on the positive – “those things that really get your juices flowing.”

“Never write down the things you don’t like, that you don’t want to do, the negative,” he said. “What you set yourself up for is avoiding a great opportunity because there’s something bad associated with what you want to do. Well, no matter what you do, that stuff still exists, so get over it.”

Student speaker Michael Johnson, a senior majoring in mechanical and civil engineering, told the crowd of his upbringing in Bridgeport as one of two siblings with a single mother.

“My mother struggled significantly financially, but even though she did not have an education of her own, she always told us the cliché that ‘education would be the difference’ and that it would make the change in our lives, and that if we just worked hard enough in school, the difference would come,” he said. “But hard work alone is not always the key.”