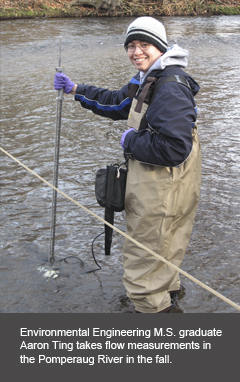 It has become customary for millions of Americans to consume both prescription and over-the-counter drugs with regularity.  Unfortunately, this habit comes with adverse effects to our environment.

Dr. Allison MacKay, an associate professor in the Civil & Environmental Engineering Department with a dual appointment in the Center for Environmental Science & Engineering, recently received nearly $300,000 in grant funding from the National Science Foundation to support her studies aimed at monitoring the impact of pharmaceutical compounds in two rivers, Connecticut’s Pomperaug and the Little Miami River in Ohio.

The Pomperaug, which flows for a 13.4 mile-long stretch through Woodbury and Southbury, is an ideal location for MacKay’s study because of its proximity to Heritage Village, a nearby retirement community housing nearly 3,500 people aged 55 and above. Like most such communities, Heritage Village is characterized by above-average prescription-drug use among residents, as older people have greater incidences of high blood pressure, high cholesterol and other health problems than the general population.  MacKay’s studies will focus on the effect that sunlight has on the degradation of pharmaceutical compounds, and how quickly the drug concentration in the sampled water drops off.

For the Little Miami River project, MacKay is collaborating with Dr. Yu-Ping Chin at The Ohio State University to measure the East Fork of the river.  The Ohio site is located in a large, agricultural watershed with high sediment transport. This differs from the Pomperaug River, which is located in a forested watershed with very clear water in Connecticut.  Both sites have similar-sized wastewater treatment plants and rivers, which facilitates greater comparability in determining the differences and similarities between the two rivers in terms of pharmaceutical reduction rates.

MacKay and her team will be collecting samples every 1 to 2 kilometers downstream, for a total distance of almost 9 kilometers from the wastewater treatment plants. “We just don’t know how long it takes for the sun to break down these chemicals,” said MacKay. “It could range anywhere from hours to months.” They will be doing two sampling campaigns, measuring the compounds at night and during daylight hours.  “The difference in pharmaceutical compound attenuation or degradation rates between the day and night will indicate the effect of the sunlight,” said MacKay. 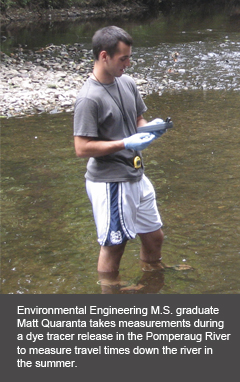 The current concentrations of pharmaceutical pollutants in these rivers are not deemed sufficiently high to harm humans. However, even the current levels have had a clear negative impact on the environment. “Imagine an eyedropper’s worth of chemicals being put into an Olympic sized swimming pool. It may not seem like a lot, but it is having an effect,” said MacKay. Although organisms aren’t dying, in recent years, numerous studies have reported deformations in fish and amphibians, as well as changes in the overall ecosystems in rivers where pharmaceutical drugs are found in even moderate concentrations. There are currently no regulations that drug manufacturers must comply with in regards to affecting acute organisms.

Despite the improper disposal of medications, these compounds still reach our water systems after being digested and expelled. “Simply by excreting fluids into the wastewater system, you are introducing the drugs into the environment,” said MacKay.  “If these chemicals are inevitably going to be introduced to our water supplies, it is important to know how long they stay.” Ideally at the end of her research, MacKay and her collaborators will have some measure of how quickly these compounds degrade, and what impact the sun has on the degradation.