The opportunity to engage in exciting and meaningful academic research is prized by undergraduates across the spectrum of disciplines, and particularly those who are considering graduate school. Over the summer, UConn Engineering hosted nearly 50 students from across the U.S. in six different National Science Foundation-funded Research Experiences for Undergraduates (REU) sites.  The participants agreed that the 10-week programs afford students a singular learning experience.

“This experience taught me how to be an engineer and how to excel at it. Research teaches you a different way of thinking, you have to look at something from all angles to try and develop a new method that hasn’t been done before. There is no right or wrong answer; you create the answers,” said Victoria Tagarelli, an electrical engineering senior at Binghamton University who participated in the UConn Engineering REU focusing on trustable computing.  Victoria was hosted by Dr. Mohammad Tehranipoor and mentored by graduate students Xuehui Zhang and Kan Xiao.  She explained that her project relied upon prior research aimed at detecting counterfeit, recycled field-programmable gate arrays (FPGAs) – a type of integrated circuit that can be configured post-manufacture – and focused on proving and evaluating the efficacy of a detection method.

The six REU sites hosted by the School of Engineering were selected by NSF for funding based on competitive proposals and publicized on the NSF and UConn Engineering websites. Students apply to the REU(s) of interest and, once selected, they are immersed in a faculty lab where they work collaboratively with faculty and graduate researchers on a myriad of exciting investigations.

Besides the trustable computing REU, UConn Engineering hosted five others over the summer, in the areas of bio-grid initiatives, cyber-aquatic systems, next-generation energy processes and systems, smart structures, and entrepreneurship.

A fellow participant in the trustable computing REU was Shelley Kandola, a rising senior at St. Lawrence University in Canton, NY, who worked alongside Dr. Jerry Shi. Shelley deemed the experience a “lesson in independence.”  The focus of her research was on efficient and secure implementations of cryptographic algorithms, focusing specifically on the Advanced Encryption Standard (AES).  “I implemented it in at least three different ways in both C and Assembly Language, and then implemented a secure, masked version that shielded it against side-channel attacks.” 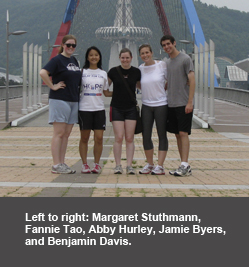 focusing on smart structures involves an international component and is conducted in partnership with the University of South Carolina, University of Akron and KAIST (formerly the Korea Advanced Institute of Science & Technology).  After preparing their research plans under the careful guidance of Dr. Richard Christenson, the six 2012 participants spent five weeks at KAIST in Korea, where they conducted projects focusing on structural control and structural sensing.  UConn civil engineering senior Maggie Stuthmann of Catonsville, MD, was part of a three-person team overseen by Dr. Juan Caicedo of the University of South Carolina. Their project involved the estimation of the force of a human step on a sensor-embedded staircase based on the induced vibrations.  Maggie explained that the ability to accurately model the force of a human step – paired with visual surveillance data – may be used by security personnel to identify individuals who are carrying suspiciously heavy items.  She said that her experience strengthened her interest in pursuing a graduate degree, and she remarked upon the impressive level of support and collaborative mentality among the participants. 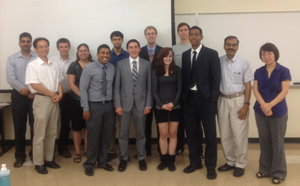 ter Sensor Network Lab at UConn – was Kaleel Mahmood, a UConn senior from Shelton, CT.  Kaleel’s work involved the localization hardware and software related to an autonomous underwater vehicle (AUV), which hosts the communications devices that are essential to the ongoing cyber-aquatic systems research.  Kaleel explained, “Essentially, I implemented localization algorithms so that the AUV’s current position could be obtained when it was in the water.”

He found the REU experience very positive. “I learned how to apply classroom academic concepts to real world software and hardware implementations. For example I was taught basic programming in school but in the REU program I was actually shown how to flash my code on a digital signal processing board and run it from memory. These experiences reaffirmed my decision that engineering was the right major for me because it showed the direct connection between theoretical knowledge and actual application.”

Also participating in the CAS REU was Shae Hurst, a senior in electrical engineering at the University of Washington, who remarked, “Research is a lot of work and takes a lot of time. I never really realized that before I started this and it was great to learn how academic research is carried out.” Shae’s work involved the performance of Matlab simulations of the transmission of data through underwater channels. “I tested multiple scenarios to see how the addition of pre-coding and the use of different mapping methods would improve channel performance. The transmission of data through the water is much more difficult than through air.”

One REU deviated from the normal STEM-based experience: the innovation and entrepreneurship REU paired students with both a faculty member and a mentor from one of 10 industrial sponsors, enabling participants to gain valuable experience not only in researching a technical topic but also in marketing and product development with the aim of nurturing an entrepreneurial mindset.  The brainchild of Drs. Jeffrey McCutcheon and Richard Dino (Business), the REU also immersed participants in a business and entrepreneurship oriented short course intended to help them learn the mechanics of business and better understand how academic research becomes a commercial reality.  The 2012 participants recently presented their work before an appreciative audience of industry and academic professionals during a forum in Tolland.  Read a related story here.

The REU in next generation energy processes and systems, directed by Drs. Kevin Murphy and Mike Renfro (Mechanical Engineering), attracted 11 student participants this summer. Central to the REU focus is the need to explore and develop clean, sustainable energy technologies and sources to meet the world’s ever growing demand. In the next 25 years alone, energy usage in the U.S. is projected to grow by more than 50%.  The excitement and challenges of developing new energy strategies are at the heart of this REU.  Projects this summer focused on various types of systems, including combustion systems, dye-sensitized solar cells, fuel cells, and biofuels, to name a few.