On March 13-14, 2008, the National Academies of Science & Engineering held a “Summit on America’s Energy Future” in Washington, D.C. This two-day meeting, featuring some 26 presentations, provided a critical overview of recent influential energy studies and initiatives. Given the present state of national and world-wide concerns about energy issues, the summit stimulated discussion among the presenters and the audience, many of whom had diverse viewpoints dealing with energy and its future. Two of the important messages emerging from the summit were: 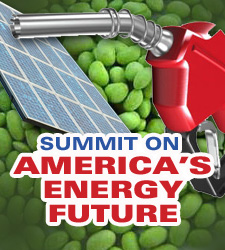 Senator Jeff Bingaman (New Mexico), who serves as Chair of the Committee on Energy and Natural Resources, led off the summit with a timely quote: “I am inaugurating a program to marshal both government and private research with the goal of producing an unconventionally powered virtually pollution free automobile within five years.” The quote, he explained, was from President Richard Nixon’s 1970 message to Congress. Senator Bingaman then outlined a recent history of the U.S. government’s starts and stops in energy technology policy.

A presentation was given by Dr. James Schlesinger, the nation’s first Secretary of Energy (under President Jimmy Carter). “In the political system, they do not think quantitatively….The first rule is to get elected. The second rule is to get re-elected. Alarm fades [the 1970’s oil crisis].” He used the story of the frog thrown into hot water and the frog immersed in slowly heated water, to illustrate the plight of the energy consumer.

The cost spread of reducing greenhouse gases was presented in a very illuminating talk by Jon Creyts and Ken Ostrowski of McKinsey & Company. Dr. Jose Goldemberg, Secretary for the Environment, State of São Paulo, Brazil and Co-chair of the Global Energy Assessment Council, International Institute for Applied Systems Analysis, provided an overview of a practical biofuel program. Nobel Prize winner Dr. Steve Chu (Director, Lawrence Berkeley Laboratory and Co-Chair of the Interacademy Council Study Panel on a Sustainable Energy Future) and the Department of Energy’s Undersecretary for Science, Raymond Orbach both noted that the digestive system of the Formosan termite may hold the secret for cheap, plentiful lignocellulosic biofuels.

The summit provided a rich resource of material and questions on America’s energy future. Energy and climate change are really big problems, demanding more than a single goal, “man-to-the-moon” approach. An unanswered question is: what public policies do we need to stimulate American innovative talent and industriousness to address these issues?