United Technologies Corporation (UTC) and UConn Engineering held a day-long workshop in late June to discuss how experts from industry and academia can come together to develop new engineering techniques that will make it easier to successfully build products and services that combine complex software, hardware and mechanical components. 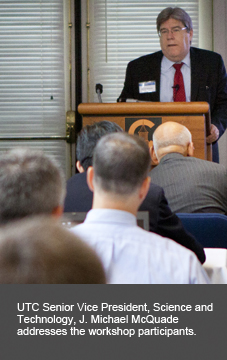 The workshop provided a forum for researchers from UTC’s business units and UConn Engineering to discuss theoretical and practical advances in model-based systems engineering and to identify specific areas for collaboration.  UConn Provost Mun Y. Choi and UTC’s Dr. McQuade, opened the workshop with overviews of the partners’ extant expertise and objectives in developing advanced systems engineering models, processes and concepts.  “The workshop was very successful, exposing teams from both UConn and UTC to the capabilities in our organizations and the challenges we can pursue together,” said Dr. Michael McQuade, UTC Senior Vice President for Science and Technology.

UTC’s commitment to investing in systems engineering education and research is squarely rooted in the increasing complexity of products of all sizes and types. UTC businesses are major players, for example, in Boeing’s 787 Dreamliner, which is widely regarded as having one of the most complex and sophisticated systems architectures in the world of passenger planes. UTC Aerospace Systems (UTAS) supplies the cabin air conditioning and temperature control system, as well as critical systems such as nitrogen generation, electrical power generation, remote and primary power distribution, fire detection and suppression, electro-mechanical brakes, thrust reversers, proximity sensing, fuel quantity indicators and fuel management software.

The flawless integration of such subsystems into the larger systems of the plane requires a holistic approach that considers how seemingly independent subsystems interact with – and sometimes compete with or thwart – other subsystems as well as environmental changes while operating.  The Dreamliner is just one example of the accelerating systems complexity underpinning everything from the power grid and iPhones to SpaceX’s Dragon spacecraft and hybrid cars.

According to UTC Professor of Systems Engineering Dr. Pattipati, using a model-based systems engineering (MBSE) approach from the outset, when a customer is articulating requirements, and consistently throughout the design, prototyping, testing and evaluation, and production stages, ensures the subsystems communicate and perform in a more cohesive, directed f

ashion. This approach also results in significant design and production cost savings, while improving reliability and on-time delivery of products.  Rather than designing and building expensive working prototypes and then testing and evaluating performance, MBSE allows designers to develop comprehensive, complex models and to test them inexpensively and quickly in weeks or months versus the years required in conventional non-model based engineering.

“During the 1960s, the U.S. excelled at model-based design and development, as evidenced by the Apollo program, for example. But we no longer approach R&D in the same fashion,” remarked Dr. Pattipati.  As a result, U.S. companies are having to rediscover the model-based approach, and universities are – in turn – responding by establishing systems-based engineering curricula to meet marketplace needs.

Building on this idea of reclaiming America’s former primacy in MBSE, last year UTC and UConn began to discuss the idea of founding a collaborative focal point for advanced systems engineering.

During the June workshop, three panel discussions focused on systems-level modeling and robust design; controls, synthesis and design optimization; and embedded and software intensive systems. The wide-ranging discussions touched upon modeling across multiple domains, analysis techniques and methodologies that span the product design and development lifecycle (e.g., requirements verification and validation), optimization and control of cyber-physical systems (including sensing, actuation, computation and supervisory control), and verification and validation of software-intensive systems.