Tackling the Science of Disaster 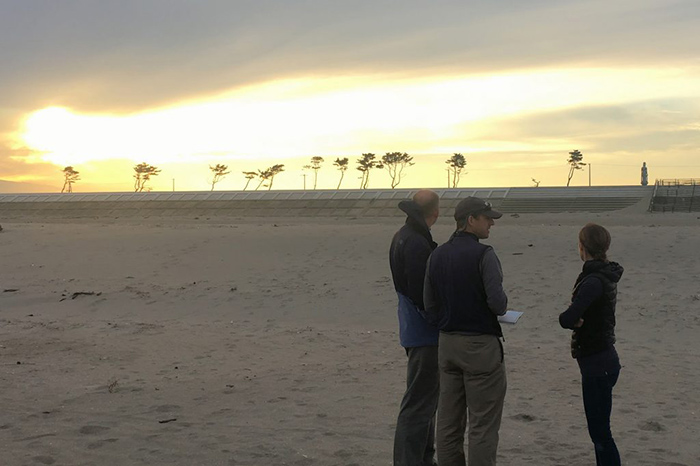 UConn professors on the beach near Sendai, in northeastern Japan, surveying the damage left by the tsunami of 2011. Note the recently raised sea wall, and trees with healthy branches indicating the height of the 2011 tsunami wave. (Photo courtesy of William Ouimet)

By Amanda Falcone
This story originally appeared in UConn Today 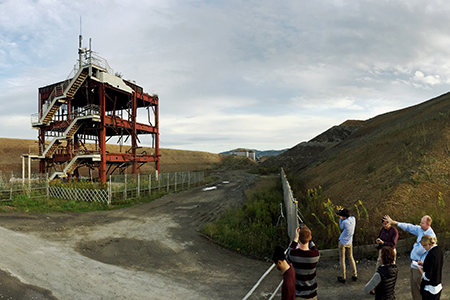 The group visiting and discussing the tsunami-wrecked Disaster Management Center in the coastal town of Minami-Sanriku. In March 2011, the 12 meter high building was covered by tsunami waves more than 15 meters high that were triggered by M9.0 Tohoku Earthquake. 43 local people were swept to their deaths from the building. The mounds of dirt adjacent to the building reflect the decision to raise the elevation of the ground in the coastal town to mitigate the effects of any future tsunami. (Photo courtesy of William Ouimet)

An earthquake off the coast of Japan on Nov. 22 struck the same area that the UConn group recently visited, and hit close to the area that was devastated in 2011. Although it caused far less destruction than the 2011 earthquake and tsunami, this year’s earthquake was another reminder of the importance of understanding and being prepared for disaster.

In 2011, an earthquake and tsunami devastated Japan, destroying buildings and claiming and changing lives. That natural disaster and its aftermath can be studied from many different perspectives, and has attracted the attention of three UConn professors in different fields of study who want to explore interdisciplinary opportunities.

Eleanor Ouimet is an anthropology professor; William Ouimet teaches geography; and Richard Christenson is a civil engineering professor. They represent three fields that don’t traditionally work together, but they have at least two things in common: an interest in disaster science and a desire to learn from one another.

“Interdisciplinary is a big buzz word right now, but how you do it is unclear,” Eleanor Ouimet says. “We can all benefit from learning each other’s language.”

In an effort to encourage collaboration and bring together their fields of study, the three professors teamed up to apply for a 2016 Research Excellence grant from UConn’s Office of the Vice President for Research. The goal: to create new opportunities for international research in disaster science. 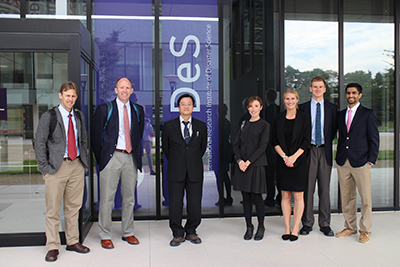 The professors were awarded a $50,000 grant, and began planning an October trip to Japan to see firsthand how the 2011 earthquake and tsunami affected the country – its buildings, culture, and landscape. Japan is a good model, says Eleanor Ouimet, because it experiences intense disasters, but also has a sophisticated system in place for preparing for, and reporting, those disasters.

The faculty members selected three undergraduate students to accompany them to Japan: Samuel Turek ’16 (ENG), who is majoring in civil engineering; Akhil Choudhary ’19 (CLAS), an anthropology major; and Cheyenne Haverfield ’18 (CLAS), a geoscience major. The students will earn academic credit for their work through independent study, and each has made a year-long commitment to the project.

At the start of the fall semester, the students researched Japan and the 2011 disaster. They also each learned a little about the others’ areas of study, before leaving on Oct. 7 for their five-day trip. Immersing the students in such an intense experience over such a short time frame was an experience Eleanor Ouimet calls “baptism by fire.”

While in Japan, the UConn delegation started out in Tokyo to get a sense of the country’s culture, before heading north to Sendai to see a part of Japan that was devastated by the tsunami. The group went on bus and boat tours of the area, observing the damage the tsunami left behind, and witnessed how those affected by the tragedy are moving forward. It was, they say, an intense experience. 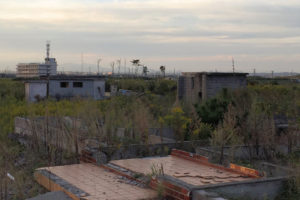 Remnants of the tsunami-devastated coastal village of Arahama near Sendai. (Photo courtesy of William Ouimet)

In each city, the Japanese are rebuilding, but leaving one building as is, to remind everyone of the tsunami  and the devastation it caused, says Turek, the civil engineering student. In more natural environments, such as parks, placards remind tourists of the tragedy. Japan has moved on from the disaster, but at the same time they are remembering and rebuilding.

Choudhary says he was surprised by the extent of the damage. “I don’t think we understood how prevalent it was,” he says. “This one affected such a big area.”

On their trip, the group also visited Arahama, a coastal area destroyed by the tsunami. Here buildings were flattened, with only foundations and random household items remaining. The area is not being rebuilt, and has been left largely untouched.

“There were children’s toys cast over the ground,” notes Eleanor Ouimet.

An important part of the trip was a visit to the International Research Institute of Disaster Science at Tohoku University, to share ideas and research. The institute recently completed a global study of tsunami hazards over the past 400 years. The UConn group was interested in learning about the tsunami and Japan, and the Tohoku University faculty and students were studying Hurricane Sandy, a powerful storm that hit the United States – including Connecticut – in 2012.

She says the three students were enthusiastic and open-minded, and it has been interesting to see how they each benefited from the trip: “It was a great experience to see the students working together.”

For Choudhary, the trip underscored the importance of interdisciplinary studies, and he believes UConn may ultimately be able to launch a disaster science center. To do so, he says, the University would need representatives from more fields of study to be interested in working together to further research in disaster science.

“You can’t stay in your discipline and analyze these things,” Choudhary  says. “You might miss something important.”