Taking the Wheel: The Rise of Self-Driving Cars 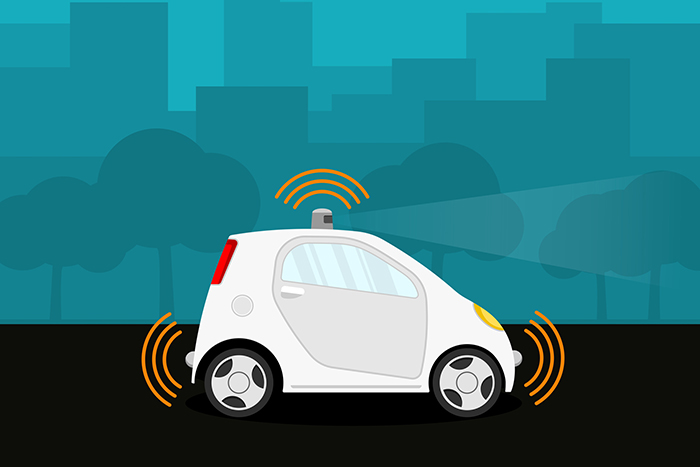 Once the stuff of science fiction, self-driving cars may soon be cruising our nation’s roadways. Federal and state authorities are rushing to keep up with this rapidly advancing technology. The U.S. Department of Transportation just issued its first guidelines for highly automated vehicles or HAVs and fully driverless vehicles could be operating on California roads by the end of the year.  Several bills calling for the extensive testing and regulation of autonomous vehicles are on Connecticut’s legislative docket this year. The University of Connecticut is helping state and regional officials address this issue as one of the sponsors of the first Northeast Autonomous Vehicles Summit taking place March 30-31 in Mystic, Conn. UConn Today discussed the brave new world of robotic cars with associate research professor Eric Jackson, director of the Connecticut Transportation Safety Research Center at UConn.

Q: How soon will we see self-driving cars on Connecticut roads?

A: Autonomous vehicles are divided into six levels (0 to 5) as defined by the Society of Automotive Engineers International. Level 1 includes basic features such as lane assist, self-parking, blind spot monitoring, and brake assist. These vehicles are already on Connecticut roads and these features are becoming standard on new vehicle models. Levels 2 through 4 are vehicles that operate at an increasing level of autonomy, as the scale increases. But these vehicles still rely on human interaction. Some of these lower level vehicles may already be on Connecticut roadways. The one that most people are familiar with is the Tesla and its “autopilot” feature. These vehicles can match speed to traffic conditions, keep within a lane, automatically change lanes without requiring driver input, transition from one freeway to another, exit the freeway when your destination is near, self-park when near a parking spot, and be summoned to and from your garage.

Currently there are no level 5 vehicles on public roadways. These are the vehicles Google is testing, where the steering wheel and the gas and brake pedals are removed and the driver has no way to physically drive the vehicle. Recently states have begun to debate legislation regarding self-driving vehicles. However, only four states have actually enacted any laws. In states that have not enacted laws, it does not mean these vehicles are illegal, just that they have not been specifically authorized for use on state roads. This is a large legal gray area. We hope this summit on autonomous vehicles will assist states in drafting policy that protects the public but also allows for this technology to develop and mature. Since 94 percent of crashes are caused by human error, the quickest way to get to zero injuries and fatalities on Connecticut roadways is to remove the driver from the process.

Q: Will I be able to buy a self-driving car any time soon or will they be largely limited to commercial fleets like Uber or the commercial trucking industry?

A: The legal and policy questions on this issue may hinder commercial sales of these vehicles more than the technology. Automotive manufacturers are promising commercially available vehicles as early as 2021. That is only four years away. There is significant work to be done to answer these questions, and the legal issues could have a major impact on public perception and acceptance of this technology.

There are several large elephants in the room that have yet to be addressed. For example, if your car is fully autonomous (i.e. no steering wheel or pedals) do you need auto insurance? Do you need a driver’s license? Are you liable in the event of a crash, or is the automaker? Does the automaker or the owner need to have insurance in the event of a crash? And will that liability coverage be something that would be included in the purchase price of the car? If the car is speeding, who gets the speeding ticket? Is it legal to “drive” under the influence when there is no steering wheel or brake pedal in your car? Or is the driver treated just like any other passenger? These are huge legal issues that need to be answered.

The future vision of this technology is that owning a personal vehicle will be a thing of the past. Services like Uber would have a large fleet of self-driving vehicles, and with your phone you could summon a vehicle and within minutes the car would be there to pick you up and drive you to your destination. As Americans, we are infatuated with our personal vehicles and use them as status symbols. It will be interesting to see if the public will accept the notion that we can have mobility without the need for owning a car. The self-driving car could make “public” transportation sexy.

Q: So many questions, so little time. I see now how important issues of insurance and liability are with this new technology. So who would be liable in a crash involving a self-driving car, and will I still need to have a driver’s license if I own one?

A: This is the million-dollar question. The general discussion is focused on auto insurance being a thing of the past, and that the automotive manufacturer will take on the responsibility of liability. However, that does not mean that the owner of such vehicles will not have to pay for insurance, but that it will be included in the purchase or lease price of the car. This is a hot topic at the state and federal level, and to be honest there is no clear answer at this point. The issue of the need for a driver’s license will need to evolve with the technology. The reality is that if a car is fully autonomous with no steering wheel or pedals then there is potentially no need for a driver’s license. However, drivers will need to be trained and certified in how to use these cars. Only time will tell whether the states will try to regulate this process or leave it up to the manufacturers or dealers to train and certify operators on the vehicles they sell.

Q: How can states prepare for the self-driving vehicles of the future?

A: Education is the key. The technology is evolving so rapidly that states and law enforcement need to be active and engaged in the process. The National Highway Traffic Safety Administration recently released a draft automated vehicle policy. States have been asked to review it and comment. The purpose of the Northeast Automated Vehicle Summit hosted by UConn and the CTDOT is to get states together to talk about these issues, and to learn what other states may be doing and how neighboring states may be looking at the potential impacts of these vehicles.

Q: Self-driving cars sound exciting. What benefits do they offer to our way of life besides the obvious one – convenience?

A: These vehicles offer the opportunity to revolutionize the way we travel and travel safely. For an aging population, these vehicles offer the ability to maintain mobility and independence. The connected – or smart – vehicle offers the ability to mitigate congestion and pollution through smart routing and alternative routes based on real-time traffic information. However, the most promising and exciting benefit would be the potential for safety improvements and crash reduction, mitigation, or even elimination.

Preliminary crash data for 2016 estimate that in the U.S. as many as 40,000 people died in motor vehicles crashes last year. That is a 6 percent rise from 2015. If accurate, that will equate to a 14 percent increase in traffic-related fatalities since 2014. With 94 percent of crashes being attributed to human error, this technology could be the silver bullet to achieve zero fatalities on our roadways. However, that would require a fully autonomous fleet and perfect software and hardware – both of which will take a significant amount of research, development, and policy to implement.

Q: As exciting as this technology is, it’s also kind of scary. We’re potentially allowing a computer, a robot, to operate a 3,500-pound machine at highway speeds and on roads shared with pedestrians, bicyclists, and others. That alone could be enough to give some people pause. What other things are safety engineers worried about?

A: Safety is the primary concern at this point. We have all had a computer freeze or word processed document become non-responsive. When that happens, the worst case scenario is that you lose some time and effort and have to redo your work. In a car, it becomes a matter of life and death. There are also safety concerns about cybersecurity and unwanted remote access and control of these vehicles.

The other big concern is the economic impact. Fewer car owners would cause a drop in property taxes for the state and towns. These vehicles will also impact the job market and people’s livelihoods. Taxi drivers, bus drivers, Uber, UPS, FedEx, and any other kind of delivery service could be replaced with automated vehicles. Trucking makes up the number one job in almost half of all U.S. states. According to estimates by the American Trucking Association, there are approximately 3.5 million professional truck drivers in the United States. If autonomous commercial vehicles replace even half of those drivers, that will have a substantial impact on local economies. The impacts would hit everything from hotels, truck stops, restaurants, and every part of the trucking industry that exists because humans need to take breaks and refuel while hauling cargo. The new fleet of trucks could drive nonstop coast-to-coast, with the only limitation being the size of the gas tank.

Q: Talking about self-driving cars is one thing, actually riding in one is another. Will getting people to give up control and put their trust in a driverless vehicle be another obstacle that must be overcome?

A: Public perception and adoption will be a function of the success and failures of early automated vehicles. This is why it is critical to get it right the first time without any major failures or fatalities. You will always have a small segment of the population that will never convert to this new technology. Flip phones still exist, and some people still do not own a cell phone at all. Trust will have to be earned and any early failures will set the technology back, outweighing any reported successes. Only time and a proven technology will ensure that the majority of the public will put their faith in these vehicles. It will be a long road, and I would be very surprised if even half the fleet is autonomous within the next 25 years. But here’s to hope and progress, and the potential to save 40,000 lives a year.