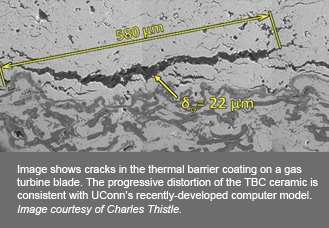 A team of UConn researchers is one of just nine selected nationwide by the U.S. Department of Energy (DOE) to develop advanced technologies that will lead to cleaner, more efficient conversion of coal into electricity.  UConn will receive nearly $500,000 from DOE, through the Office of Fossil Energy’s University Turbine Systems Research (UTSR) program, to carry out a three-year suite of research and educational activities.

The U.S., which has the largest coal reserves in the world – an estimated 22 percent of the total global supply – generates roughly half of its electricity from domestic coal.  Yet the extraction and conversion of coal into usable energy is an inherently dirty process that produces high levels of greenhouse gases, particulates and heavy metals implicated in global climate change and myriad health concerns.  Nonetheless, the ready availability and relatively low cost of coal, combined with advanced technologies for reducing coal emissions and pollutants, render coal an extremely attractive energy resource.

Most electricity is produced in power plants that use massive turbines to convert mechanical energy into electrical energy.  One advanced technology, integrated gasification combined cycle (IGCC), converts coal into a synthesized gas, dubbed “syngas,” removes impurities from the coal gas prior to combustion, and captures byproducts for possible use in other applications. Importantly, IGCC captures carbon and sulfur dioxide, heavy metals and particulates before they enter the environment, greatly reducing coal’s contribution to the depletion of Earth’s protective ozone.  It also presents an ideal opportunity for CO2 sequestration because syngas, when burned, produces water and CO2.

Leading the project is Dr. Eric Jordan, the United Technologies Professor of Advanced Materials and a professor of Mechanical Engineering at UConn. He is joined by UConn professor-in-residence Dr. Maurice Gell.

Dr. Jordan explains that gas turbines burn fuel at temperatures greater than 2,500 degrees F, well above the melting point of the alloys from which the turbines are made.  “To ensure the turbines survive being constantly exposed to these super-high temperatures, the engines are equipped with coolers that reduce the mean temperature of the turbines to below the melting point.  This significant advantage, however, is countered by reductions in overall engine efficiency and increases in the amount of fuel burned as well as the level of pollutants produced by the process.”

To address this dilemma, the gas turbine industry coats the turbines with a protective thermal barrier that will protect the alloy blades from the high combustion temperatures while improving engine efficiency and component durability. In the IGCC environment, there is a need for lower thermal conductivity coatings and coatings that can survive the increased water vapor content and the presence of small amounts of damaging contaminants.  Dr. Jordan previously developed a novel Solution Precursor Plasma Spray (SPPS) process that will be used to deposit specialized coatings having low thermal conductivity and high durability onto the surface of the turbine components, providing an insulating and protective layer over the alloys.