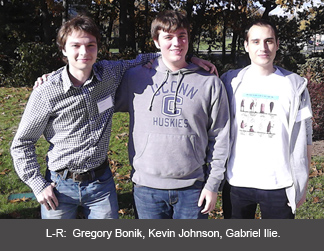 To prepare for the World Finals, the team meets every Sunday for four hours to develop their problem solving skills and strategies. They test themselves trying to solve problems that Professor Mandoiu provides and from online resources such as the Programming Challenges and Topcoder . The team has also been invited to participate in an expenses-paid trip to the University of Chicago Invitational Programming Contest open to North American teams that have qualified for the 2013 ICPC World Finals at the end of March. One of the goals of the program is to help teams in the North American super-region be more competitive in the World Finals by giving them a chance to train together in the same location.

The ACM ICPC is the oldest and largest computer programming competition in the world. According to the ACM website, since IBM became the sponsor of the ACM ICPC World Finals in 1997, ICPC participation has increased by more than 1100%. This year, ICPC participation included 29,479 of the finest students and faculty in computing disciplines from 2,322 universities from 91 countries on six continents. The World Finals, held June 30 -July 4 at St. Petersburg National Research University of Information Technologies, Mechanics, and Optics (ITMO), will host 120 world finalist teams that will compete for awards, prizes and bragging rights. These teams represent the best of the great universities on six continents. The contest consists of teams of three university students trying to solve eight or more complex real-world problems, all within a five-hour deadline. The team has the use of one computer, so while one student is on the computer, the other two are feverishly using pencil and paper to tackle other problems. Competitors race against the clock in a battle of logic, strategy and mental endurance.

To learn more about this competition and become involved with the UConn ACM Student Chapter, please visit http://acm.uconn.edu/. Every September there is an opportunity to sign up for online preliminary contests that challenge your problem solving and programming skills against other students at UConn and throughout North America. The UConn ACM Chapter, led this year by President Victor Chen, helps advertise these qualifier contests among students. Coaches, like Professor Mandoiu from the CSE Department, review the results and then pick the members of the team that represent UConn in the higher levels of ICPC.

When asked how he feels about the UConn team advancing to the World Finals, Professor Mandoiu replied,” I feel very proud of the team’s performance along with their hard work and dedication to the competition.” He advised that students who are interested in the competition need to have an excellent aptitude in algorithms, and also have a competitive and enthusiastic nature.