An interdisciplinary team of researchers from UConn and Georgia State University received more than $400,000 from the U.S. Department of Agriculture (USDA) to develop computational methods enabling the characterization of genomic diversity of a particularly contagious avian bronchial virus.  The disease costs U.S. poultry farmers millions of dollars each year in lost revenue. 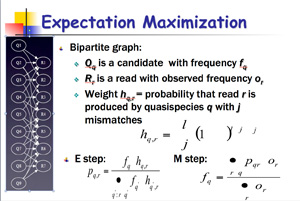 Dr. Ion Mandoiu, an associate professor of Computer Science & Engineering and the principal investigator on the project, is partnering with Drs. Mazhar I. Khan of Pathobiology & Veterinary Medicine, Rachel O’Neill of Molecular & Cell Biology, and Alex Zelikovsky of Georgia State University. The grant was made by USDA’s National Institute of Food & Agriculture.

The team is focusing on an infectious bronchitis virus (IBV) that is the biggest single cause of economic loss in the U.S. poultry industry.  While generally not fatal except among young chickens, IBV restricts growth in broiler chickens and reduces egg production in layers.  Like most bronchial diseases, it spreads rapidly in the dense living conditions found on most commercial poultry farms.

To reduce infection rates, farmers inoculate their poultry using live vaccines.  In live vaccines, the virulent portion has been removed or weakened, but enough of the viral material remains to produce an immune response in the animal.

Dr. Khan, who brings expertise as a pathobiologist, says “IBV is caused by a coronavirus.  One of the several proteins associated with it, called S1, is possibly the most antigenic and very vulnerable to point mutation.  In the U.S., the Massachusetts strain is the umbrella virus, so all vaccines against IBV contain modified live Massachusetts IBV blended with the local strain, which is designated as the name of the state in which the IBV variation is found.”

Chickens have to be vaccinated every year with this combination IBV because the virus mutates slightly from year to year. Dr. Khan notes “The vaccine provides broad but incomplete protection.  For this project, in my lab we will isolate the virus collected from the vaccinated birds, focusing specifically on the S1 gene, where the greatest share of genetic variations occurs.”

Dr. Mandoiu explains that IBV replicates via ribonucleic acid (RNA), not DNA.  RNA viruses are associated with very high mutation rates because RNA-polymerase, the enzyme responsible for copying the virus genome during replication, lacks what is known as “proofreading capability.”  This inability to self-correct genetic errors produces a great many more mutated versions of the original species. The chicken’s immune system simply cannot keep up with the barrage of attacks.  Consequently, within any one animal there will be many IBV quasispecies present, rendering the vaccine ineffectual and keeping the disease virulent.

A first step to developing more effective vaccines involves the identification of the different quasispecies and determination of the pace at which they evolve and replicate. “No one has actually measured how many quasispecies coexist in an organism,” says Dr. Mandoiu.  “Previous studies have involved cloning of the IBV virus, but this process results in maybe 20 quasispecies sequences within a single chicken. Experimental evidence suggests that quasispecies acting as a molecular memory can be present at frequencies as low as 0.1%, and these remain undetected by cloning-based approaches.”

Recent advances in high-throughput sequencing technologies eliminate the cloning bottleneck, generating millions of short sequence fragments, called “reads,” in a single run.  According to Dr. Mandoiu, reconstructing the full spectrum of viral quasispecies from these reads is a challenging computational problem due to the short read length and sequencing errors.  “It is a real challenge to distinguish true differences from sequencing errors” he says.  This USDA project builds upon his expertise in computational genomics, including his 2006 National Science Foundation Early Career Development (CAREER) award for work involving combinatorial algorithms for high-throughput collection and analysis of genomic diversity data. 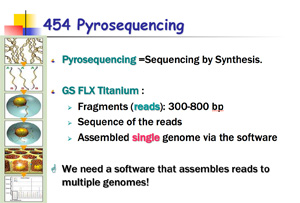 Dr. Zelikovsky, also a computer scientist, collaborates with Dr. Mandoiu in developing the sophisticated algorithms needed to piece together these short reads.  “The genetic profiles of different quasispecies are highly similar; two quasispecies sequences may differ at just a few nucleotides” says Dr. Zelikovsky.  “Existing assembly algorithms ignore such small differences, and produce a single ‘consensus’ sequence. Our goal is to reconstruct the complete collection of quasispecies sequences, and also estimate the frequency of each of them.”  A prototype version of these algorithms has already been tested with promising results on sequencing data for human viruses such as HIV and hepatitis C virus.

For the IBV project, the team plans to comprehensively characterize the myriad IBV quasispecies infecting large poultry flocks on commercial farms.  Dr. O’Neill, a genomicist, is interested in how genes and viruses evolve.  For this project, she says, “I’ll be doing the sequencing within the Center for Applied Genetics and Technology at UConn. We’ll be studying amplicons, which are subregions of the virus. Our platform for the sequencing is a 454 Genome Sequencer, which will allow us to sequence up to millions of individual viral sequences from one sample or across multiple samples simultaneously.”

The researchers will swab the throats of live chickens at a commercial poultry farm before vaccination and, subsequently, at one-week intervals for five weeks.  The samples will provide the genetic material for sequencing. “This is next-generation sequencing,” Dr. O’Neill remarks. “It’s an enormous leap over the old techniques, which were done in a serial fashion.  This technology is really the advent of personalized medicine.” She estimates that the process, from receipt of the swab samples until completion of the sequencing, will take just a few days.

Over the two years of the project, Dr. Mandoiu and his colleagues expect to develop user-friendly web-based bioinformatics tools that will be made available free of charge to the research community. This will allow other researchers to improve and customize the tools to their needs and create a community of users that will ensure long term maintenance and further developments.  Dr. Mandoiu projects that the tools will be applicable to the study of quasispecies evolution and vaccine design for many viruses affecting animal health, not only IBV in poultry.  In addition, he says the work will lead to improved diagnostics and monitoring of viral outbreaks in bird and animal populations, reduced vaccination costs, improved animal health, and improved yield of animal production.