Drs. Leslie Shor (CMBE) and Dan Gage (MCB) recently received two grants from the U.S. Department of Agriculture.  The two cross-disciplinary projects focus on different aspects of microbial activity in soil, leading to a better understanding of soil microbial activity that could inform agricultural management techniques.  One project, headed by Dr. Shor, is investigating how the production of a material called extracellular polymeric s

ubstance (EPS), combined with different soil structures, affects the water retention of soil.  The other project, directed by Dr. Gage, is aimed at determining how bacteria react to protozoan predation, which has important implications for nutrient cycling in the soil.

One of the predicted effects of climate change is increasing water stress in many areas. Water stress arises from rising average temperatures and from changes in the type, frequency, and intensity of weather events, including storms, heat waves and droughts. Soils having an aggregated structure can moderate moisture content between precipitation events.  In this soil composition, moisture is held tightly within aggregates but also drains easily between them.  Microbial production of EPS can also help soils moderate moisture content.  The potential for soils to moderate moisture, especially under heat and drought stress, will influence the effects of extreme weather on agricultural crop yields.

Drs. Shor and Gage will study how the combination of soil structures and microbial production of EPS, together, influence water retention in microfluidic flow cells. The researchers will introduce bacteria into microfluidic devices. The devices will have different pore structures that represent different levels of aggregation of soils, and the bacteria will be pure cultures that make different amounts or types of EPS. They will then subject the flows to carefully controlled temperature and humidity conditions, and study how the combined effects of soil structure and EPS production influences water retention in model porous media.

Nitrogen is required for many biological processes in plants, but plants are unable to directly capture the nitrogen found in air.  Instead they use alternate forms of nitrogen found in the soil, which are released when protozoa consume bacteria.  Thus, if more protozoa are able to consume more bacteria, there may be more nitrogen available for the plants, increasing their access to nutrients and improving agricultural yield.  The bacteria, however, have developed mechanisms to guard against protozoa grazing.  Drs. Gage and Shor aim to understand the process whereby bacteria sense protozoan predators.

First, using mass spectrometry, the researchers will attempt to discover the actual chemicals that induce a protective response in bacteria.  Using microfluidic devices, they will then systematically expose bacteria to each of the isolated chemicals individually.  If the bacteria respond as if protozoa were present, that will indicate an important signaling molecule has been identified. 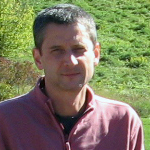 Next, the researchers will determine what genes in the bacteria code for the response to the signal.  Most of the bacteria (i.e., the wild-type strain) respond defensively to the presence of protozoa or its associated signaling molecules.  If, however, Dr. Gage and his team can identify bacteria that do not appear to respond to protozoa, it is probable that these strains possess mutations in their defensive responses. By comparing the genes of bacteria that do respond to predators to bacteria that do not respond, it may be possible to uncover the biochemical signaling mechanism whereby bacteria sense protozoan predators. One day, it may be possible to improve nutrient levels in soil by interfering with the predator-prey signaling mechanism among bacteria and protozoa.

As the world’s population increases, and the climate continues to undergo fluctuations, the need to understand the factors influencing agricultural production grows ever more urgent. While the research underway within the laboratories of Drs. Shor and Gage is fundamental in nature, research like theirs may one day lead to new technologies to improve crop yield, advances which can positively affect people across the world.