On Friday, April 29th, the School of Engineering held its first all-school senior design demonstration day, uniting all of the graduating seniors and their projects under one roof, in Gampel Pavilion at the Storrs campus. Before a large and attentive audience of students, sponsors, university officials, state policy makers, families and faculty, the expo began with a press conference at which legislators announced plans for a new academic-industry technology park to be constructed at UConn. 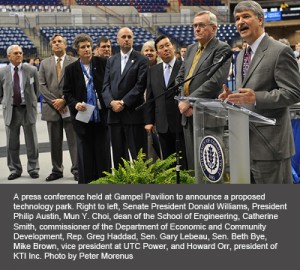 Connecticut Senate President Pro Tempore Donald E. Williams, Jr., announced a proposal to provide $18 million in bonding funds to support the design and site preparation for a technology park similar to the famed Research Triangle Park (RTP) in North Carolina.  He described his vision for the park, which would provide space and support services where businesses and academic researchers can collaborate to advance important new technologies, bringing much-needed high tech jobs to northeastern Connecticut’s “quiet corner.”

Senator Williams also announced that, building on the success of the Eminent Faculty Initiative in Sustainable Energy – a jobs program funded by the state and private sector that has enabled UConn to recruit 15 world-class energy researchers since 2008 – his budget proposal includes $2.5 million for a new “Innovation Partners Eminent Faculty Program.” The new initiative would allow UConn to attract top scholars and scientists in areas of advanced product development, information security and biomedical engineering. Learn more about the announcement here.

Noting that “A research and technology center in Storrs will provide companies with easy access to world-class metropolitan areas, specialized R&D equipment and a highly skilled workforce,” Senator Williams predicted the center will increase the number of private sector jobs in the region and provide students with singular educational and career opportunities.

Calling Gampel Pavilion the “court of champions” in basketball as well as manufacturing innovation  – alluding to the graduating engineers whose projects were displayed on the stadium floor – the speakers remarked that the proposed tech park will build momentum for the type of high tech corridor that distinguishes Rt. 128 in the Boston area, which serves as a magnet for highly innovative businesses such as pharmaceutical giant Pfizer, which recently announced plans to leave Connecticut for the Cambridge area. The most successful tech parks, including not only RTP but also New Haven’s Science Park, are located in close proximity to major research universities where businesses may readily interact with and leverage the resources of the academic environs.

Following the press conference, members of the audience were invited to explore the over-120 senior design team projects displayed in Gampel by engineering students from every discipline. The demonstrations are the grand finale to a process begun months before, when students embark on one- or two-semester projects, often in close association with an industrial mentor or other sponsor and a faculty advisor.  The projects immerse student teams in exploring a genuine design challenge – for example, a manufacturing plant floor problem or access issue for a disabled person.  Working with the sponsor and faculty advisor, the students typically consider a range of possible solutions before selecting one for prototype development and testing. The resulting device or process is then presented to the sponsor and demonstrated during the expo. Among the scores of projects displayed were the three profiled briefly below:

Among the 120 projects displayed was a “helicopter sonar unit load/upload fixture” developed for HABCO, a small Glastonbury, CT-based firm providing ground support and testing equipment to the U.S. military, defense and aerospace manufacturers, industrial and power generation providers, and medical device manufacturers. Team members John McBrien, Joseph Foster and Joe Davis – all Mechanical Engineering seniors – designed and constructed a prototype hoist intended to lift a nearly 400 pound sonar unit from a ship onto a helicopter.  They were advised by UConn professor Eric Jordan and HABCO engineer Vinay Patel.  The fixture is designed to incorporate collapsing features, enabling compact storage and loading door clearance aboard a frigate. A critical limitation for the team in designing the unit was the need to maintain stability in “sea state 3” conditions, which are characterized as having .5 to 1.25 meter wave heights. In addition to considering an optimal design, the students had to consider what materials offered greatest durability and strength for the hoist, caster treads, and hubs. The team tested their prototype and verified their calculations using finite element analysis. HABCO personnel are impressed with the prototype and have begun to show it to prospective customers.

A multi-institutional team sponsored by Energy Beam Sciences of East Granby, CT developed a tissue biopsy apparatus that may be installed in physicians’ offices for on-site tissue preparation. The team of BME students Michael Shannon and Honorio Valdes, joined by ME seniors Christopher Pelletier and Royce Labriola, also included Smith College students Chelsea Andrews and Iris Gonzales. The team developed a Lab Pulse Point of Care Tissue processor that takes on-site personnel through the major steps in sample preparation: fixation, dehydration and embedding.  These steps are typically completed at an off-site laboratory. The students explained that their apparatus will not only save valuable time in getting tissue sample results prepared for diagnostic analysis – thereby reducing patient anxiety – but will also reduce the potential for errors that can emerge in busy, high volume laboratories. The students were co-advised by UConn professor Thomas Barber and Smith professor Suzannah Howe, and by Product Manager Greg Tedeschi of Energy Beam Sciences.