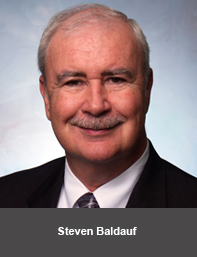 In the early 1990’s, 150 feet below ground in Waxahachie, Texas, the nation’s top engineers collaborated on a project of enormous scale: the construction of a superconducting super collider facility that would have exceeded the scope of CERN’s large hadron collider in Geneva, Switzerland.

Funded by the U.S. Department of Energy, giant tunnel boring machines with 14 foot diameter drill bits carved a loop of tunnels intended to house the facility.

But after two years of construction, in 1993, Congress pulled the plug on the funding of the super collider, re-directing national funding to the development of the international space station instead.

Today, the vast network of underground tunnels has been filled in, any possibility for the project’s revival erased.

Steven Baldauf, a 1974 UConn graduate, who was the supervising structural engineer of the super collider’s design team, called the project’s loss of funding a tragedy.

He described the super collider project as “huge in terms of scope and budget.”

Baldauf completed a five-year, dual program that earned him a bachelor of arts degree from Fairfield University and a bachelor’s of science degree in civil engineering from UConn.

After graduating, he was employed by a Manhattan based engineering firm, Gibbs & Hill, Inc. When the firm expanded to Dallas in 1978, Baldauf took the opportunity to relocate. Through evening classes, he earned a master’s degree in civil engineering from the University of Texas at Arlington in 1981.

He came to work on the super collider as an employee of the Dallas branch office of Parsons Brinkerhoff, which was awarded the project by the Department of Energy.

Baldauf quickly rose to manage between 40 and 50 other engineers as the structural supervisor of the project. “We prepared all the plans and specifications for the facility,” Baldauf said.

The superconducting super collider called for a series of underground tunnels through which scientists would accelerate atomic particles within two counter rotating circular paths, accelerated by two rings of powerful magnets.

“The magnets looked like torpedoes, each about 60 feet long and connected end to end,” Baldauf said.

In an area named as the interaction hall, the beams of particles were to be directed to collide in the presence of sophisticated detectors.

“Our country’s high energy physicists would have been conducting experiments on home court,” Baldauf said. “Now we must pay a fee to use the CERN facility so that our physicists have the right to get on the end of the line.”

Baldauf’s involvement in large-scale engineering projects such as the super collider enabled him to successfully launch his first engineering firm, Lee and Baldauf Consulting Engineers, in 1994. Today, Baldauf is president of Baldauf Herrin and Associates, a structural engineering firm in Dallas, Texas.