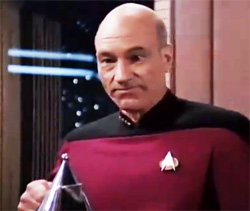 In the 24th century, starship Enterprise Captain Jean-Luc Picard need only utter four words to satisfy his jones for a cuppa.  A hundred years earlier, in the original series, the “replicator” produced only food; by The Next Generation, it was capable of creating anything.

We’re not there yet, but digital fabrication technology has us headed down the right path. The Replicator™ available today is a 3D printer designed and manufactured by MakerBot Industries, a privately held, venture-backed company headquartered in Brooklyn, New York.  About the size of a microwave and capable of making acrylonitrile butadiene styrene (ABS) and polylactic acid (PLA) objects as large as a loaf of bread, the Replicator is paving the way in the consumer market, building on momentum from the company’s two earlier product offerings:  CupCake CNC and Thing-O-Matic.

Driving this decades-old research and commercial technology into the personal market space is the MakerBot Thingiverse, an open license culture and community for freely sharing digital designs, the “pixie dust” for manufacturing 3D objects.  To make a 3D object you start with a computer-aided design (CAD) file created using a modeling program or scanned into a modeling program using a 3D scanner. The 3D printer software uses the file to slice the design into hundreds or thousands of thinly-sliced horizontal layers and provides exact specifications and instructions for the printer to re-assemble the layers seamlessly from bottom to top.  Voilà!  You have a three dimensional object.

On the other end of the spectrum, in the research and commercial world, micro-scale to room-size 3D printers are laying down far more than plastic and making more practical things than food and toys.  Scientists are bioprinting live cells and making things that quite literally can’t be made any other way because the manufacturing process would just be too complex.  3D printing promises to open new frontiers on design where complexity is eliminated as a barrier to expanding details and features.  A goal for researchers is to print a robot that walks off the printer under its own steam, complete with battery, actuators, motor and electronics – and they’re pretty close.  The MakerBot can print two materials at once but already there are printers that can handle five different materials.  Heart valves, spinal disks and cartilage are among the printed items available today for medical implantation.  The future holds incredible possibility for 3D printing any materials that may be melted, squeezed or powered.  The technology will go as far as human imagination will take it.

So, the question is this, if you had $1749 burning a hole in your pocket and time to spare, what thing would you make?  To get some ideas you only need visit the Thingiverse and explore the world of things – some whimsical, some practical, some just weird.  Reading through the descriptions written by designers, their pride, effort, ingenuity, humor and eccentricity are inescapable.  These aren’t your average bears.  These are hobbyists and professional designers for many of whom the MakerBot is their second or third 3D printer.  And most likely they started with a version they had to assemble, like a Heathkit.

When I started hearing 3D printing discussed in popular literature and media, I wondered why anyone would want to own one.  Then I remembered a very smart colleague in 1982 asking, with exasperation, why would anyone want to own a home computer, what would they do with it?  I feel the sudden urge to buy one.