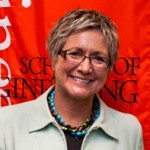 The Academy of Motion Pictures Arts and Sciences got it wrong.  No, it’s not about Jean Dujardin beating out best buds George Clooney and Brad Pitt to win Best Actor by uttering just two words or missing the chance for an Octavia Spencer and Viola Davis double header for their fabulous performances in The Help.  For 81 years, the Academy has missed a brilliant opportunity to showcase and bring national attention to real stars.  Smart stars.  Nerd stars.

On Oscar Sunday, the highly creative, technical and entrepreneurial stars, whose discoveries and innovations, according to their website “contributed in significant, outstanding and lasting ways to motion pictures,” were marginalized and squeezed into a shorter-than-a-punchline mention tucked into the end of the show.  If you blinked or got up for a Bud, you missed it.  The green eyeshades from PricewaterhouseCoopers, the firm “safeguarding Hollywood’s best kept secret,” got more face time than the people who put Sciences in the Academy of Motion Pictures Arts and Sciences.  If we want to attract more kids to pursue STEM (Science, Technology, Engineering, Mathematics) careers, what better venue than the nationally televised, über-hyped Academy Awards ceremony to recognize the work of stars in those fields as cool and sexy?

On February 11, at a separate-but-equal presentation ceremony hosted by Milla Jovovich at the Beverly Wilshire Hotel, 10 Scientific and Technical Awards were made to 29 individual award recipients.  The men wore tuxes, women wore gowns, there was a red carpet and a three-song set including Oscar-winning “Falling Slowly” performed by Glen Hansard (from the Irish band, The Frames) and Markéta Irglová (classically trained Czech pianist and vocalist), two of four members of the band, The Swell Season and stars of the 2007 movie “Once.”  But there was no live broadcast and you won’t see the ceremony or learn about the winners unless you Google it.  You won’t see the amazing inventions and teams of scientists and engineers, many of whom labored a lifetime to deliver new technologies and innovations that make the movies magic and help to propel, both literally and figuratively, a $10B industry, one that the U.S. still leads on the world stage.

What if it were the other way round?  What if the Sci-Tech Awards were showcased Oscar Sunday, with all of the attendant fanfare and hoopla?  The scientific and engineering rags would announce the nominations, technical journalists would interview and write profiles of the “backroom boys” and television advertisements for the ceremony would feature action packed “trailers” of the nominated technologies operating behind the limelight.  Wouldn’t that be a cool and sexy advertisement for sci-tech careers?  Wouldn’t that get more kids jazzed about science and engineering?

This year’s John A. Bonner Medal of Commendation winner, visual effects technologist Jonathan Erland, shared a quote by screenwriter and director William C. deMille in his acceptance speech: “If we don’t get the science first, you ain’t gonna get no art.”  Grammar aside, I love the sentiment.  I bet there were a few protectors in those pockets, sporting silk squares.  Sexy.

Here’s a list of this year’s Sci-Tech Awards recipients:

Technical Achievement Awards (Academy Certificates)
Andrew Clinton and Mark Elendt for the invention and integration of micro-voxels in the Mantra software.

Dr. Jurgen Noffke for the optical design and Uwe Weber for the mechanical design of the ARRI Zeiss Master Prime Lenses for motion picture photography.

John D. Lowry, Ian Caven, Ian Godin, Kimball Thurston and Tim Connolly for the development of a unique and efficient system for the reduction of noise and other artifacts, thereby providing high-quality images required by the filmmaking process.

Fujifilm Corporation, Hideyuki Shirai, Dr. Katsuhisa Oozeki and Hiroshi Hirano for the design and development of the Fujifilm black and white recording film ETERNA-RDS 4791 for use in the archival preservation of film and digital images.

Academy Award of Merit (Oscar Statuette)
Franz Kraus, Johannes Steurer and Wolfgang Riedel for the design and development of the ARRILASER Film Recorder.