The Sounds of Innovation: How UConn Research Is Resurrecting Antique Musical Instruments

By Kenneth Best and Bret Eckhardt

This article was first published in the Fall 2014 print edition of UConn Magazine. To read more stories like this, visit s.uconn.edu/fall14 or download UConn Magazine’s free app for iPads.

In our modern age of specialization, it is increasingly rare to find the kind of individual who, in another age, would have been known as a Renaissance man or a polymath. The likes of Leonardo da Vinci, recognized for his painting as well as his scientific inventions; Michelangelo, famous as a painter, architect, and poet; or Benjamin Franklin, the scientist, politician, and author, were renowned for their expertise across several disciplines — and their ability to apply their diverse knowledge to solve problems.

Before completing his medical degree from the UConn School of Medicine, Robert Howe ’82 MD had already been heading toward a life of wide curiosity and inquiry, earning dual  undergraduate degrees in chemistry and music through a joint program between Case Western Reserve University and the Cleveland Institute of Music.

While establishing his medical practice — today he is medical director of Maple Street Medical Group in East Longmeadow, Mass. — Howe also pursued his interest in the construction of antique woodwind instruments, particularly the oboe, which he had studied as a student. Over the past two decades, he has conducted research and published his findings in scholarly music journals such as The American Musical Instrument Society and The Double Reed. 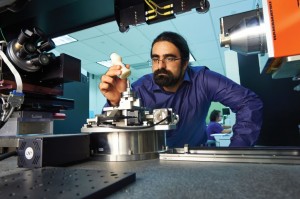 In recent years, Howe has accelerated his interest in studying music more formally. Now a Ph.D. candidate in UConn’s School of Fine Arts, he shared his ideas with his doctoral advisor, Richard Bass, professor of music theory in the Department of Music, and the two have since orchestrated an unprecedented collaborative effort between musicians and engineers at the University, using a technology typically exclusive to medical science — micro-computed tomography — to explore the makeup of 18th- and 19th-century musical instruments.

Printing Musical Instruments in 3-D
Using the technology in this way for the first time is providing researchers with precise measurements to within thousandths of a millimeter for parts of antique instruments such as the saxophone and recorder. Howe and his fellow UConn researchers say their findings have resulted in the unprecedented replication of instrument parts — using 3-D printing — that could allow instruments hundreds of years old to be played once again while providing security authentication for rare instruments held by collectors and museums.

Their findings were published earlier this year in academic and scientific journals and at conferences, including the Sax 200 Bicentenary Conference in Brussels in July, where Adolphe Sax, the Belgian instrument maker who invented the saxophone, was celebrated during a series of events marking the 200th anniversary of his birth.

“The impetus behind the study was to find a way to get better copies of the original antiques without subjecting them to any risks and subjecting the process to the errors of measurement by hand,” says Howe. “The thought is that if one can take a hands-off set of measurements and then replicate the instrument directly, can one get a more accurate representation of the original? I would hope so.”

owe and Bass have been working with Sina Shahbazmohamadi ’13 Ph.D., who is now an assistant professor at Manhattan College in Bronx, N.Y. Shahbazmohamadi developed a new method for using micro-computed tomography to examine antique wind instruments and their parts made of wood, metal, brass, leather, and other materials.

The researchers are using scientific equipment at UConn’s Center for Clean Energy  Engineering to study the antique instruments, including a 1770 recorder made in London  by Thomas Cahusac and saxophones made by Adolphe Sax. Other study instruments are a curved English horn constructed by Frederic Triebert in Paris circa 1840 and the only known wooden mouthpiece of an ophicleide — a 19th-century brass instrument similar to a tuba — made circa 1830 by Charles Sax, father of Adolphe.

In noting the range of initial findings uncovered by the study, Howe cites the example of  the Cahusac recorder. Measurements were taken of the original recorder using traditional methods, and a craftsman created an entirely new recorder based on the three pieces of the instrument — a mouthpiece, a resonator tube with sound holes, and a foot piece, which also has a sound hole. The foot of the 1770 recorder was scanned using micro-computed tomography, which revealed cracks, warping, and other imperfections in the original wood that developed from use and aging over time.

Using a program designed by Shahbazmohamadi, three versions of the foot piece were created with additive manufacturing technology, commonly known as 3-D printing. One was an exact reproduction of the original foot, complete with its flaws. A second was a foot piece that corrected the flaws, and the third was a corrected foot with lighter porosity — density — than the original.

Shahbazmohamadi says the high resolution of the micro-computed tomography equipment, which can only scan objects of a limited dimension, requires multiple scans of instrument parts.

“The machine goes up to half a micron. You can’t do it by one image session,” he says. “We had to do stitching. We did the top part, then the bottom part, and used an algorithm to stitch them together.”

Once the digital image of the recorder part was completed, a stereolithography file was created to allow the process of polymerization to create the three-dimensional replica of the recorder’s foot. 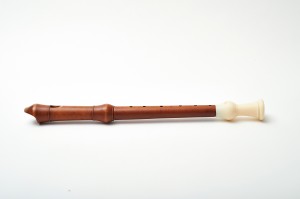 A 1770 recorder made by Thomas Cahusac, with a foot piece made by Sina Shahbazmohamadi ’13 Ph.D. using 3-D printing. (Sean Flynn/UConn Photo)

“It won’t support the lowest note. There’s not enough mass [in the foot piece],” Howe says. “It tells us not to make a replica out of insufficiently dense material. Woodwind musicians have argued whether the type of wood or plastic matters in the response and sound of an instrument. We have demonstrated that if a particular density is unable to make a functioning musical instrument, then it must matter.”

As They Were Meant to Be Heard
Creating missing parts of centuries-old instruments so they can be played today is another area the UConn researchers are exploring. Howe notes that while there are several saxophones made by Sax that sit in museums, they are missing the proper wooden mouthpiece and cannot be played.

The researchers have access to an original mouthpiece created by Sax for a B-fl at tenor saxophone and believe that if they can scan that part, they can proportionately scale it for  six original Sax instruments of varied tones — and then use 3-D printing to create appropriate mouthpieces so they once again can be played.

“It could be a security method for instruments. For example, if we could make 3-D images or copies of some essential parts of an instrument and it gets stolen, we could verify it’s that instrument if it turns up somewhere else,” Bass says. “If we have an exact copy of a piece of that instrument in a vault, there’s real potential for museums and collectors to authenticate and protect their collections.”

According to Eric Rice, head of UConn’s Department of Music and artistic director for the annual Connecticut Early Music Festival, learning more about the construction of antique instruments will also assist in the presentation of early music so that today’s audiences can hear works of composers such as Bach or Beethoven as they would have sounded two centuries ago.

“To figure out how these instruments were constructed and to establish why they sound the way they do and why they are as successful as instruments is important,” says Rice. “You can’t look in the historical record. This research enlists modern technology to allow a dissection of the instrument just as you would do with a mummy that you would like to learn more about but cannot take apart.”