Three Generations of Engineering at UConn

When Robert Valley Sr. entered the doors of Castleman in 1946, he did not know that he was starting a legacy. Now – almost 70 years later – three members of the family have walked through those doors and graduated in 1950, 1978 and 1981. And another generation is expected to graduate in May of 2016. 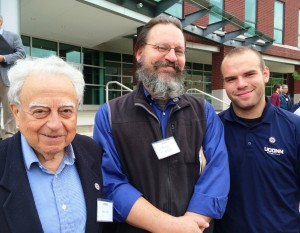 For Robert Sr., engineering seemed natural. He had always wanted to be an engineer.  “Early on, I got into ham radios,” he said. “It  was fascinating to have a piece of block and a coil and some headphones and tune into your local radio station.” Those days of tinkering were a great time for people with an engineering bent. But today’s devices are too complex, said the Branford resident. “You can’t even take them apart and understand what’s inside. The circuitry is not accessible.”

His son, Robert Valley Jr., chief engineer with Branford-based Analytica, recently acquired by PerkinElmer, felt the same affinity for Engineering. “It just seemed to be the appropriate path,” said the man who started his own business at age 15. Bob Jr. created “Rapid Robert’s Repair Services,” during a summer vacation to fix tape recorders for SoundScriber Corp., then his father’s company. From there, the path was natural. Bob Jr. graduated from UConn with a degree in Electrical Engineering in 1978 without even discussing it with his father, the men said.

The legacy does not stop there. Robert Sr.’s daughter Diane met her future husband Stephen Mierz here at UConn. He graduated in 1981 with a Mechanical Engineering and Materials Engineering degree. Steve caught the engineering bug from his father, who did engineering work, but did not have a degree. His father encouraged Steve to pursue his degree so that he would have more career options.

Taking his father’s advice, he attended Engineering career fairs and met with Sikorsky, where he has worked ever since. He now handles forensic engineering, inspecting brakes, wheels and other parts that have failed, and figures out how each failure occurred. “At the end of the day, to be contributing to something that makes the company more successful, that’s a good feeling,” he said. “Money’s good, but I think you need to have job satisfaction that makes every day interesting and fun.”

Steve’s worn a lot of different hats at Sikorsky, and advises his son and other UConn Engineering students to be adventurous and flexible. “Be open to things at whatever company you go to,” he said. “Don’t decide that you’re going to do just one thing. Be open to possibilities. There is a lot of neat stuff that you can do, especially if you go to a big company.”

His son, Matt Mierz, who’s carrying on the family legacy at UConn, is scheduled to graduate next year with a degree in Mechanical Engineering. Matt said he and the elder engineers in his family will occasionally talk about how the field has changed, and how much the UConn Engineering School has expanded. His interest in engineering includes cars and motorcycles. “I went into it because I enjoyed it.”

The UConn School of Engineering is proud of the families making engineering a part of their family tradition.  Alumni and students who are the children, grandchildren, parents, grandparents or siblings of School of Engineering graduates are legacies.  Please keep in touch with your School and confirm your legacy status with the Director of Engineering Alumni Relations, Heidi Douglas (hdouglas@engineer.uconn.edu).  We hope to hear from you.