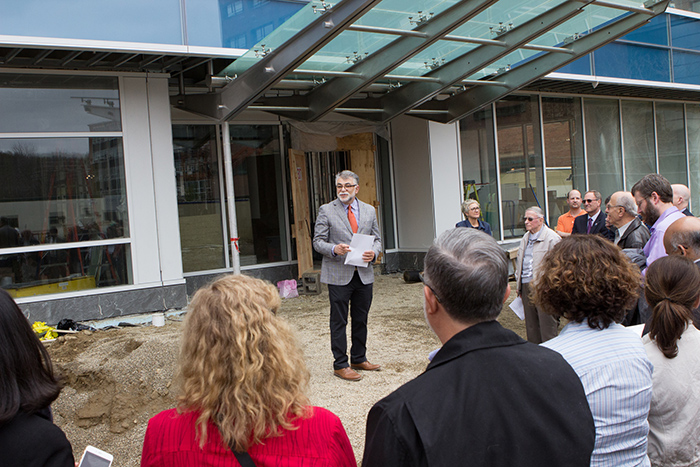 A little more than 100 years after UConn Engineering first offered a four-year degree, the School sealed and buried a time capsule that will be opened in another 100 years on the grounds of the new Engineering and Science Building.

During the closing event of Engineering’s year-long Centennial Celebration, more than 40 faculty, staff, deans, and emeritus faculty members watched as the time capsule – the most recent time capsule on UConn’s main campus – was placed in a special cement container. 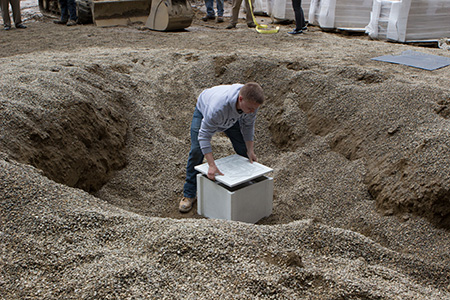 Among the officials who spoke during the ceremony, engineering dean Kazem Kazerounian discussed the importance of physical artifacts in triggering memories.

“We all believe and hope that we will continue living in memories, and nothing is a stronger key to memories than artifacts,” Kazerounian said. “The artifacts that we are placing in this capsule are the results of many decades, if not centuries, of the technological evolution of the human race. I would give anything to know what people will think about these artifacts 100 years from now.”

What’s in the Box?

Both the time capsule itself and the ceremony were organized by Heidi Douglas ’77 (CLAS and UConn Engineering Academy of Distinguished Engineers), director of alumni relations for the School.

The capsule holds some current technology developed at UConn, such as a superconductor fabricated by Materials Science and Engineering, electrodes from Biomedical Engineering, and a couple of 3-D printed objects from the Mechanical Engineering Department and the Additive Manufacturing Center. 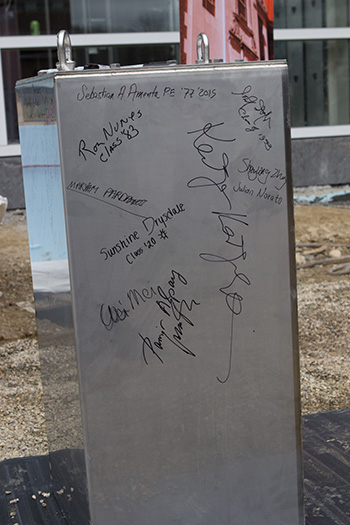 Attendees signed the capsule before it was lowered into the concrete vault. (Christopher LaRosa/UConn Photo)

Other items include a flag that was taken to the International Space Station by Richard Mastracchio ’82 (ENG), a slide rule, a UConn recruitment video from the late 1990s, and a Nokia cell phone from 1980s that originally sold for $3,000. More than 60 items in total were buried. See the list here.

Buried Next to Cutting-Edge Research

The capsule is buried in front of the new Engineering & Science Building, which opens this fall. Engineering will occupy three of the five stories of the building. Senior associate dean of UConn Engineering Michael Accorsi said the layout of the new structure will encourage collaborative research by having an entirely open working environment.

“The building has no interior walls,” Accorsi said. “There’s a common central area in the middle for shared facilities and shared lab space, with workbenches around the perimeter for students so they can work individually and then share the common area.”

Each floor occupied by Engineering will have a different research theme: the first floor is dedicated to cyber physical systems, robotics, autonomous vehicles, and augmented reality; the fourth floor is devoted to biomaterials and biodevices; and the fifth floor will contain energy systems, and environmental and chemical processes. Each floor will support about 60 to 70 graduate students and 10 faculty members.