An unlikely combination of biomedical engineering and meticulous sewing skills has led to an innovative heart valve replacement that could save countless lives.

This summer, Sirois and his research team enjoyed a particularly eventful week, when the company received two major awards, each worth $400,000. One was from the Connecticut Bioscience Innovation Fund (CBIF); the second was a federal Small Business Innovation Research (SBIR) grant. The funding will enable the team to begin testing the product. 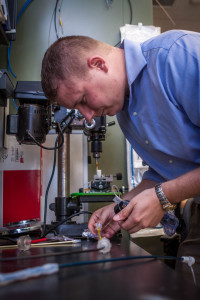 Since the company was founded in 2012, Dura Biotech has focused on potentially game-changing innovations in the field of heart valves. One is the LowPro Valve, a transcatheter aortic valve 40 percent smaller than anything on the market.

Because the catheter enters the femoral artery in the groin, patients don’t need to undergo open heart surgery, a procedure that takes several weeks of recovery time and can pose great risks for many patients.

Catheters are traditionally measured in units known as French (one is equal to about one-third of a millimeter). Those on the market today are about 22 French.

“The next generation is about 18,” says Sirois, “and ours is 14.” And with the recent funding, part of which will pay for animal testing, Sirois is confident they can bring the size down to 12 French.

Smaller is important. It has been estimated that about 17,000 patients this year can’t have the procedure because their arteries are too small for currently available catheters.

“We’re targeting older people, but we’re thinking about using it for children, too, because many children are born with heart defects, but current valves are too large for them,” he says. 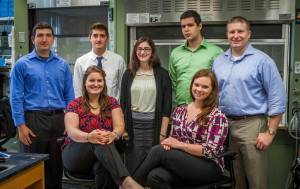 Sirois is a veteran of the U.S. Navy. While he was figuring out what he wanted to do in his civilian life, he learned that UConn had one of the leading biomedical engineering departments in the U.S. That appealed to him, and he came to the University in 2005.

“I like analyzing systems,” he says, “and I wanted to look at the body like a machine.”

During his graduate studies, he enrolled in the entrepreneur program, taught by Hadi Bozorgmanesh, professor of practice in the School of Engineering.

“I always knew I wanted to be an entrepreneur, I just figured that you have to go out into industry for 15 years or so first and then come back,” Sirois says. “But Hadi has a whole different way of looking at it: ‘Don’t put off for one minute what you can start right now.’ So, we founded the company and I haven’t looked back since.”

Bozorgmanesh is confident Sirois can lead the company to success. He notes that while Sirois is “totally focused” on making Dura Biotech a success, he also spends time helping other start-ups and inspiring undergraduate students to become entrepreneurs. 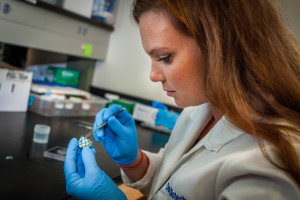 When Sirois founded Dura Biotech in 2012 with Wei Sun, a former associate professor at UConn, the original idea wasn’t to make a smaller valve, but a longer-lasting one (hence the “Dura” in the company’s name). They created the Dura Heart Valve, a valve that lasts four times longer than valves currently on the market.

Last October, Sirois and his team took the Dura Heart Valve to the biggest transcatheter conference in the U.S. The company’s poster was voted among the best, but drumming up interest in the product itself wasn’t so easy.

“We talked to the doctors – and they all didn’t care,” Sirois says. “Everyone agreed that it was indeed more durable. But they also pointed out that most of their patients are old, so the valve’s extended life span wasn’t a big draw.”

For an extra dose of discouragement, an investor told them that clinical trials specifically testing for durability take up to eight years.

“And they’re super-expensive,” Sirois says. “Instead of $7 million, it would cost about $300 million. No one’s going to invest in that. We were heartbroken, but some people suggested that if you could make it thicker and last four times as long, why not make it thinner and last the same amount of time?”

So they got to work on that. The secret is in the “crimped delivery” design, in which part of the valve’s material – the leaflet – is made thinner. With less material in the way, the valve can crimp more narrowly. A patent is pending on the technology.

Sewing up the solution

Assembling the design requires sewing together three of the valve’s main components. Considering the size of the components and the precision required, this is no easy task.

Sirois, who had learned to sew uniforms in the military, tried making the valves himself. But they are tiny, and they have to be perfect.

So the team hired two lab technicians, Andrea Mandragouras and Jaclyn Mazzarella, who finally, after many, many attempts, perfected the necessary sewing technique.

The change in strategy paid off. Within three months, they had a prototype, a marketing strategy, and a marketing niche carved out. They soon won a $10,000 Entrepreneur Innovation Award from CT Next, and a $50,000 Third Bridge award from the quasi-state organization Connecticut Innovation. And now, they have an additional $800,000 in recent awards.

Sirois says the company hopes to raise seed investments of $2 to $3 million next year. He estimates that the company will need at least $10 million to get his device through regulatory approval in Europe.