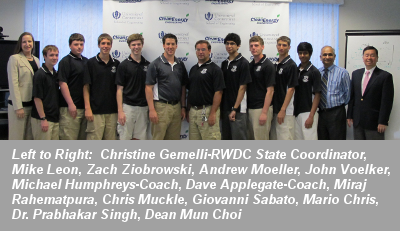 During the team’s visit to campus, Pete Menard of C2E2, along with other Center personnel, spoke with the Xavier students on a range of sustainable energy topics, from the smart grid and micro-grids to strategies for reducing the cost of solar cells, advantages and features of different fuel cell technologies, and the role of nanomaterials in catalysis.  The Falcons particularly enjoyed a fuel-cell powered go-kart and battery electric hybrid cars, which sparked a discussion of the role of engineering in helping to solve the energy puzzle.

“We were delighted to host such an accomplished and enthusiastic group,” said Tricia Bergman, C2E2’s Executive Program Director.  The center regularly opens its doors to school groups, legislators, international researchers and industry professionals to enhance awareness of sustainable energy technologies, encourage students to pursue careers in energy, and to foster collaborative opportunities.

The three-year old Real World Design Challenge is a national aviation design competition for high school students run by a public-private partnership, with the goal of increasing the science, technology, engineering and mathematics (STEM) workforce.  Following state-level contests, 20 teams participated in the national competition held in April. The top three teams then presented their final solutions before a panel of judges from the governmental, academic and industrial sectors. The awards were presented April 16 at the Smithsonian’s National Air and Space Museum in Washington, DC.

The Xavier Falcons were advised by teacher Mike Humphreys, along with State Coordinator Christine Gemelli of the Connecticut Office for Workforce Competitiveness.

UConn Engineering is no stranger to Mr. Humphreys, who has participated in two teacher enrichment programs at UConn: the da Vinci Project and Joule Fellows program, both of which embed teachers in faculty research laboratories for hands-on, unique learning opportunities they impart to their own middle and high school classrooms.  As a summer 2010 Joule Fellow, Mr. Humphreys collaborated on research involving an electrochemical reactor for spontaneous power conversion and CO2 capture.

“As a STEM teacher I found both programs, and especially the Joule Fellows program, to be a terrific experience,” he said. “The ability to apply principles toward the design and construction of something tangible is what makes engineering so exciting. It’s that thrill of discovery and problem solving that I strive to convey to my students.”

Clearly, the champion Xavier Falcons have caught the innovation bug.